Basque bicycle company Orbea started life in 1840 and is celebrating its 175th birthday this year. It’s a milestone few companies can match and, of those that come closest, Smith & Wesson (founded in 1852) and Jack Daniels (1875) are the biggest names.

Orbea, like Smith & Wesson, began by making guns but eventually branched out into building bikes. Since making that switch in the 1930s it’s become the brand behind the race machines of multiple-mountain bike world and Olympic champion Julien Absalon, 2008 Olympic road race champion Samuel Sanchez and the man with the fastest bike splits in long-distance triathlon, Andrew Starykowicz.

And the machine Starykowicz posted his record-breaking 4:02:39 bike split on at 2012’s Ironman Florida was the Orbea Ordu. The Ordu first appeared in 2007 and its design has continued to evolve since then, resulting in the Ordu OMP – the fifth-generation of the bike that Orbea officially unveiled at Challenge Roth in July of this year. 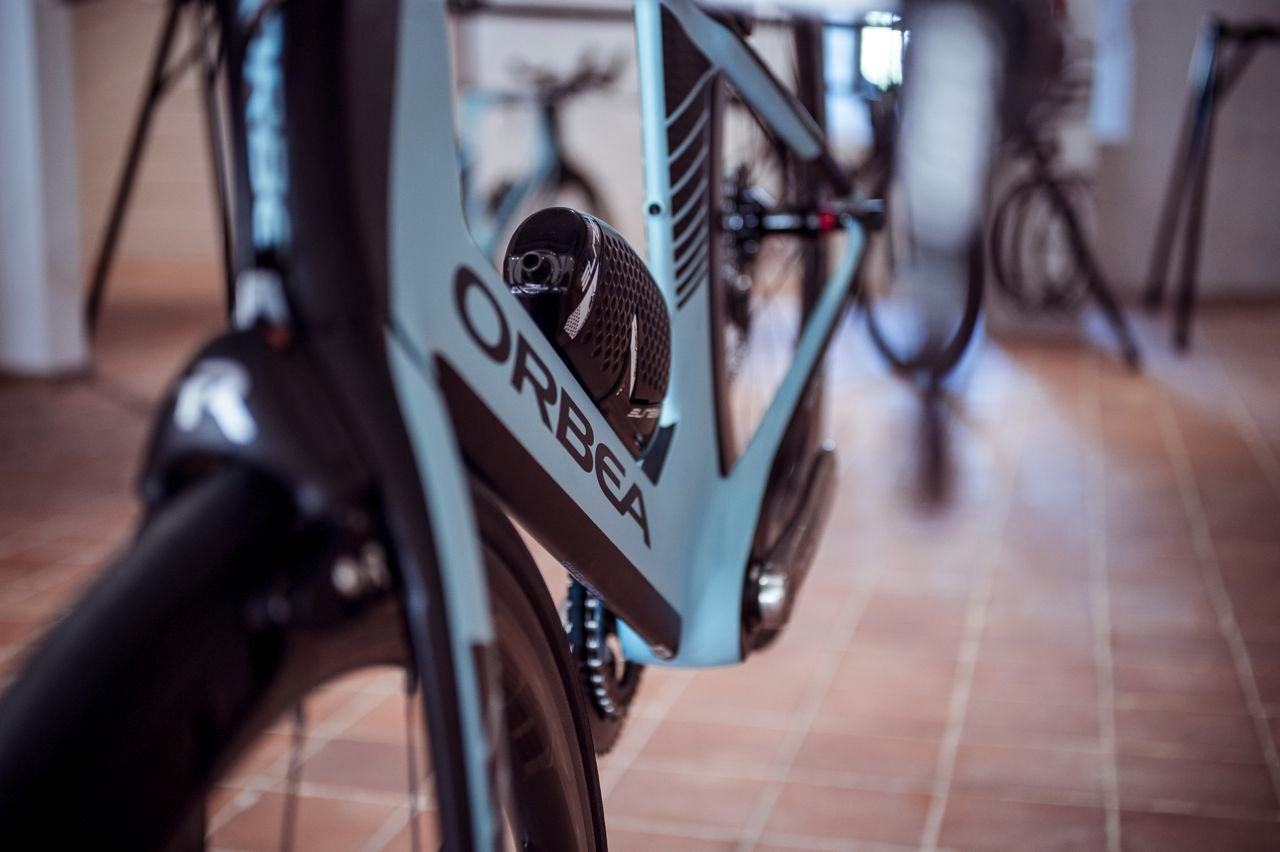 It’s a UCI-legal frame (and was ridden by the Cofidis team in this year’s Tour de France time trials) but was developed with input from starykowicz, who besides being an elite-level triathlete is also a mechanical engineer. It’s been progressing from drawing boards to 3D-printed prototypes to final product for almost three years.

During that time it’s had its rough-edges smoothed off and polished in North Carolina’s A2 Wind Tunnel and the new tunnel recently established at Mondragon University in the Basque Country, near Orbea’s HQ.

Obviously, one of the priorities for the new Ordu was aerodynamics, and the new frame features tube profiles that have flattened sides that taper towards an abbreviated, squared-off tail. “We’re calling them Mondragon tube shapes,” explains Scott Warren, Orbea’s product manager, “because Mondragon University help us design them. Each tube within this bicycle is unique in its shape for where it is in regard to the wind, yaw angle and overall frame stiffness.”

Each of the frame’s tubes may be tailored to its specific position but it’s the front end of the new Ordu that has changed most dramatically, having been both narrowed at the head tube and widened at the fork.

“We’ve reduced the frontal area of the head tube by 10%,” Warren continues. “That doesn’t sound like a lot – it’s only 3mm or so – but every little bit matters, especially when you’re trying to reduce and save every gram. So the new Ordu has a mini tapered head tube: it’s 2.85cm at the bottom and tapers to 2.54cm at the top. [But] you can still use any conventional 2.85cm stem with it, as we provide a shim to take the steerer tube to that diameter. It doesn’t use a proprietary stem and doesn’t make you try to find a 2.5cm stem in the marketplace.” 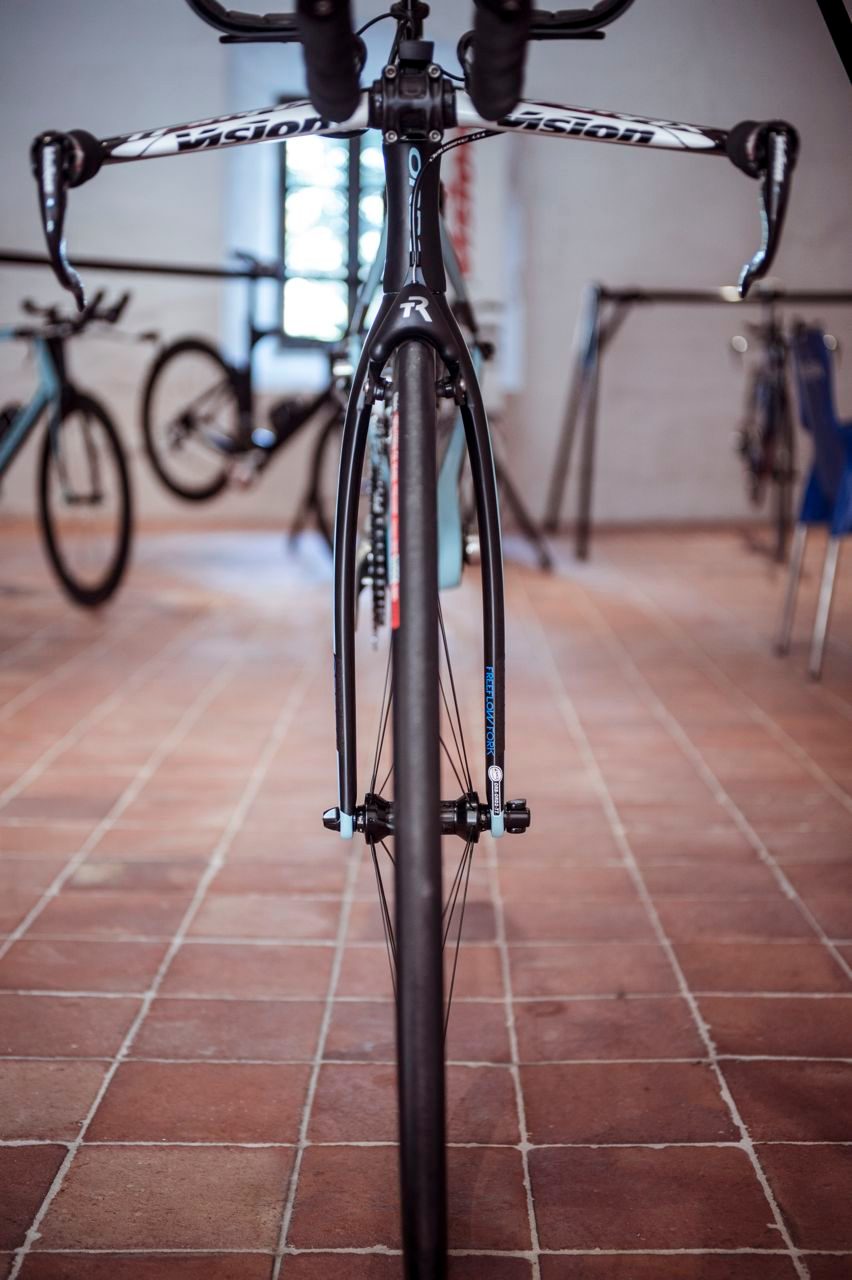 The Ordu’s fork, meanwhile, has expanded and now has a new shape, with legs that splay outwards from a wider crown, and a new name, the ‘Freeflow fork’, to go with it. Warren explains the thinking behind it: “My theory was that today’s wheels are getting wider and they’re generally getting deeper. Also tyres are getting wider and I was curious as to how that was working with conventional fork spacing… I was curious how the interaction with the wind would affect the whole aerodynamic equation and the handling of the bike if we made the fork legs much wider.

“We finally landed on this particular design and it’s very fast, especially if you’re riding a deeper-section wheel. It’s aerodynamically superior. If you’re riding an 8mm-deep wheel with a wide rim bed and wide tyre, the Freeflow fork performs better than a narrow fork.”

What the Ordu’s front end also has is a head tube that’s lower than the top tube, to keep whatever stem you choose to use as level with the top of the frame as possible. The Ordu also comes with a ‘stem cape’ (it was 3D printed on the test bike but will be carbon on the production models) that shrouds the back end of the stem and any exposed clamp bolts to provide a flush junction. It’s a small part but the engineers at Orbea found it had a benefit, both aerodynamically and aesthetically.

Attached to the front and back of the bike, in the conventional, easy-to-reach places, is an aero brake that first appeared in 2012 and until the launch of this new Ordu, has never been specced as standard on a bike. 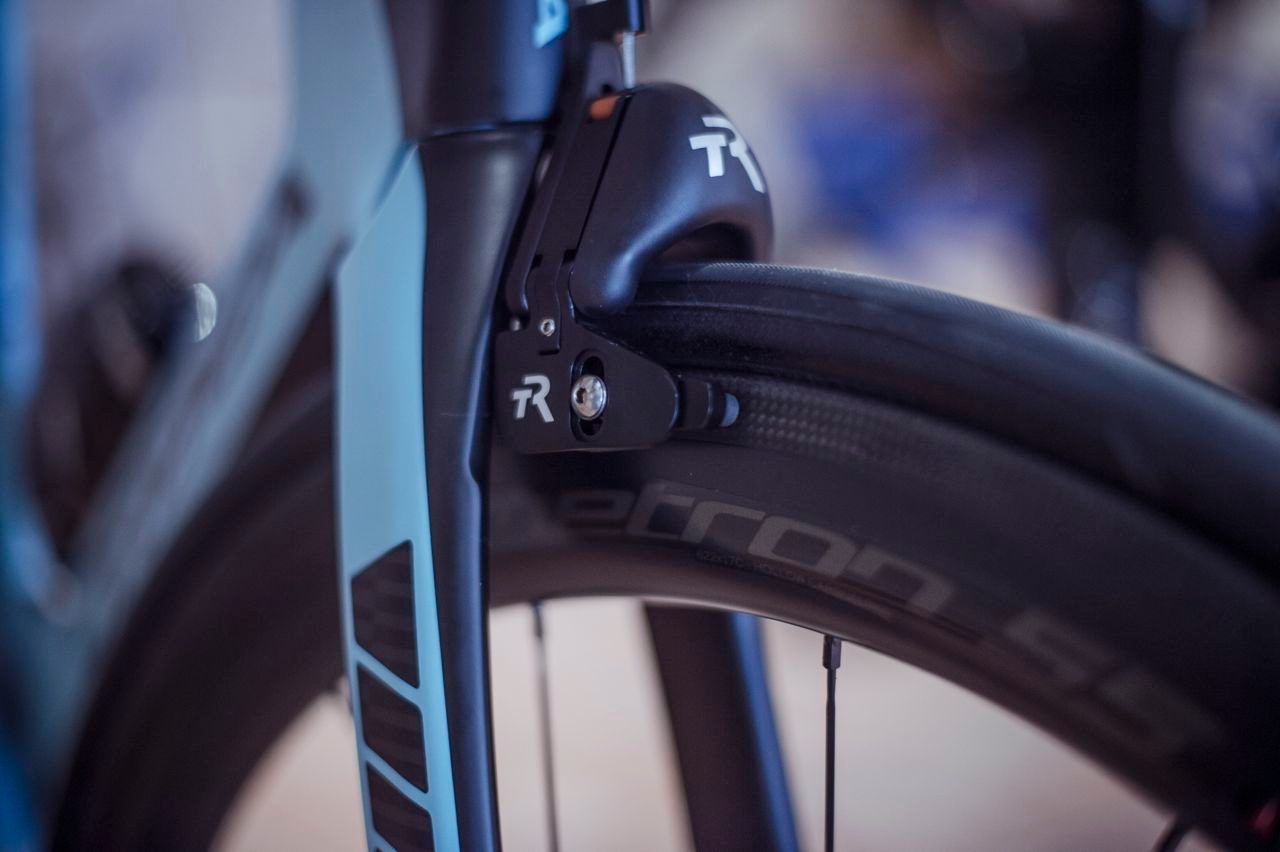 Often a “recipe for trouble”, we found the aero brakes paired with carbon wheels had smooth and controlled stopping power

The Tri Rig Omega X is possibly the most practical and user-friendly aero brake available on the market, incorporating a centre-pull wedge brake that incorporates some brilliant features.

For a start, instead of being bolted on, the brake’s aero cover is held in place by neodymium magnets. Made from the same rare-earth metal used in computer hard drives, the magnets keep the cover securely in place until you need to access the brake’s inner workings. And on those occasions, you simply pop it off. 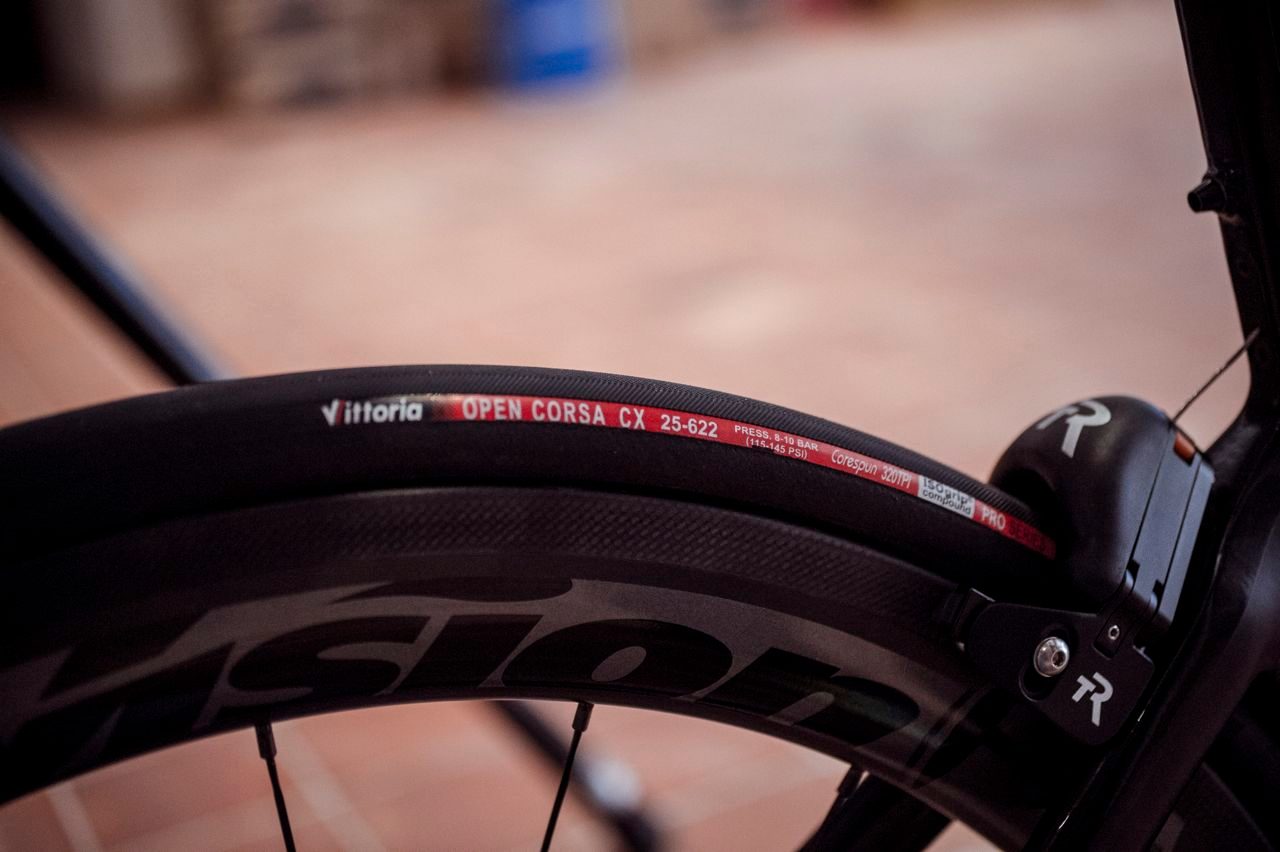 Better still, if you need to swap between narrow-bed training wheels and wide-bed race wheels, the Tri Rig allows you to without having to faff around so much with cable tension and brake pad spacing.

Thanks to its independent pad adjustment system, you can alter the gap between each side of the brake and the rim separately. Meaning you don’t have to readjust the brake cable tension and leave yourself with an unfamiliar brake feel ahead of your ride. 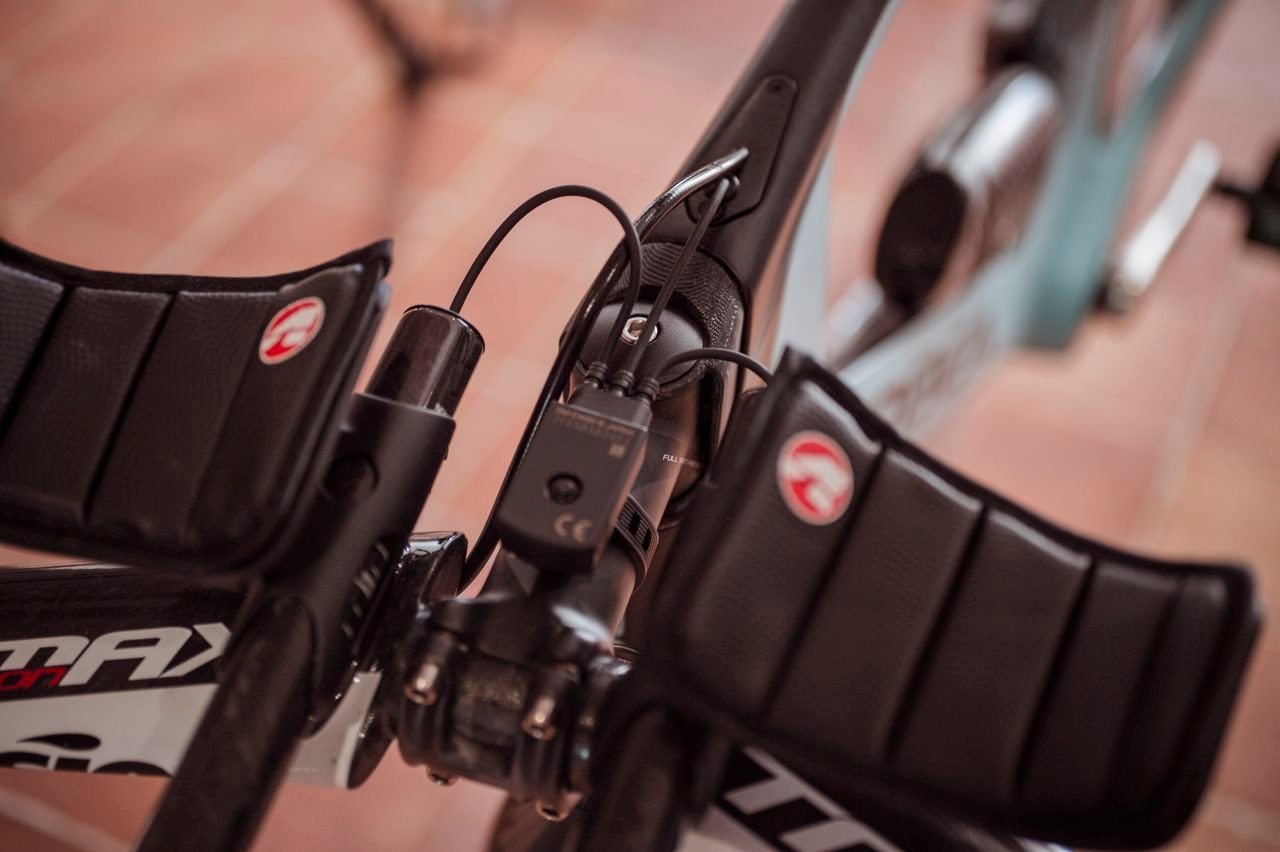 There’s no scrimping on quality with the Ordu, and it comes with Vision Trimax SI bars and full Dura-Ace Di2 as standard

But the brakes aren’t the only highlight. This being the top-of-the-range M10i model means there’s no scrimping on quality when it comes to any of the bolted-on bits. A full-carbon cockpit comes courtesy of Vision, who also supply the 55mm-deep Metron carbon wheels. The chainset and extra beefy BB386 bottom bracket are also from Vision, but Shimano take care of the rest of the drivetrain with their 11-speed Dura-Ace Di2 electronic groupset.

Orbea unveiled the new Ordu in Roth two days before the town hosted its annual triathlon extravaganza, giving the assembled media a chance to ride the bike on the roads around the German district, some of which would be used in the race. And although the smooth, rolling roads and deep-section wheels helped to show the Ordu in the best possible light, there’s no doubting the bike’s ability to fire you down any stretch of tarmac you point it at.

It’s a bike that not only encourages you to go fast, it also makes going fast feel easy. That’s partly down to how accommodating it is (with only a few minutes of minor adjustments courtesy of Orbea’s mechanic, the Ordu was sized-up, set up and ready to go) and partly down to the frame’s responsiveness. It’s a cliché to say a bike responds immediately to every press of the pedals but the Ordu really seems to. Its geometry and stiffness make for an exhilarating package. And not just on the straights, either. 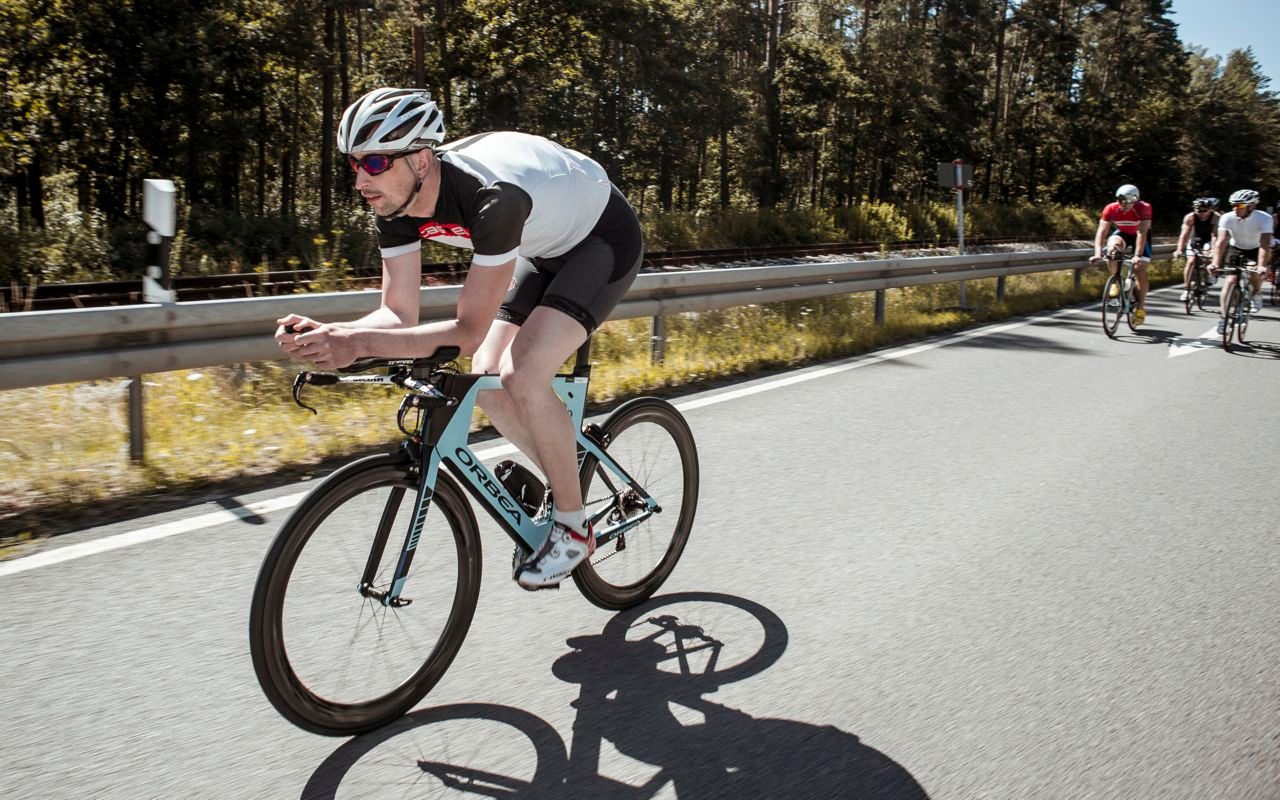 The sweeping bends of Roth’s country roads and its town-centre T-junctions were easily and precisely dealt with by the frame and the splayed-out Freeflow fork, without any of the wallowing or vagueness that plague so many triathlon bikes on the market.

The Tri Rig brakes also deserve credit for complementing the nimble handling. Pairing aero brakes with carbon wheels is usually a recipe for trouble (or at least a few hairy moments) but in this instance slowing and stopping came close to being the sort of no fuss affair you get with alloy rims and calipers. You still get the unsettling scrubbing sound as you drop anchor on the carbon rims but you don’t get the off-and-on grabbiness that is often common, just smooth and controlled stopping.

In the space of just three outings, the new Ordu had impressed enough to garner some seriously high praise from the press pack that’d been invited to Germany to take it for a test ride. Needless to say, we were seriously impressed ourselves!

And as for Andrew Starykowicz’s performance on race day? He set a new Challenge Roth bike record later that weekend, posting 4:09:13 for the 180km bike course. In the process he knocked more than two minutes off Andreas Raelert’s existing record of 4:11:43 set in 2011, despite it being Starykowicz’s first race back after having hip surgery. How’s that for a recommendation?