In 2012, US triathlete Andrew Starykowicz rode the fastest-ever Ironman bike split of 4:04:39. A year later, he lowered that mark to 4:02:17. That’s an incredible 44.58km/hr average over 180km. Starykowicz’s partner in crime was an Orbea Ordu OMR.

OMR is Orbea’s top-end monocoque carbon frame, featuring the ‘highest grade of carbon fibre for strength and compliance’. OME, as used on the M10, is a mix of that high end and a more affordable fibre/resin combo. That explains the mid-point £3,499 price tag.

“Unlike Starykowicz’s model, this bike’s not all about out-and-out speed,” says Damian Hackett, Orbea’s head of UK sales. “Yes, it’ll send you to T2 fast, but it’s designed to be used by age-groupers on a regular basis, so it’s robust, with standardised components that can be easily replaced.” You might think that’s a mask to conceal a lack of innovation but, with 13 bikes alone in Orbea’s triathlon range, there’s potentially a ride and advancement to suit your needs and budget. 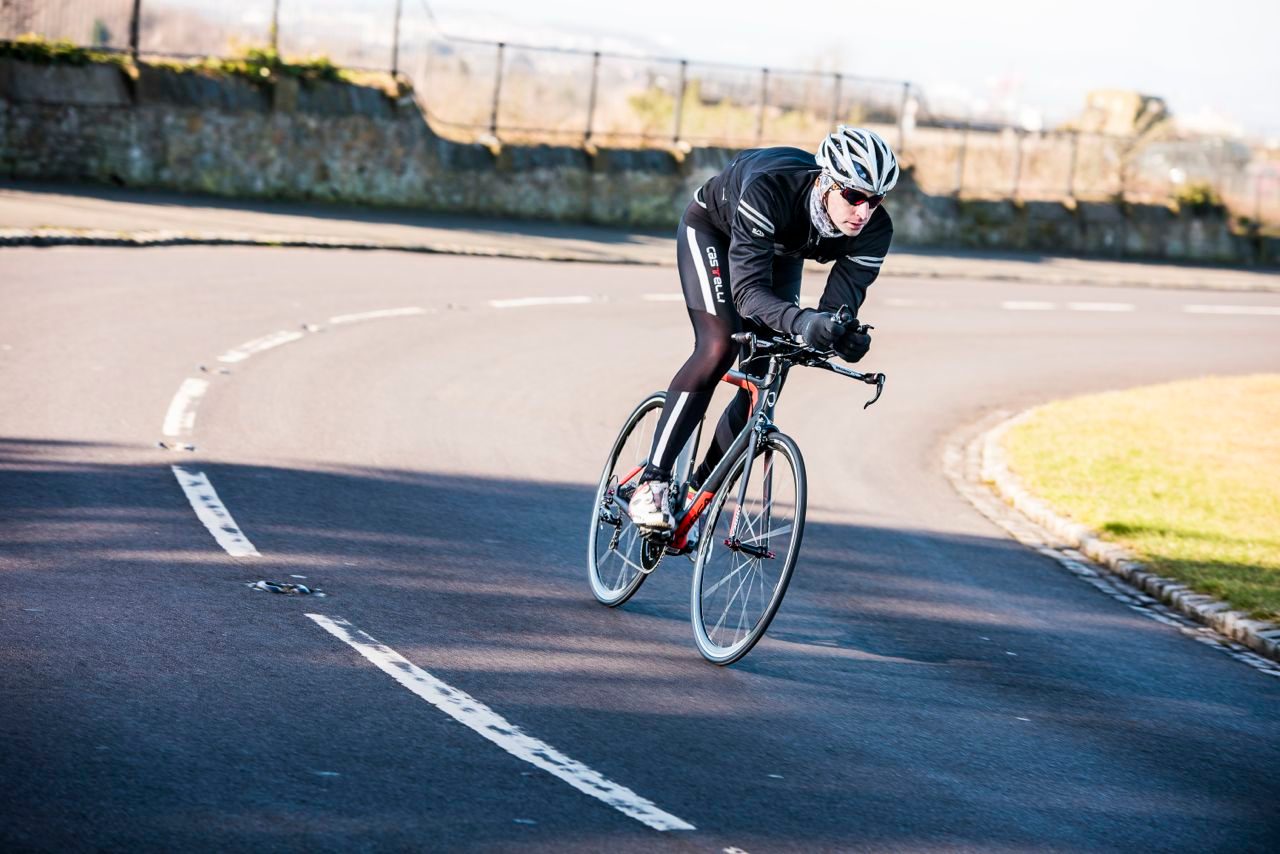 Like many bike manufacturers, while R&D and administrative duties happen at their company HQ in Spain, actual bike production’s in China. “But they’re our moulds, our designs, our testing, our carbon lay-up,” says Hackett. “We’re actually looking to expand another plant we have in Portugal and hopefully begin carbon production there.”

That’d be a seismic leap for such a big player in the global cycling market and could be a matter of when, not if. In China, wages are climbing and, in an economy that so relied on the global economy, now there’s an increasing focus on the domestic market. It means they’re not so eager for the euro or dollar. Watch this space.

Of course, way back when in the 19th century, Orbea designed and manufactured everything in Spain…

Orbea celebrates its 175th anniversary this year; the Basque manufacturer beginning life in 1840 as a rifle and gun producer. Many of its weapons fuelled the Spanish Civil War in 1936 but, by then, Orbea had leased the peace and focused its efforts on bicycle manufacture.

Orbea became synonymous with Basque brethren Euskaltel-Euskadi, before 2013 saw the professional cycling team become another victim of the economic crisis, a crisis that saw Spanish unemployment hit 25%. Now Orbea has usurped Look in providing a fleet of bikes for Pro Continental team Cofidis. 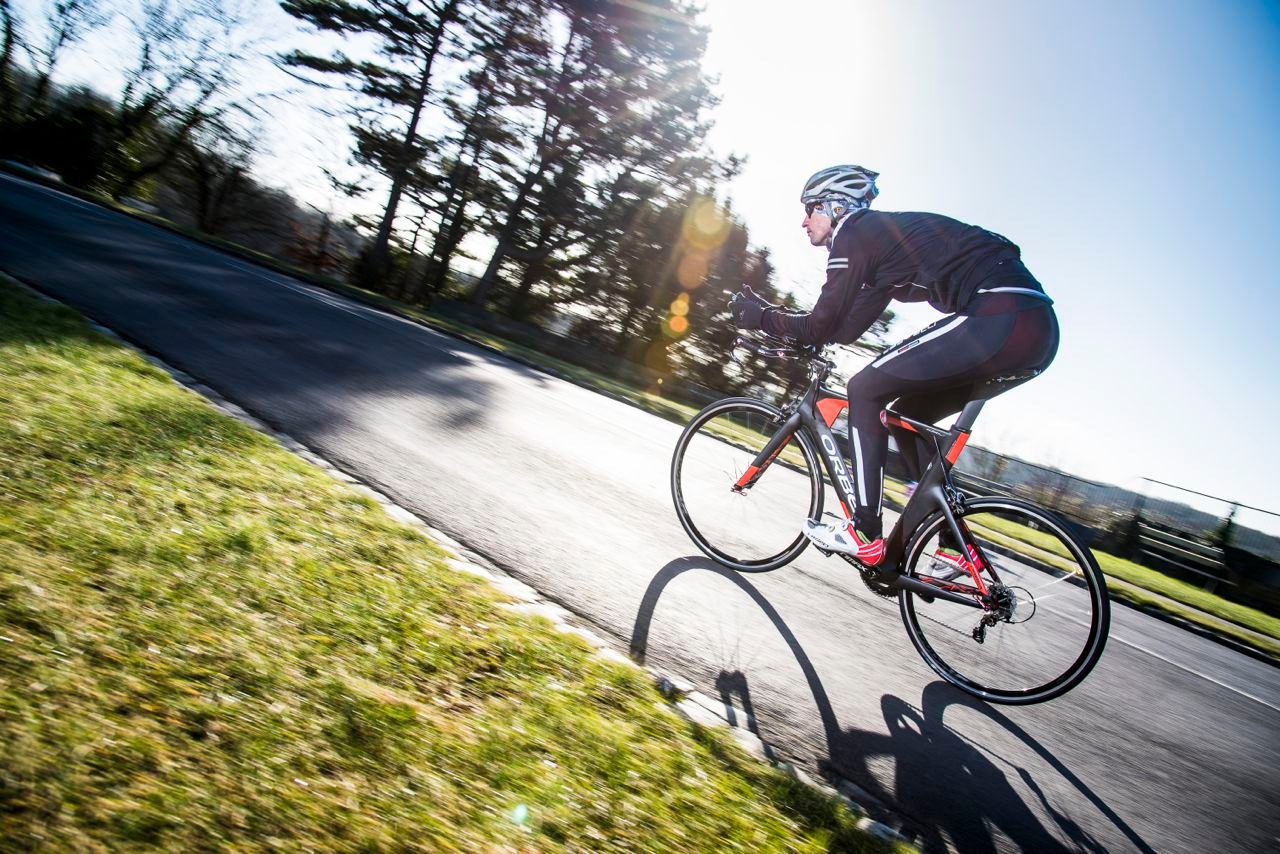 In triathlon, its most successful partnership – with Craig Alexander – also proved the most controversial, with the Australian securing his 2011 70.3 world title on an unbadged Cervélo P4 – while still contracted to Orbea. A couple of weeks later, he confirmed he’d split from Orbea after seven years, before shaving 13 minutes off his Kona bike PB aboard a Specialized Shiv en route to his third Ironman world title.

As PR exercises go, Orbea couldn’t have wished for a bigger blow. Mind you, whether it hit sales is debatable, with the Spanish outfit currently selling over 250,000 bikes each year.

Orbea’s ‘user-friendly’ ethos permeates the M10. The 78° seat angle for our medium is pretty standard triathlon fare, but it’s partnered with a 170mm crank. You’d usually expect a 172.5mm on a bike of this size, but Orbea has gone lower to open up the hip angle and so give your glutes and hamstrings an easier time over a 180km Iron bike leg, which should pay off come the run.

Standouts from a good-looking frame are the extra swathes of carbon placed between the triumvirate of top tube, head tube and down tube, and between top tube and seat tube. Both ends taper off, giving the impression that its benefits are aerodynamic. But looks can be deceiving. “The OME is more affordable than OMR, so you need a touch more material there for structural rigidity,” says Hackett. “That said, our wind-tunnel tests have shown that shape actually improves the efficiency of the bike at certain yaw angles.”

Princess-and-pea pedants might also notice the chainstays are a couple of millimetres longer than on previous incarnations. According to Hackett, that extra length’s down to two reasons. “One is to allow 25mm tyre clearance in the cut-out, but the primary reason is efficiency of shifting when using 11-speed.”

That’s imperceptible. What’s more noticeable is Orbea’s sizing guide. Like an increasing number of bike manufacturers, Orbea’s dispensed with traditional sizing based on seat tube length; instead, it uses the stack-and-reach method of fitting.

“Essentially, you can play around with different head tube, seatpost and top tube lengths to achieve a similar fit,” says bike-fitting expert and Ironman Rich James. “That’s not specific enough for your height. Stack and reach changes proportionally through the sizes, so should be a more accurate fit.” 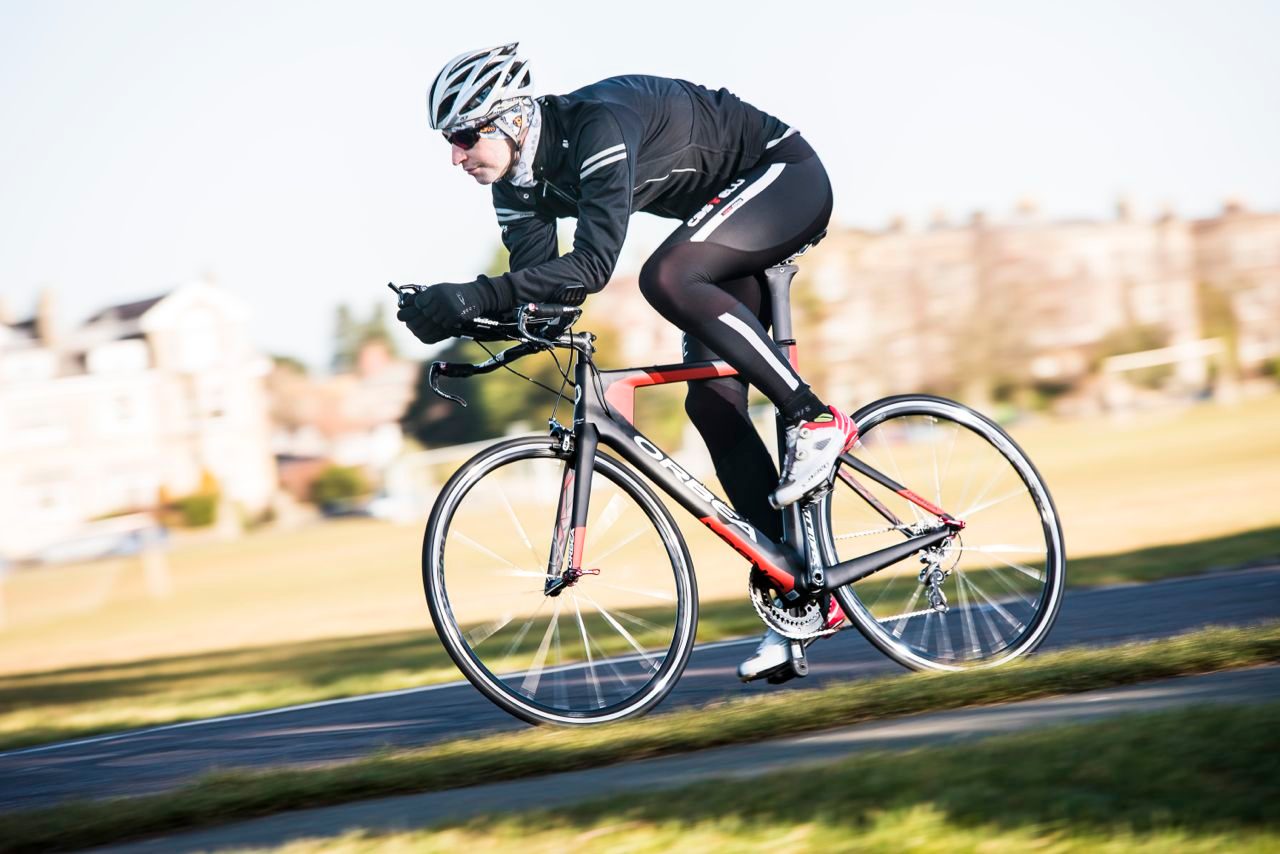 We continue our review of Orbea’s Ordu M10 tri bike by checking out how it rides… For our guide to the best tri bikes of 2014, head here.

Purists might argue that by catering for the TT crowd – the M10 is UCI-legal – Orbea has compromised. They have a case… until you ride it. Tri bikes are designed to cover up to 112 Iron miles; pure TTs might hit less than 10. The latter’s all about speed; the former – well, speed is great, but comfort’s of greater importance – especially as the run follows.

On a testing period that saw sheets of ice cover erratic pockmarked country roads, the M10 offered a confidence that was very much appreciated. On the flats it flew up to peak pace swiftly, the feeling of speed not dampened by the 30mm-deep Vision Trimax T30 clinchers. You’d want to upgrade these to something a touch deeper to really benefit from aero claims, as it feels a bit like a thoroughbred racing in slippers.

It’s a feeling compounded by the Challenge Forte Race tyres. There’s something incongruous about adopting an aero position on a curvaceous mould of carbon fibre and staring down to see a tyre with such an aggressive tread. It was welcome during the icy test period, but we’d replace with a slicker set come the races. 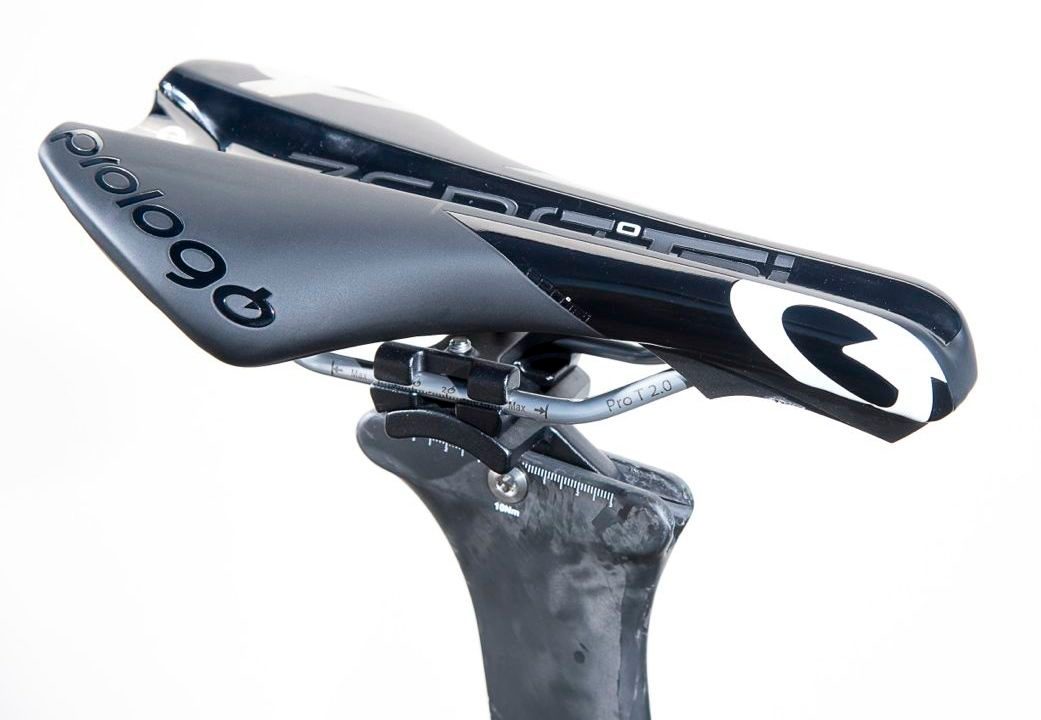 Hills are nonchalantly ticked off: descents are fast and stable, thanks to the proven Vision Trimax Carbon aerobars, while ascents had none of that cumbersome feel associated with some tri bikes. It’s also a comfortable beast, the geometry sending us into run shoes with pretty fresh legs and no undue fatigue. That’s despite the Prologo Zero Tri T2 saddle, which could do with a touch more cushioning on its nose and a strip of grip to prevent slippage.

The M10 features more bosses than a department store saturated with middle management. There are three on the down tube for either playing around with position or, when using the higher one, adding a second tube on the seat tube. There are also two more on the top tube for another feeding option. It’s a neat touch from Orbea and one that should be encouraged by more manufacturers. 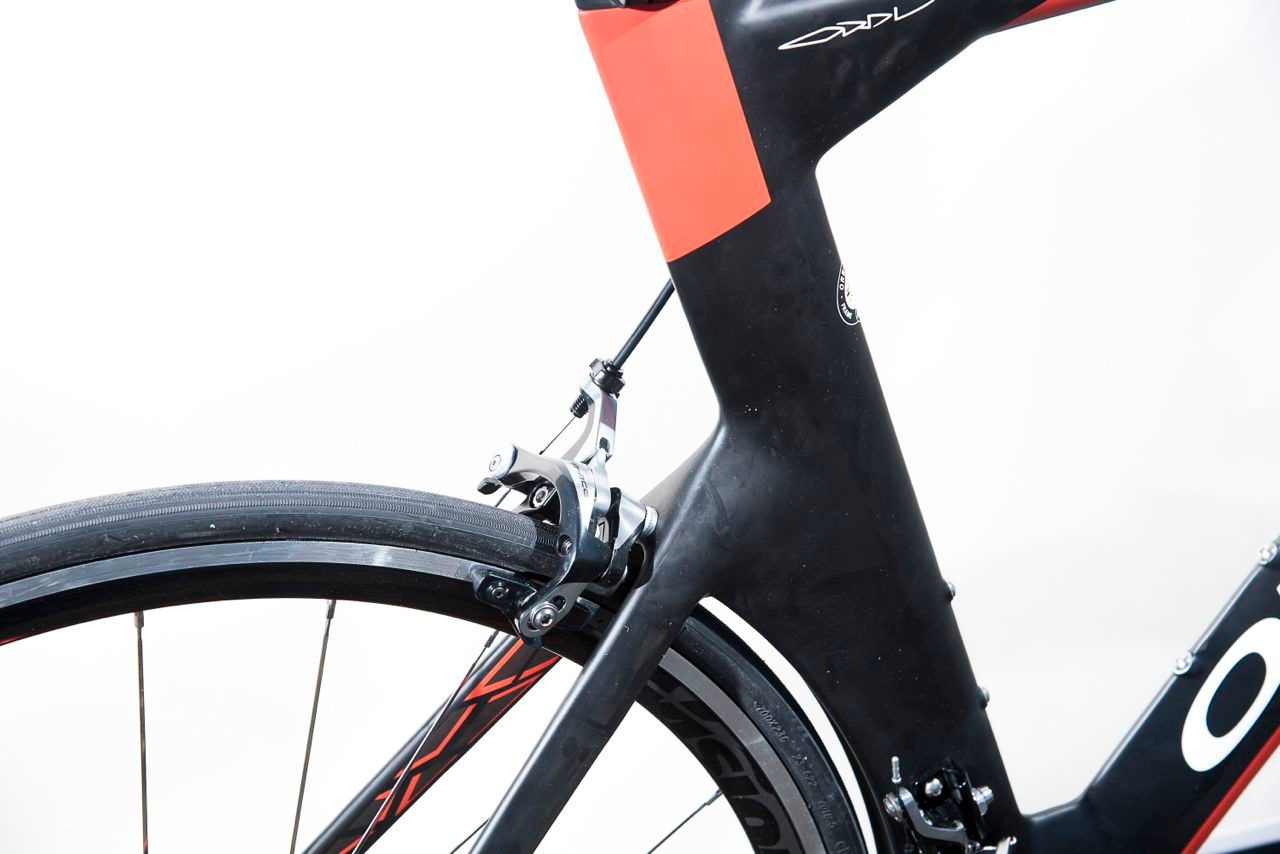 Dura-Ace 9000s are a reliable choice for braking duties, but may disappoint speedsters who prefer them slung below the bottom bracket

That usability extends to the brakes, which are traditional Dura-Ace affairs. For most age-groupers, practicality’s a godsend. Aero aficionados, however, might see this as a touch parochial, preferring rears tucked away behind the bottom bracket. The mechanical Dura-Ace takes care of shifting duties, doing so with confidence and accuracy, albeit it’s set up for Europeans (front brake activated with left lever), and it’s also compatible with electronic (if you win the Lottery).

All in all, the frame’s superb – Orbea is so confident, it features a lifetime warranty – but we’d question the spec. Those wheels and tyres roll with confidence, but don’t put the fire in your belly like better-quality deeper rims. “You can, of course, replace these with Vision Metron 55 clinchers,” says Hackett. They performed admirably on the 2015 Cannondale Slice that we tested back in the December issue, but they’d crank the price up to £5,079. 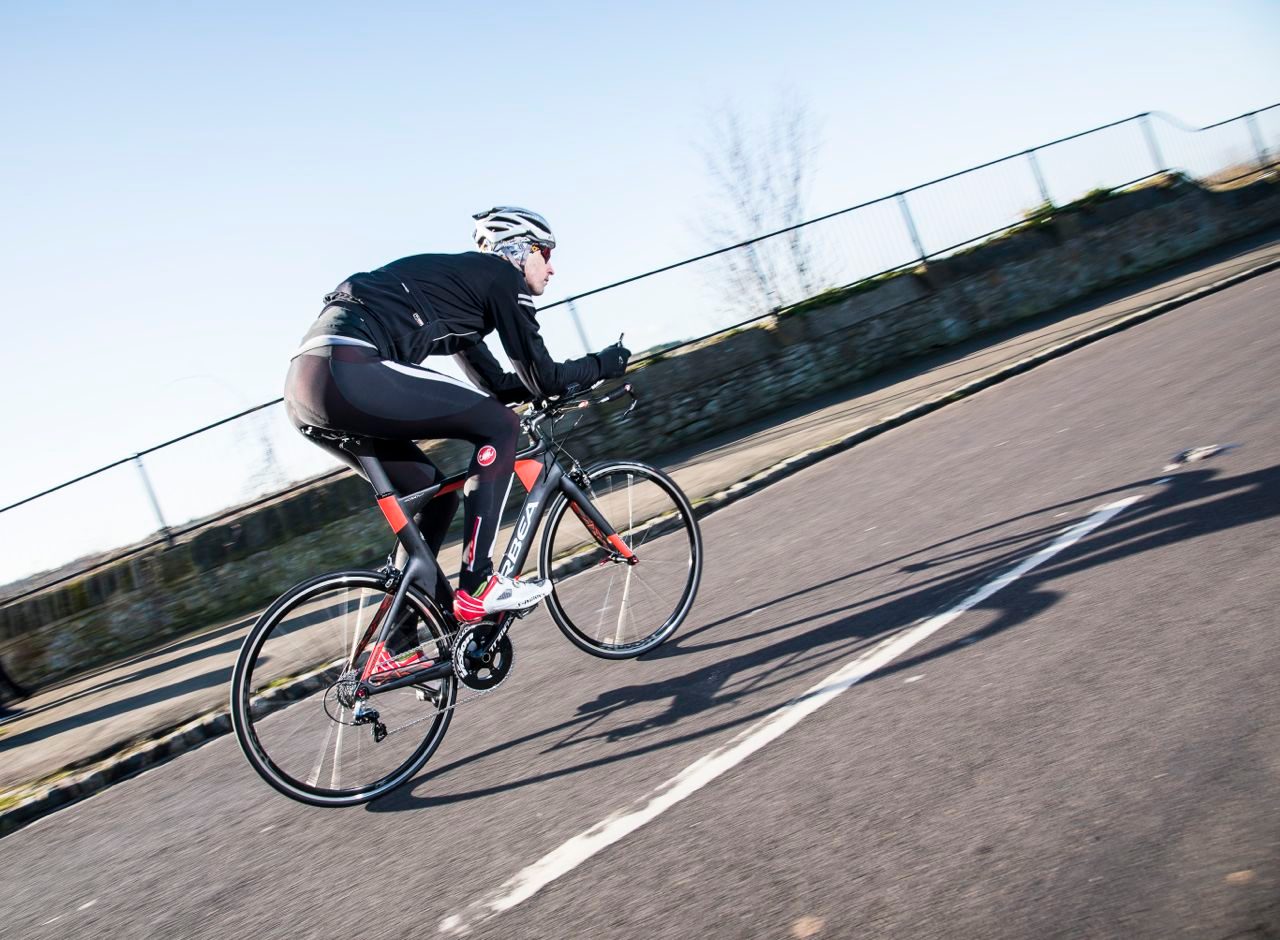 The same quality frame is seen on the M30, which retails for £1,699. Yes, you lose the carbon componentry in lieu of alloy replacements – and, unfortunately, still receive that Prologo saddle – but the Vision Team 25 clinchers will do a job for you, as would Shimano’s 105 groupset. We’d recommend plumping for the M30 and then, when budget and urge suits, upgrading with a spec of your choosing.

Overall verdict: Comfortable ride and impressive handling, though you’ll maximise your budget with the M30 and speccing up. And there are so many models in Orbea’s range, you’ll almost certainly find something you like – 80%