An Italian pro athlete once said to me: ‘Very, very important the skinny.’ He was talking about body composition but he could’ve been commenting on Look’s attitude to aerodynamics. The 796’s head tube is a mere 25mm across. Incredibly, the down tube and seat tube are equally narrow, so it’s certainly deserving of its moniker – Monoblade.

Look claims that the 796 is the most adjustable bike on sale. And we’re not going to argue. The two seatpost caps can be mounted either way around, giving a huge range of effective seat tube angles from 73-81º. There are two lengths of flush, flat stem and the base bar can be flipped to give a 25mm rise or drop. Together with 30mm of spacers and the 60mm bridge, the pads can be mounted as much as 115mm above the stem height. The extensions are offered in straight or S-bend shapes and can be mounted above or below the base bar, and there’s an optional kit to angle the extensions at 8º if you want your hands higher.

That’s not all, the carbon fibre masterpiece that’s the Zed 3 crankset has a ‘Tri-lobe’ adjuster offering three effective crank lengths in one for a total range of 155-175mm, allowing you to weigh up cycling power against better legs for the run. The crankset can take both 130 and 110 BCD chainrings, so you can swap for hilly courses, but its vast axle size means you can’t replace it with a power meter crankset. The arms are also too thick to take Garmin Vector 2 power pedals, so you’re limited to not-quite-there-yet PowerTap P1s, the untested new Look Power pedals, or a PowerTap hub.

Unlike the new Canyon Speedmax the 796 doesn’t come with integrated storage. Instead, there’s one set of bosses on the seat tube and a single bolt on the top tube. Look suggests two saddle-mount bottles, an aero bottle on the seat tube, a bottle slung between the extensions and a bento box bolted to the top tube.

In the UK, the 796 is only sold as a frame module, but this test bike came direct from France, where it’s offered complete as tested, with Shimano Ultegra Di2, Mavic CXR 80 tubular carbon aero wheels and an excellent Fizik Tritone saddle.

The biggest surprise is that the 796 is really stiff under power and precise in the corners. The Zed 3 crank is beefy, but you’d think a down tube this shape would fold like paper. Not a bit of it. The 796 climbs keenly and holds a line well on fast descents, the fork and cockpit a match for the frame. The hidden front brake is strong, too.

On 23mm tubs and with so much rigidity built into such thin airfoil shapes, it isn’t surprising that the 796 is typically aero bike firm, transmitting the road surface’s belligerence verbatim rather than diplomatically toning it down. The arm pads are a bit thin, too; for rides over an hour I’d change them for aftermarket gel pads. The pay-off, especially on these wheels, is speed. The Look feels fast when conditions suit it. The 796 impresses, then, as well it should when the frame kit is £4,759. This build would be well over £8k, so the one thing that definitely can’t be skinny is your wallet. 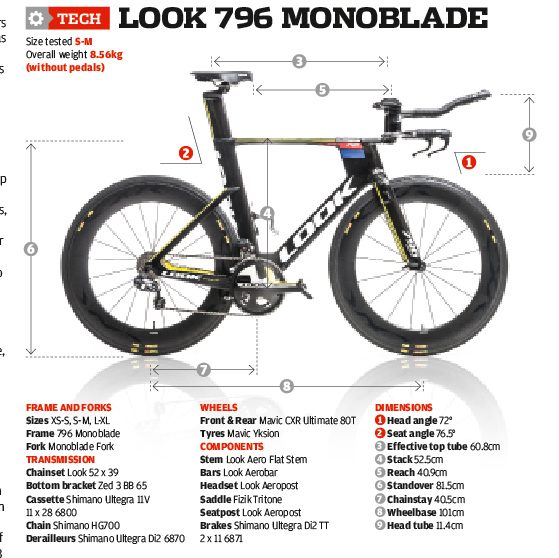