Tradition and convention abound in the bike world. But Factor have dumped the rulebook and come up with something they believe is a bit special. Nik Cook got up close and personal with the Vis Vires…

In 2007, Norfolk-based motor sports company bf1 systems decided to embark upon a flagship project that would demonstrate their expertise in all aspects of performance engineering and design. A prototype car was simply too expensive, so they turned their considerable engineering brains to rethinking two wheels instead.

“A few of the guys in the office were cyclists and we thought that there was a lot of dogma in cycling design, and that traditional brands are almost hamstrung by history,” says Stuart Brierly, Factor project engineer. “So by starting from scratch and not having those restrictions, we’d have the freedom to design something special.”

And it certainly was special, as in 2009 this led to the launch of the Factor 001 which incorporated advanced electronics – with over 100 channels of biometric data – full hydraulic disc brakes, integrated LEDs and a lithium polymer battery system supplying power to the on-board computer, sensors and Shimano Di2 shifting system simultaneously. It certainly fulfilled the original groundbreaking and attention-grabbing brief. Our own Andy Blow rode and reviewed that super bike back in the distant days of issue 250 and, impressed by the passion and design that had gone into that bike and how it performed on the road, left bf1 intrigued and excited about future Factor developments.

The Factor 001 was further refined, modified and effectively became the extremely limited-edition £25,000 Aston Martin One-77. But it was the intervention of American bike designer Steve Domahidy that led, if not quite to a bike for the masses, at least to a bike with wider market appeal.

Domahidy was one of the founders of Niner bikes; the company who pioneered 29-inch wheeled mountain bike design well before it became accepted. Having been impressed by their work on the 001, he approached the head of bf1 systems, John Bailey, and became involved in the project.

“The design philosophy for the Vis Vires was to take what had been learned from the original Factor 001 and apply it to a production level frame, while making improvements on weight and retaining the same philosophy that drove the original concept bike: integration and on-board electronics,” Domahidy explains. “For the production bike, we had to make it accessible and concentrate on ride quality and geometry. There were reasons for every decision we made about shape, integration, spec and all of the tiny little details that went into making the Vis Vires.”

It’s a wonderful story and, speaking to all the members of the team involved in the project, the passion, R&D hours and attention to detail that have gone into this bike is staggering. But there’s no escaping the fact that almost £10,000 is still a hell of a lot for a bike. Especially if you consider what that money could buy from an established manufacturer. Yes, you get a Sci-Con bike bag worth £400, a Garmin 810 worth £380 and a crank-based power meter to sweeten the deal.But the crunch question is, if we had that cash, would it be top of our shopping list?

So, before we get the 220 chequebook out, let’s delve a bit more into the tech and then, most importantly, see what it does on the road. 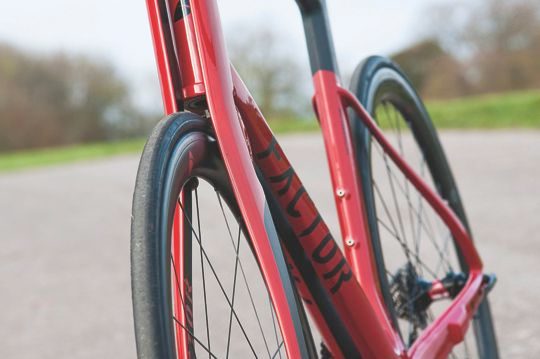 There are two features of the frame design that really stand out. The first, a legacy from the 001, is the dual-bladed fork design. This essentially relocates the crown of the fork from where it traditionally is – where the fork passes through the head tube – and places it at the stem, removing axial loads from the steering of the bike. This should improve steering accuracy and responsiveness but could also make the bike twitchy.

The second is the dual down tube. Factor point to stiffness being a major benefit of this design, and it certainly has a sturdy looking bottom bracket area. But it’s mostly aero thinking that’s behind it, so that turbulent wash from the front wheel can pass through the down tube rather than having to go around.

According to Factor’s tunnel testing the Vires outperforms many of the current top aero road bikes and, although slipperiness wasn’t a priority for the 001, this bike has the hallmarks of a true wind cheater. Fortunately, although the bulk of the frame screams performance, some fairly skinny stays suggest that rider comfort has been considered and hopefully it won’t suffer from the harshness of its predecessor.

The Factor-branded, 45mm carbon clincher wheels are from new company Black Inc. They certainly look the part, have more than a hint of Enve to them and you can never fault DT Swiss hubs. 45mm is a sensible rim depth and Factor claim that, aerodynamically, they pair extremely well with the frame while being compliant enough that they don’t make an already extremely stiff bike unrideable. The handlebars are from Enve while the Fizik Arione 00 saddle sits atop a wonderfully aero-looking seatpost with a very neat integrated clamp. 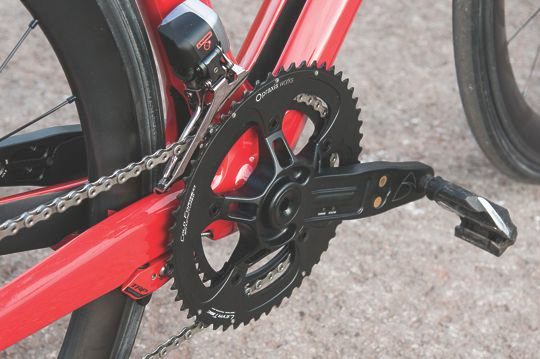 The cranks are Factor’s own Power Measurement, with strain gauges in each crank arm for legitimate (not calculated) left/right pedal stroke analysis. They’re also able to measure force at any position of the pedal stroke. With strain gauges and their applications being the bread and butter of the company, Factor’s mechanical design manager Simon Roberts saw it as a no-brainer to make their own. The data from the gauges is transmitted by ANT+ to the Garmin 810 sat on the integrated mount, but in 2014 Factor will unveil their own head unit. 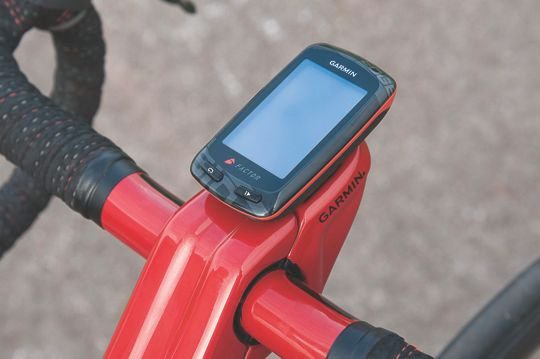 Braking sees a departure from the disc brakes of the 001, which the team at Factor admit they were never really happy with. They also point out that the design process for the Vires began before there were viable commercial options. Yet the TRP TTV carbon mini V brakes are beautifully hidden from the wind and, on other bikes that we’ve ridden, have been brilliant stoppers.

You almost have to take it as a given that a bike like this will have a top-of-the-range groupset. And Shimano’s Dura-Ace Di2 is superb: the battery is fully internally housed so as not to detract from the sleekness or add unnecessary grams of drag.

High tech can sometimes mean high maintenance, but getting up and rolling on the Vis Vires is quick and simple. A quick touch on the power cranks with the supplied dongle wakes them from a ‘deep sleep’ mode, a power saving feature that kicks in after 48hrs of inactivity. Syncing with the Garmin 810 is then seamless, so all you have to do is calibrate them and you’re ready to go.

The bike’s geometry is aggressive but not ridiculous, and you immediately feel that you’re comfortable, powerful but still fairly aerodynamic. Rolling off slowly, you have to be aware of the limited steering caused by the design of the stem and top tube interface. It’ll stop your bars spinning round and smashing into the top tube, which could be a very expensive accident, but could lead to an embarrassing low speed tumble. You’re not going to be riding this bike slowly though and, once you wind it up to speed, it’s stunning. Yes, it’s super stiff, responds to accelerations extremely well, powers through the wind and climbs like a mountain goat on amphetamines, but it’s the accuracy, responsiveness and precision of the handling that’s jaw dropping. 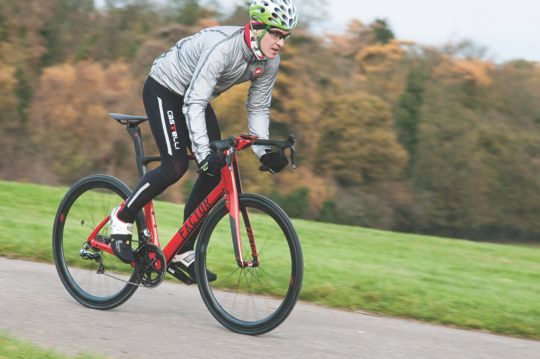 Forget doubts about twitchiness. Once you’re dialled into how sharp it is, the lightness of touch it requires round corners is simply sublime. It makes descending an adrenaline-charged joy and, if you could sneak its non-UCI compliance past the commissaries, in the right hands it’d be near unbeatable in a technical crit. As an illustration, we’re currently spending most of our riding time either grinding out the road miles on our old faithful winter trainer or hurtling round the boards of Manchester Velodrome on a super stiff carbon track bike.

On a scale, we reckon that if a bog-standard road bike was at the bottom and a track bike is the top, the handling, stiffness and responsiveness of the Vires would almost put it up there with the best on the track.

What’s really amazing is that, given its race readiness, it’s not harsh or uncomfortable. Testament to this was that on 5hr rides on rough Peak District roads, it didn’t leave us feeling at all beaten up. You could still be confident that, when you really need that race ability, it won’t let you down.

It does it all but find some sinuous bends and you’ll find handling nirvana.

No compromises made and we can’t find a weak link.

Considering the R&D and the additional extras, suddenly £10,000 doesn’t seem at all bad.

It’s a race-ready machine that you could ride all day.