In May’s 220 we tested Dolan’s L’Étape that, while lending a nod to the sportive market, had enough about it to appease racing triathletes, especially as it was stunning value for money.

With the Scala, its TT intentions mean it’s all about the racing, yet comfort’s surprisingly impressive for such a slick performer.

The Scala replaced the Stryke as Dolan’s TT/triathlon offering in the middle of 2013. Dolan toyed with the idea of aligning the stem with the top tube – along the lines of Storck’s Aero 2 – but decided not to, as it restricts the height of the stack. It was a clear signal this this is a tri bike for all levels of triathlete. 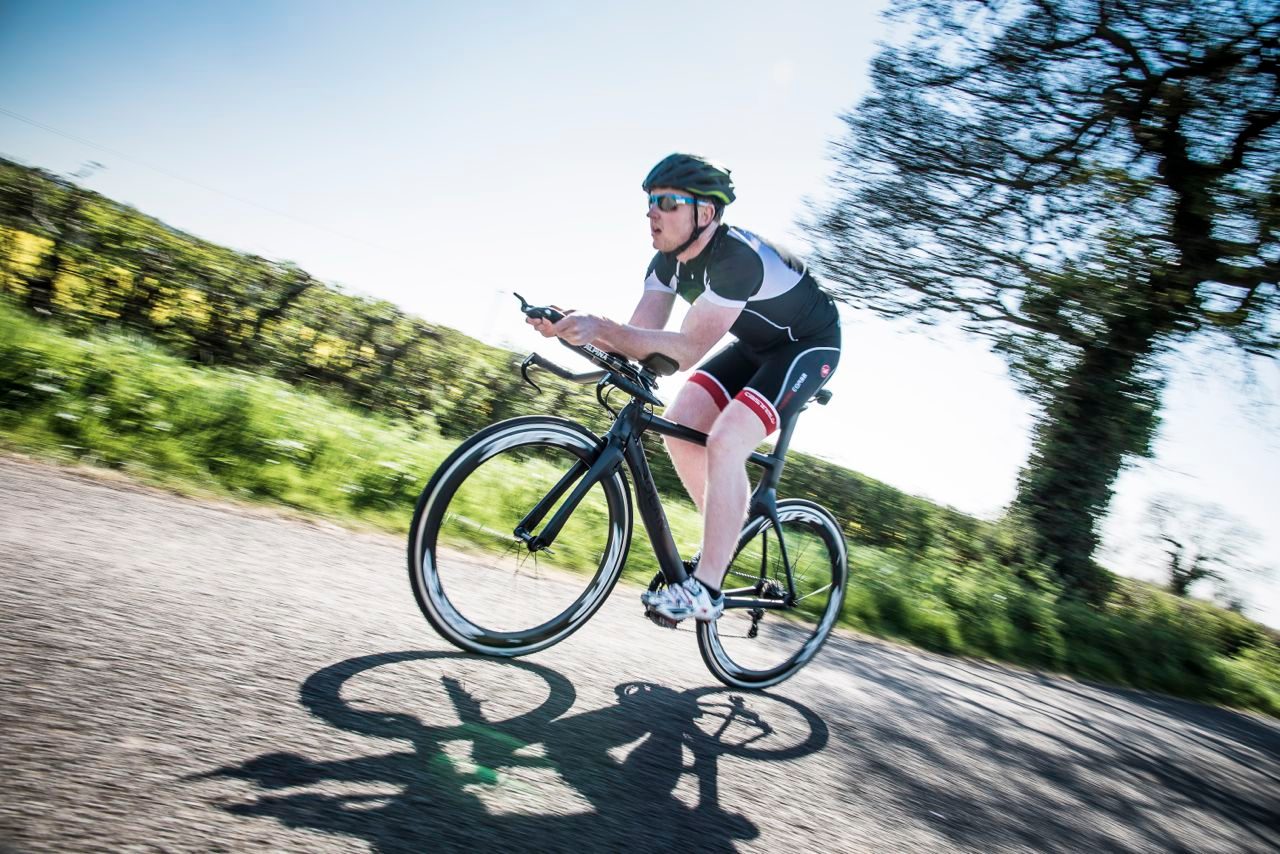 That versatility encompasses component choice, too, with Dolan’s online bike builder (the brand sell direct only) offering an array of options depending on whether you’re seeking comfort or aggression. That’s clearly highlighted by the menu of 16 stems, which come in different lengths, materials (alloy vs carbon) and manufacturers (Deda, as featured on test model, and Pro Vibe).

Back to the Scala frameset, it’s manufactured in the Far East and constructed of Mitsubishi MR70 carbon fibre. Feeling the difference between the various fibre types offered by the world’s biggest carbon manufacturers, like Toray and Mitsubishi, is finer than a carbon filament, so we asked Stephen Dolan of Dolan Bikes to give us the lowdown.

“MR70 is 20% stronger than the conventional Mitsubishi fibre, the MR60,” he says. “In tech terms, that equates to a strength of 7GPa and a modulus of 325GPa. This was achieved by a refinement of the manufacturing process.” Despite the expanding field of wearable technologies, we’re not aware of a bike tool that could detect if the modulus (stiffness) was 324GPa or 325GPa (!). 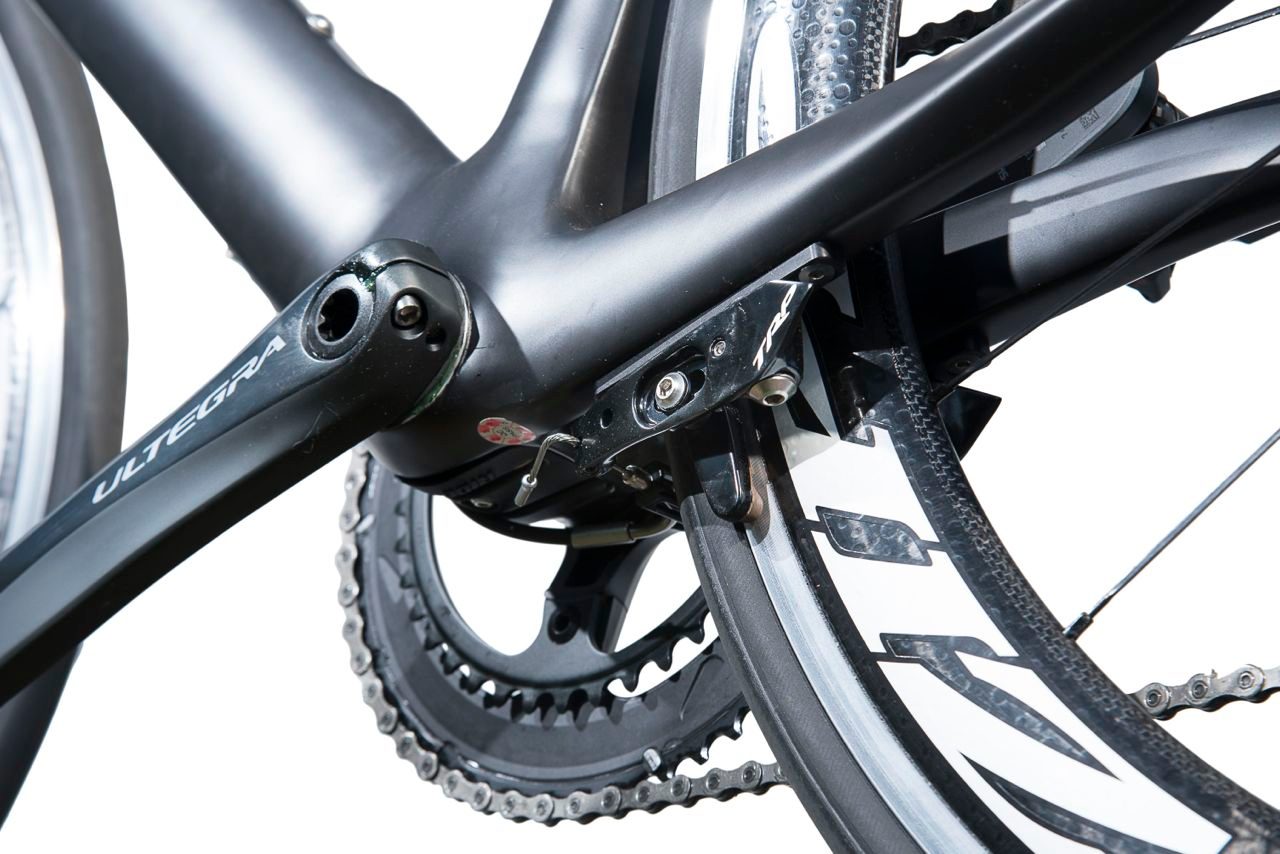 Like the front brakes, the bottom bracket-mounted TRP brakes are positioned to improve overall aerodynamics

What we did notice is that this is one stiff and light frame, the bulbous bottom bracket ensuring your rotational effort’s efficiently transferred into forward propulsion. And that’s from the off, as the Scala cranks up to speed confidently and swiftly (just make sure you’re in a low gear exiting T1 before shifting through the options). That stiffness doesn’t come at the cost of comfort, though, as even 3hr-plus rides resulted in joints and muscles that were relatively fresh, which isn’t always the case with triathlon bikes.

That comfort also derives from the ISM Adamo time-trial saddle. ISM’s standard noseless design relieves perineum stress, while the rear padding is firm but comfy. The Adamo also steers you into a nice aero position thanks to the softly sloping front arms, which has your arms nestling onto the Alpina aerobars…

Alpina’s an Italian brand that haven’t featured a huge amount in 220, but they have a good pedigree, their Wing TT Aero Carbon Seatpillar version once used by British Cycling. The Alpina bars on test featured carbon base and extensions, were comfortable, and ensured solid and responsive handling. 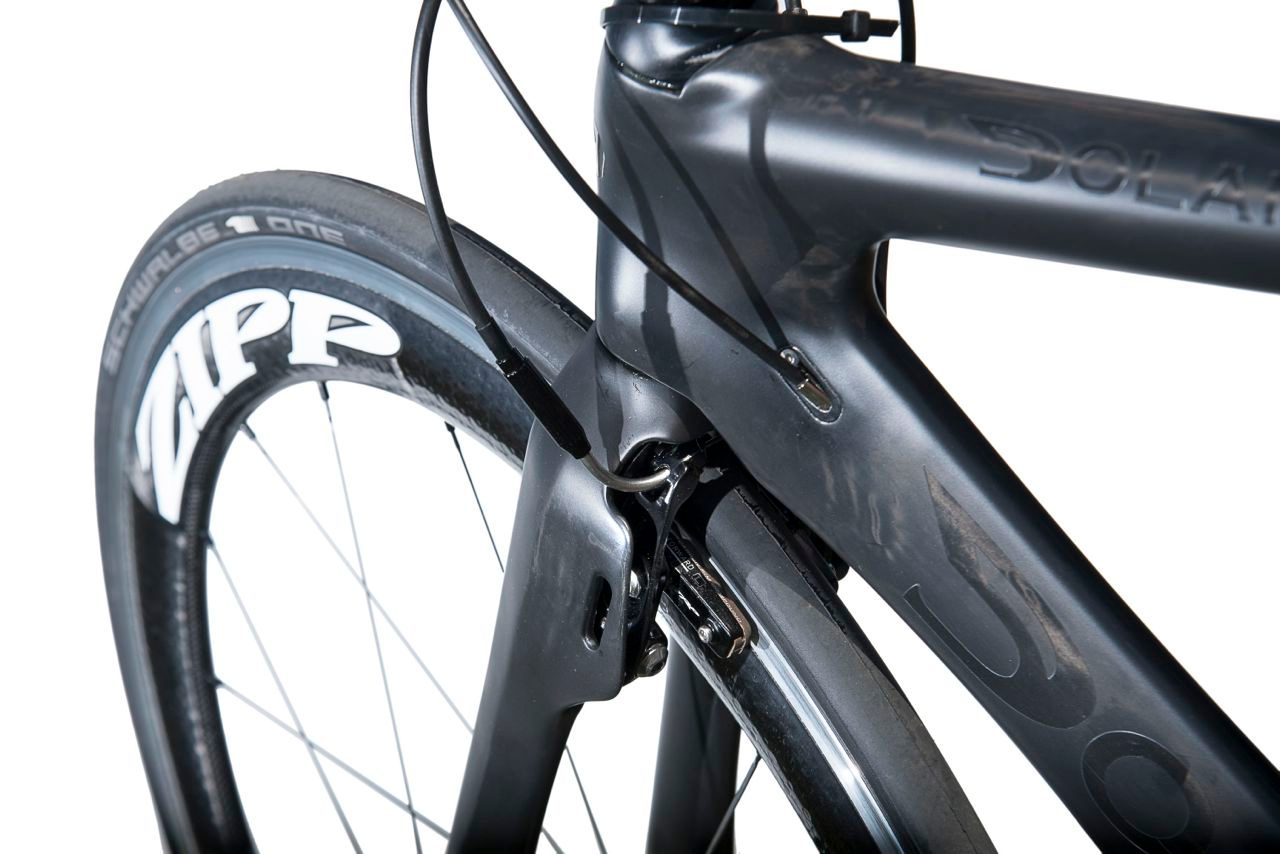 Bar-end shifters and SRAM alloy brake levers initiate stopping duties, which are finished off by TRP brakes. These are neatly placed behind the front fork, which tapers and extends near the headset, and the bottom bracket, leading to nominal but appreciated drag savings. Internal cable routing lends a extra nod to aerodynamics and improves the aesthetic appeal.

Zipp take care of wheel duties with the 60 clinchers. The dimpled, slightly bulbous rim shape’s typically Zipp and the US outfit has a library’s worth of wind-tunnel data suggesting they’re damn fast. 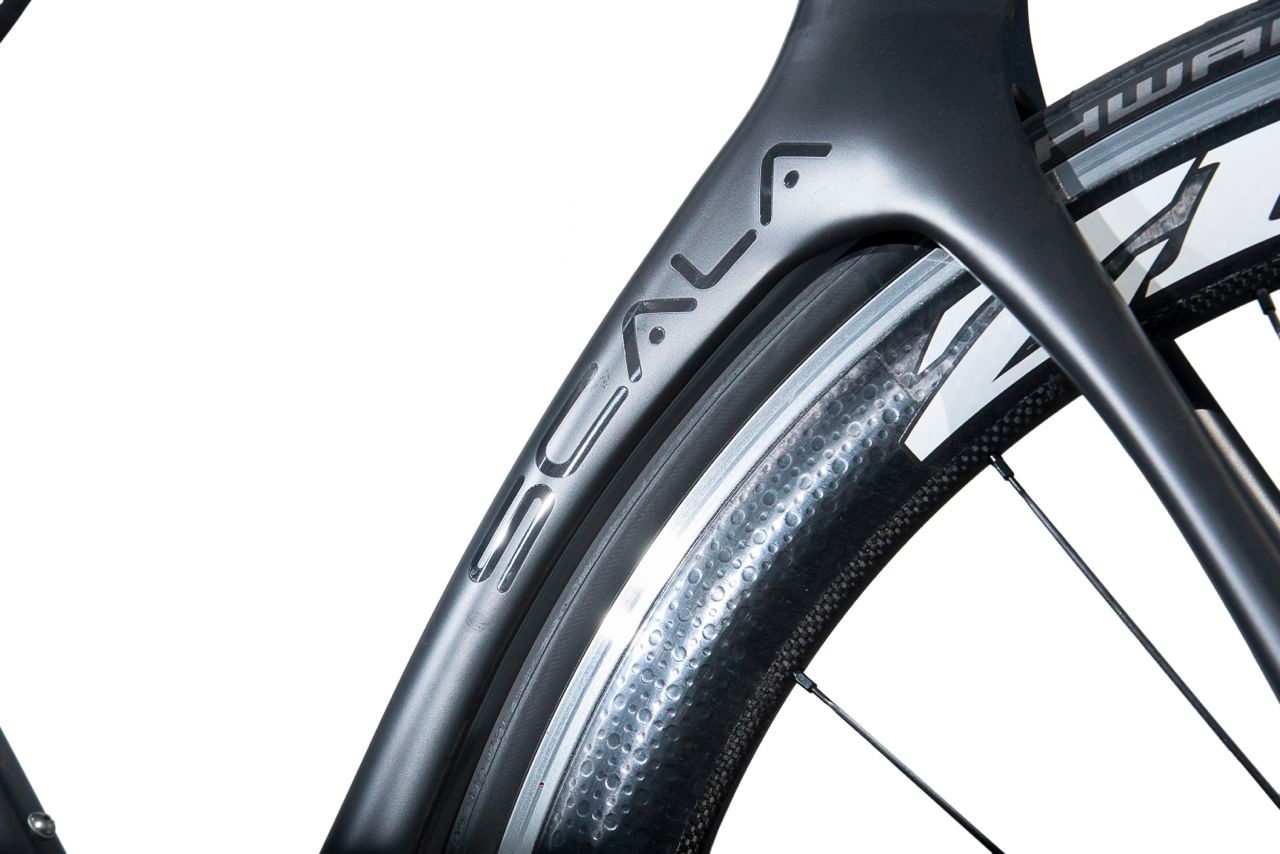 That’s reflected out on UK roads, though you might want to swap for something less aero on hillier courses or when sidewinds are a problem. Once again, though, clincher over tubular highlights its mass appeal.

Shifting duties are taken care of by the ever-dependable Shimano Ultegra groupset. Yes, we’d like to have seen Ultegra throughout – brake levers and brakes, too – but there has to be some compromise when looking to hit the sub-£2,000 mark.

That mix-and-match doesn’t affect performance, though, which is superb. In fact, the only minor moot point is the plastic cover around the base of the seat tube. It adds to the streamline effect, covers the bolts, but started to lift up slightly at the front during our test period. Finally, some housekeeping. It’s UCI legal, the frameset comes with a three-year warranty as standard and also comes in three new colour options. 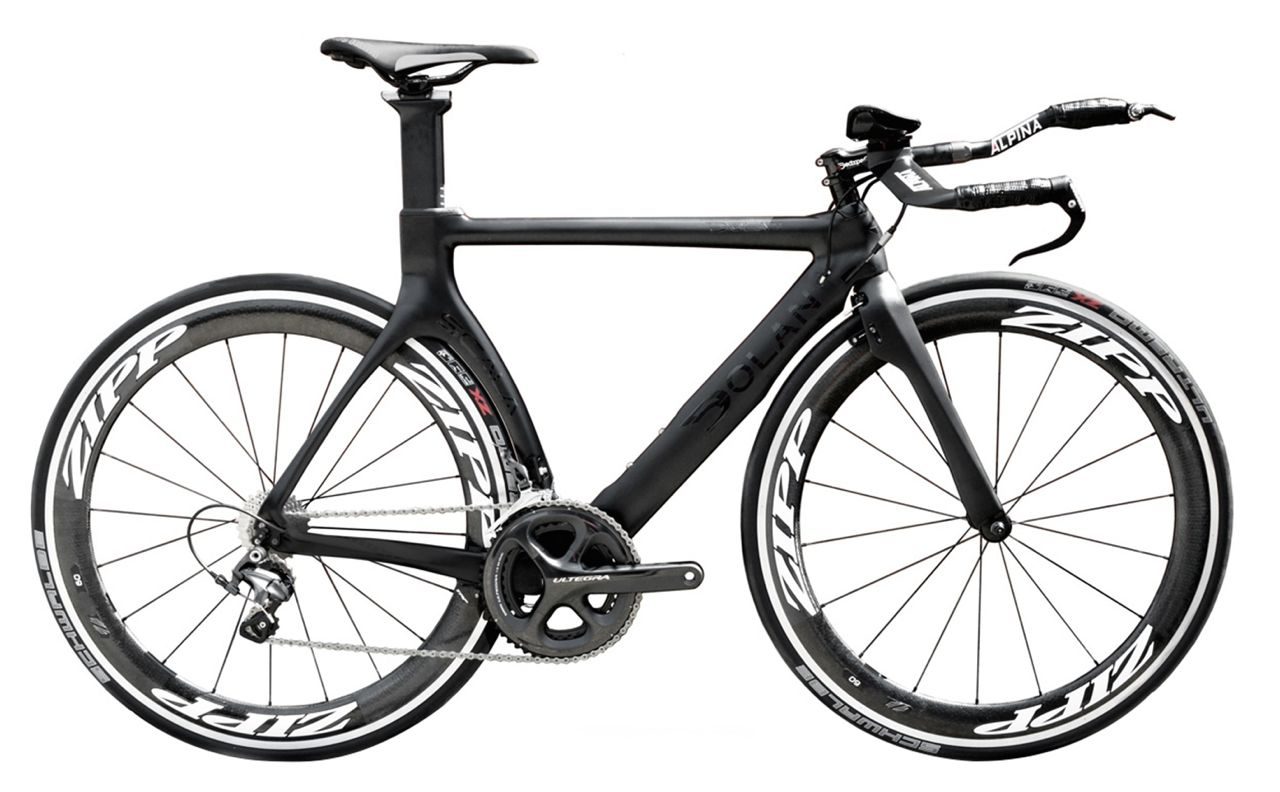 Dolan claim this is their most aerodynamic bike ever. We can only verify where it matters – on the road – but were impressed with its speed, comfort and looks. The bike-builder option is another string to Dolan’s bow, but the cherry on the cake is the price. Producing a bike of this quality for £2,000 is simply astounding.

Verdict: Fast, comfortable and neat touches that complement the aerodynamic appeal of the frame make this one impressive TT/tri bike. And the price? Brilliant. 89%