Cervélo shook the cycling and tri world to its core back in 2016 with the launch of the P5X, which tore up the UCI rule book by reinventing the beam bike design of the late 1980s/early ’90s and bringing it bang up to date.

If you bought one for the £13,499 asking price in its top spec it will also have torn into your bank balance, and this is one of the issues its successor, the P3X, aims to address. Admittedly it’s still over £7,000 with training wheels, but a cost saving this significant for arguably a better bike than its predecessor represents something of a breakthrough. It’s a chance for Cervélo to offer technology that was only available to pros and the super-rich to a slightly wider audience.

So how have Cervélo brought the cost down, and how is it better? First, a new and lighter carbon lay-up for the frame is now manufactured in Asia and, although Cervélo admit that it performs slightly slower in the wind tunnel compared to the P5X, you’re looking at a weight saving of half a kilogramme for a full build and a frame that’s 254g lighter.

The other weight savings are found in the ‘speed riser’ adjustment system, seatpost and the top tube storage pouch. While we now know a lighter bike doesn’t mean faster, it’ll be less of a drag on inclines and psychologically feels less clunky to ride whatever the gradient. For well-conditioned triathletes, the trimmed weight may save more time on hilly courses than the minor watt savings of the heavier P5X on flats.

To ride, the P3X feels remarkably normal despite the missing seat tube. It swallows up bumps thanks to the huge bottom bracket area, and Shimano’s hydraulic disc brakes provide world-class stopping power. We raced it at the Windsor Triathlon over our own tri bike, finding it adept for tackling the twisty, rolling course. Having ridden both the P5X and P3X, we noticed the better climbing ability of the latter, and found it was sharp and direct through corners – almost handling like an aero road bike apart from the lower position you’re in on the base bars.

A seat angle of 77° through to 81° can be obtained by altering the saddle fore-aft, but when it comes to adjustment the party piece is the Speed Riser. This simply works like a seatpost except it raises or lowers your extensions, an ingenious yet simple innovation. The tilt of the extensions can be adjusted from 0 to 15°, and Cervélo’s pads provide a comfortable forearm perch.

The easily-detachable speedbox under the down tube can house tubes, tyre levers and a Co2 canister, while the ‘Speedcase’ between the down tube and rear tyre can hold additional flat kit and food with a bottle mount on top. The top tube pouch can store plenty of nutrition, and sits flush with the cockpit for optimal aerodynamics.

THE PINNACLE OF DESIGN

We were underwhelmed with the DT Swiss alloy wheels and Continental’s Grand Prix SL tyres, so added cost is needed to make it fully race ready. Elsewhere, though, you’re getting a mix of Shimano’s best two component families for the electronic groupset and brakes (apart from a 105-level cassette, oddly), which will only need changing if you push big gears and require more at the top than the 52/36 chainrings that come as standard.

Will we see more trickled-down PX tech in the future? We hope so, because the frame design is one of the fastest out there in independent testing, and we wish more triathletes were able to get a slice of it. If you do splash out, don’t expect to be disappointed. For us, the P3X represents the pinnacle of tri bike design.

Verdict: The P3X has taken everything that was good about the P5X and modernised it further. If you gave us a blank cheque then this is the bike we’d be buying along with some deep-section wheels to make it ready to race even faster. It looks like it’s from outer space, but has an amazingly ‘normal’ ride quality that’ll net you a rapid bike split.. 91% 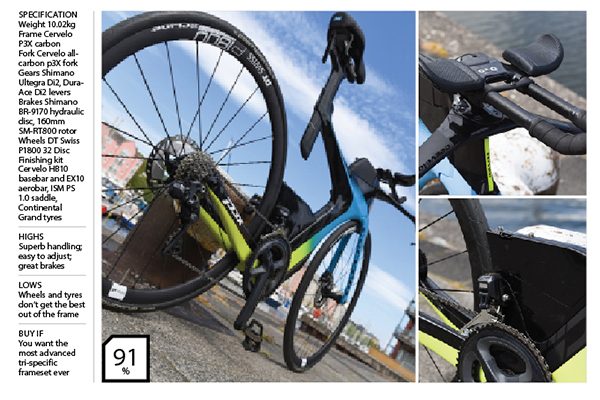 When should I upgrade to a tri bike?