When Boardman Bikes launched their 2014 Elite range, the vast majority of attention and interest was focused on the super-stealthy looking AiR/TTE.

With not a single bolt or cable visible to the wind, an aerodynamically optimised Boardman-developed integrated cockpit system and a cutting-edge frame, it’s not surprising that it overshadowed its siblings in the Boardman range. However, at nearly £9,000 for a complete Dura-Ace Di2 build with Zipp Firecrest wheels and £3,499.99 for the frameset and cockpit, it’s just not a realistic option for the majority of the age-group masses.

For the same price as the AiR/TTE frameset, the AiRTT/9.4 Di2 is a complete bike that, although far from entry level, certainly comes in at a more affordable price tag. It’s no slouch either and has a proven race pedigree at the highest level in triathlon. But Boardman haven’t rested on their laurels. They took the AiRTT frameset, which propelled Pete Jacobs to the 4:35:15 bike split and laid the foundations for his 2012 Kona triumph, and have tweaked and refined it to produce this current incarnation.

It’s no surprise given Chris Boardman’s time trialling, pursuit and Team GB Cycling ‘Secret Squirrel Club’ background, that the R&D process behind every one of their Elite series bikes leaves no potential performance-gain left unexplored. The four-stage design process starts with CAD (Computer Aided Design), where a 3D rendered model of the bike and its components are created, using Chris and his team’s years of experience.

In keeping with their holistic real-world design philosophy, a rider is scanned into the model – and he’s not a super skinny, ultra-flexible aero-data friendly ideal. He’s a rider of average build with an average riding position.

The CAD designs are then tested with CFD (Computational Fluid Dynamics), which is effectively virtual wind tunnel testing and are refined to maximise performance. Once they’ve got the shape nailed down, FEA (Finite Element Analysis) is run over it, which simulates and exaggerates the loads and forces that riding will generate. This allows them to determine where the frame needs to be stiff and reinforced, where they can shave some grams and how the carbon fibres can be optimally laid. 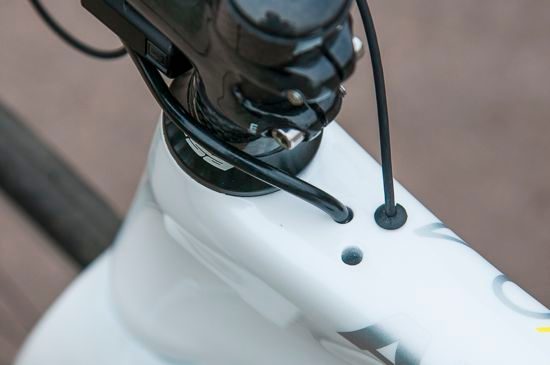 Finally, the bike and rider make it to the specialist bike-testing wind tunnel at the University of Southampton and are put through vigorous tests over a massive range of yaw angles that simulate real-world weather conditions in Europe and North America.

This incredibly thorough and realistic design process, along with Chris and the rest of the design team’s experience and expertise are what elevate the Boardman Elite Series of bikes above the cheaper open-mould competition. Even big-name brands will often exclusively publish bike-only aero data or test in very limited and favourable conditions.

The flagship AiR/TTE might be 4% quicker (which adds up to 144secs over 25miles at 25mph) than the 2012 AiRTT but don’t forget, that bike won Kona and this new one is an improvement on it, so we’re more than a little excited about the chance to take it out for a spin.

Compared to the 2012 AiRTT frame, the front end has been significantly tidied up, with all cabling now routed through the top-tube with the minimum amount of cabling exposed. Boardman have historically produced long and low bikes and, although the geometry is still aggressive and performance orientated, it’s not as extreme. The slightly taller headtube and shorter top-tube should mean that it’ll suit more riders, be more comfortable for long-course racing and be easier to run off.

The 30mm-deep Shimano RS31 wheelset aren’t pure aero, and are fairly heavy at 2,050g, but, with a retail price of £260, they’re not horrors either. They’ll be robust and reliable for training but we reckon you’d need to factor some race wheels into your budget to really get the most from this bike. The Continental GP 4000 tyres are definitely race-ready though and if you do treat yourself to a set of race wheels, could go straight over. 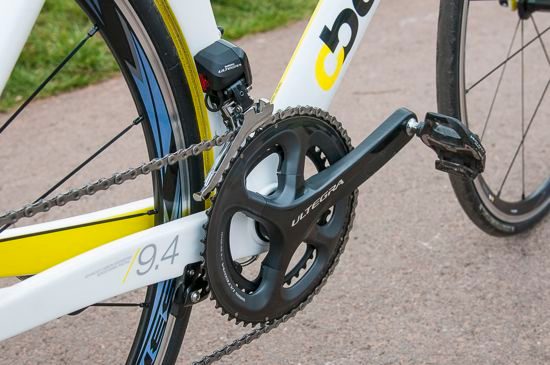 The AiRTT’s groupset is the complete Shimano Ultegra Di2 11-speed, with no lower-tier products or cheaper brands snuck in. The frame will accommodate either electronic or mechanical groupsets and the battery is neatly hidden within the seat-tube.

Standard-spec bikes don’t come with satellite shifters on the bullhorns, but if you’re targeting hilly or technical courses, Elite range dealers will be able to fit them. A set of Shimano ST-6871 shifters and brake levers retail at £249.99 but you’ll obviously end up with a set of Dura-Ace aero brake levers going spare, so we reckon this key upgrade should only set you back about £120, a no-brainer in our book.

The gearing is obviously race focused, with an 11-speed, 11-25t cassette and a standard 53/39t chainset. 11-speed really shines on a TT bike as, even with a relatively widespread cassette, there’s no rhythm-breaking mid-range jump. This chainset now runs through a press fit 30 bottom bracket and, as this is one of the areas that the Finite Element Analysis identified as needing some beefing up, there shouldn’t be any stiffness concerns. 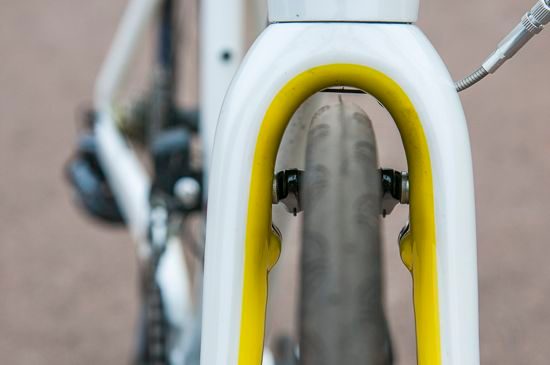 Braking is taken care of by the aforementioned Dura-Ace levers and TRP integrated callipers. These have always impressed and access holes are a welcome touch for easy adjustment. Another subtle but useful change is that the seat-post clamp has been updated to a super-neat hidden expansion unit hidden beneath a rubber hood. 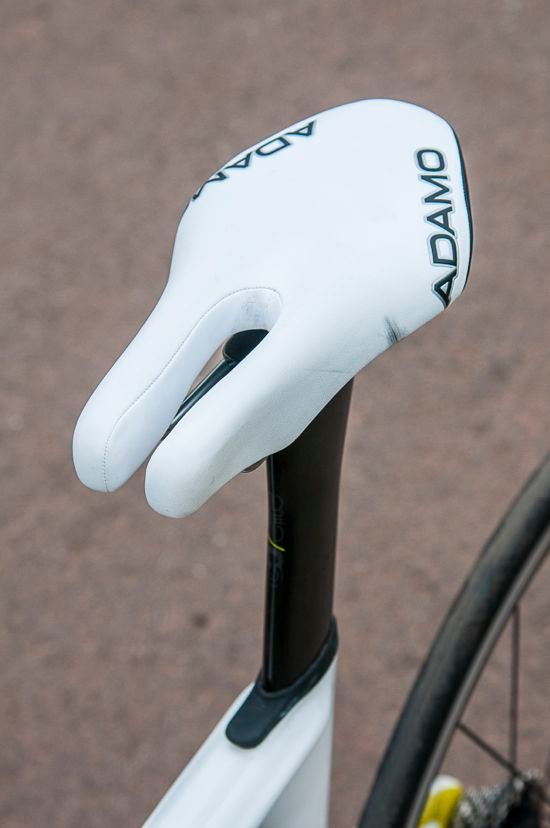 The Adamo saddle is new for 2014 and although it might not suit all riders, it’s a quality piece of kit. It allows a very forward, open-hipped riding position and, for many of their fans, puts an end to numbness issues. It sits atop a Boardman AiR/TT carbon seatpost, which now offers you four points of adjustment and seat angles ranging from 76-79º. The cockpit is the eminently adjustable Vision Trimax and, although not the lightest or most aero, should allow you to dial in a comfortable riding position.

With our size large tipping the scales at just over 9kg, it’s not especially light but, with aerodynamics trumping weight on a TT bike, extra grams doesn’t always mean less speed. 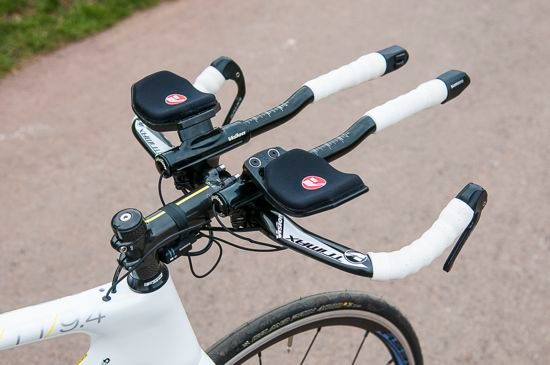 With so much adjustability in both the cockpit and the saddle position, dialling in your ideal ride position is easy and, with a few spacers jettisoned from beneath the stem, you’re soon feeling low, aero, and powerful but still surprisingly comfortable. If you’ve never ridden an Adamo saddle before, it can initially feel a little strange and we’ve found the adaptation process can take a little while. However, especially for long-course racing, if you’re prone to perineal numbness or soreness, they can definitely be worth persevering with.

Straight away the Boardman inspires confidence with its handling. There’s no sense of lethargy to change line or noticeable twitchiness, and it hits a real handling sweet spot. When you’re riding through twists and turns on the bullhorns, there’s a road bike assuredness that’s often lacking in TT bikes.

Despite the relatively heavy build weight, it also feels surprisingly nimble, responsive and when we hit some early short rises, it shows an impressive turn of speed. Once on some longer, flatter roads and settling into long-course cruising wattage, it rolls along sublimely. 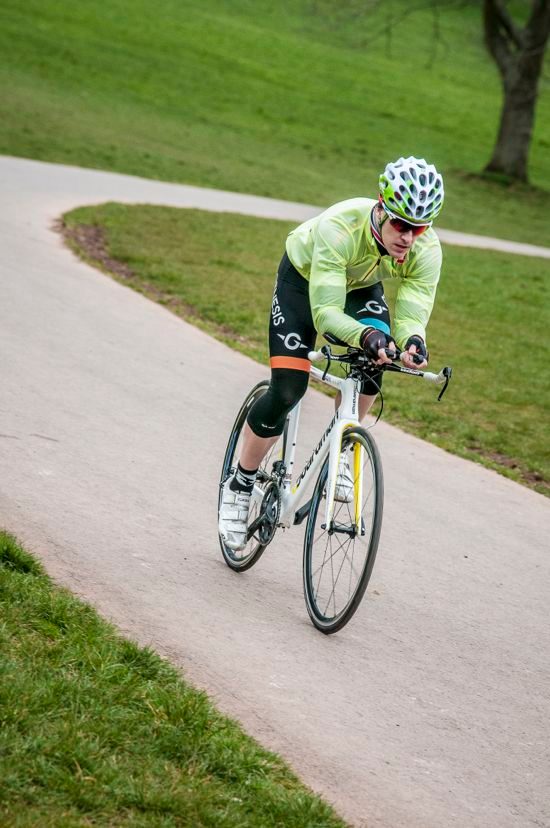 Despite purposely opting for a fairly aggressive position, it’s super-comfortable and, although feeling as though you’re punching a fairly minimal passage through the air, you don’t feel overly stretched. Road buzz and chatter is almost non-existent and its effort-to-speed return is impressive.

Despite some squally weather when testing, it’s a rock-stable ride and although the RS31s might not be windcheaters, they certainly give you the confidence to stay aero even in strongly gusting sidewinds. Shifting from the Ultegra groupset is faultless and the close-knit 11-speed block is excellent for maintaining tempo.

Moving on to some more rolling roads and upping the intensity slightly, it powers efficiently over the rises. You do really miss the satellite shifters though, and if you’re going electronic on a TT bike, they’re an absolute must have. It’s frustrating if you underestimate a rise and have to sit down to shift – you lose momentum and on a rolling course those losses can easily add up.

When we reach a local 10mile TT course, it’s time to really ramp up the effort, and the splits the Boardman returns cause a bit of a double take. They’re on a par with some far more expensive machines we’ve tested and that’s despite less than favourable wind conditions and the non-aero wheels. It surprises when you encounter some genuinely hilly terrain, too. It somehow seems to climb lighter than its weight – a very rare feat for a TT bike – and there’s no sense of heaviness from the wheels.

There’s not the spring and zip of a full-on climbing bike but, both out of the saddle at low cadences and spinning seated, it’s certainly not laborious at all. Again, you’d definitely want satellite shifters to make things a little easier, but it seems churlish to keep banging on about that. With excellent stability and handling, descending is a lot of fun and, in comparison with standard callipers, the TRP brakes are staggeringly good. That means you can afford to really delay braking and the acceleration out of bends rewards hard sprint efforts.

With all the excitement surrounding the launch of the AiR/TTE, the new AiRTT has been slightly overlooked. We’ll admit, even though we were excited about riding it, there was a bit of, ‘I wish it was the TTE’, when it first arrived. However, it’s totally blown us away, and if you’re looking for a TT bike to see you through a fair few years of triathlon racing and progression it certainly makes an awful lot of sense.

With this standard spec, it’d give you a significant performance step up from a road bike with clip-ons and from more entry-level TT offerings. You could be confident that the forward-thinking design ethos at Boardman means it won’t date and, on our test loops, it rode far above its price point and was up there with the £5k bikes we tested in issue 297.

As well as its lesser previous incarnation having a Kona crown on its palmarès, Meredith Kessler had just piloted her 2014 AiRTT to a win at Ironman New Zealand, putting in the fastest bike split along the way. Okay, her bike had some very bling Enve wheels but that’s what’s so exciting and appealing about the AiRTT.

The standard spec is great but the frame and groupset more than justify future upgrades to take it up to the highest level. Working with a hypothetical shopping list, we’d definitely spend the extra money for the satellite shifters and opt for a proven but not stupidly expensive wheelset, such as the £1,299.99 Reynolds Strikes.

As well as dropping a whopping 415g off the build weight, you’d have a genuine aero flyer on your hands. Yes, it’s now a £4,900 bike but don’t forget it challenged bikes more expensive in its standard guise. You should always look to buy a bike with a future and in this case, that future is very bright.

Ticks all the boxes, rides below its weight and keeps on surprising.

The frameset and full Ultegra Di2 allow us to overlook the slightly sub-par wheels.

You’ll struggle to find an equal in terms of spec and R&D investment at this price point.

Up there with the comfiest TT bikes we’ve ridden.