Ribble’s overhauled range of bikes is simply huge, with models for every discipline and builds for every budget. There’s no shortage of standard builds either, often in up to three colourways, and Ribble’s online Bike Builder allows you to customise any bike.

The basic price of the R872 Disc we have here is £1,399, but it was supplied with a couple of upgrades from standard. A carbon seatpost replaced the alloy one and the tyres were switched to Continental’s sublime Grand Prix 5000s. We didn’t choose them, but had we been customers those would be two elements high on our list for potential improvement.

Notice that the Ribble still comes in almost £350 cheaper than the next bike on test, but boasts a component specification equal to or better than its competition. This is largely due to the R872 Disc’s frameset costing less than its opposition, which could be viewed as comparatively budget or simply good value.

Lighter alloy or carbon bars and stems are available, plus multiple Fizik or Prologo saddles, alternate Mavic wheels, and even a left-side 4iiii power crank. Ribble now also offers custom-painted framesets for an extra £299. So is this a tale of a plucky British underdog kicking the establishment in the bottom bracket and taking the spoils? Let’s see how it got on. 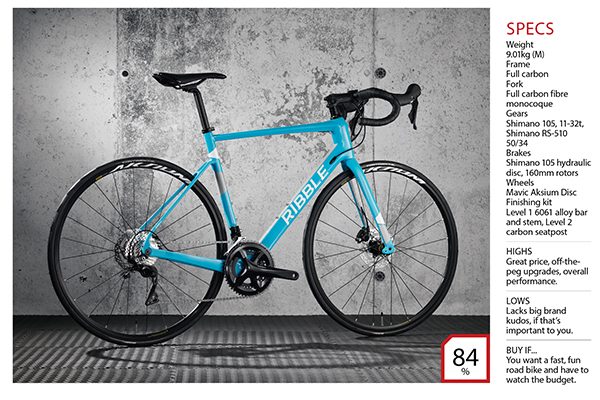 One part of the R872 Disc’s build that can’t be altered online is the groupset. You’re stuck with a Shimano 105 hydraulic disc groupset with RS-510 non-series 50/34 chainset, but that’s no bad thing as it’s a proven performer and all works perfectly together. With its 11-32 cassette, the gear range should suit just about everyone, even the aspiring racer, and the disc brakes never fail to impress.

The house brand Level handlebar feels good with an ergonomic shape and, together with the Level stem, resists twist and undue flex well. Prologo’s Kappa RS saddle is well shaped and comfortable with the carbon seatpost preventing most road buzz from reaching you. But it’s the lowly Mavic Aksiums, and rather more special Conti tyres, that sing once you inject powerful pedal strokes. Inexpensive they may be, but the Aksiums deliver lively performance and really feel quick.

With the tyres measuring 26mm, and with 75-80psi inside, the Ribble has constantly chatty surface feedback. Road vibrations are more obvious at higher speed, but the ride quality isn’t harsh or uncomfortable. We actually
enjoyed the feeling of not being disconnected from the road.

The Ribble’s handling is predictable and sound, its Contis helping to gather up any filthy backroad over-exuberance while still allowing us to push the bike’s limits and exploit its speed. It romps uphill with  urgency and willingly accelerates over the top, then descends with assurance.

Mounts for full mudguards tick the practicality box, but the clearances at the fork and stays look a little mismatched, with heaps of room up front and probably just space for a 28mm tyre at the back. All of the control lines pass through well-sealed ports and the frameset sports lots of reflective graphics.

Verdict: Brand snobbery may come into it when considering whether or not to buy this bike, but if you can hop aboard the R872 Disc, you’ll realise that it’s just excellent, fast fun. 84%