We’re not quite sure why this Merlin is named after a mythical bird but, as you’d expect from the established online retailer, it does have a very appealing price tag. Just £1,299 looks like tremendous value for a bike with Shimano’s 8000 series Ultegra and hydraulic disc brakes. The rest of the kit isn’t too shabby, either.

Somewhat unusually for 2019, the seatpost is 31.6mm in diameter. This might suggest a ride that’s a little firm. Not a bit of it. There’s no radical oversizing of any of the tubes and there’s even an old-school BSA threaded bottom bracket. The tyres are also quite modestly proportioned compared with some of the bikes here.

The frameset and Schwalbe’s 28mm Durano rubber do enough to take the harshness off any road surfaces. The frame is also designed to accommodate wider tyres up to 38mm, so gravel tracks are easily within its remit.

This isn’t a bike built for speed or shattering Strava times or triathlon race-day PBs. This is a mile-eater, and a very good one at that.

The ride is unfussy but will still let you hit a decent pace – there’s no lack of efficiency through the frame, the 15cm head tube isn’t that tall and the 73° head tube delivers sharp handling. We hit very good times on our 25km commute and it also excelled on longer rides.

The Roc doesn’t exactly fly up hills but the advantage of modern gearing is the 34 x 32 combination. Just sit in a low gear and you’ll be able to spin up double-digit inclines, which is what we did on our local steep hills. It descends very well, balancing sharp steering, assured stability and excellent braking from Shimano’s hydraulics.

Unlike other disc-braked bikes often tested, the Roc doesn’t have thru-axles but sticks with quick-release levers. In spite of that we couldn’t discern any noticeable flex-induced brake rub and noise was minimal. Schwalbe’s 28mm tyres even coped with tracks and towpaths. You don’t get the same grip as you do from dedicated 38mm or 43mm gravel tyres but you’re not slipping and sliding around at all.

There’s not much more to say about Shimano Ultegra that we haven’t said a million times before. It’s a great groupset and fantastic on a bike at this price. The Kalloy kit is fine, if not that exciting. We got on well with the saddle, though the red and white Selle Italia is bit of a clash with the blue-and-grey frameset.

The Roc makes a great year-round commuter or training bike, helped by mudguard fittings, clearance and rear rack mounts. It’s also both comfortable and efficient enough for long days out, light touring and weekends away.

So overall this is yet another quality, well-priced bike from Merlin, and one with great credentials. The 31.6mm seatpost and quick-release levers may look a little out of place these days, but Merlin say there’s a new version on the way and we’re guessing these will be the first things to get a makeover. 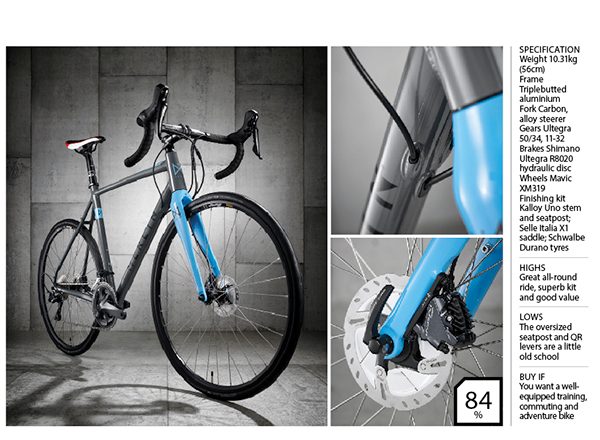 Debbie Graham is the senior digital editor for YourHomeStyle, and is passionate about vintage interiors. In her free time she loves nothing better than scouring second-hand and vintage shops for bargains and upcycling projects. Her home is a Victorian house that is a bit of a project and when she's not putting buckets under leaks you can find her painting and patching