The Defy Advanced Pro 2 is a stunning machine that packs in value and great looks, says reviewer Warren Rossiter, who scores it 93%

The Defy defined a genre. It took the best elements of Giant’s racing TCR and combined them into a ride position that’s not at pro-level extremes of long and low.

The Defy comes with some very clever bits of design and execution in the form of Giant’s D-Fuse concept. The D-shaped seatpost debuted on Giant’s TCX and the Defy adopts something similar. The D-shape of the tube maintains lateral rigidity but allows the post to move enough to smooth vibrations from poor road surfaces.

Giant has also rolled the D-Fuse technology into the handlebar. Here the shape (which can cause problems
if you’re planning to use the Defy with certain clip-on bars – check with a Giant dealer) is orientated so that it has compliance when there’s force coming from above, such as when you hit a pothole. But when you pull on
the bars when sprinting, they’re claimed to be 30% stiffer than a standard bar.

This Defy also features Giant’s own semi-integrated stem (the SL Stealth), its own saddle, wheels designed in conjunction with DT and new wide 32c Gavia Fondo tubeless tyres. The brake hose routing is neatly executed through the Stealth stem, although the gear cables run externally from the bar into a port on the head tube. There’s a lot of smart details with the integrated speed/cadence sensor in the rear non-driveside chainstay providing accurate data. 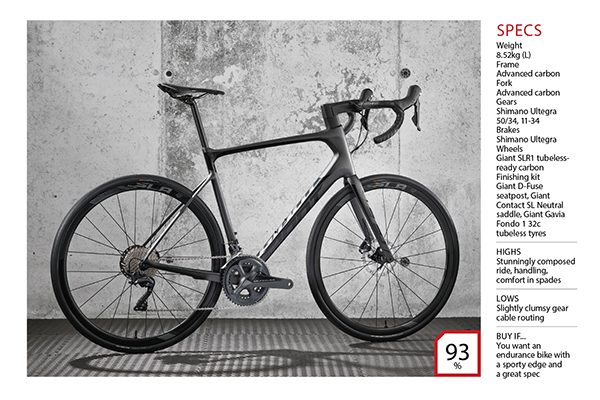 On the road the Defy is gloriously composed with a wonderful ride quality. The ride position afforded by the 605mm stack and 390mm reach errs on the sporty side of sportive bikes. Over rough surfaces the D-Fuse post and bar work harmoniously with added smoothness afforded by the new 32c Gavia tyres. We ventured onto a few gravel road sections when testing and the Defy excelled here, as well as it did on tarmac.

When climbing, the Defy has plenty in its armoury. First up is the carbon wheelset: though the Defy isn’t the lightest bike on test, it rides with the same flighty feel as the svelte Simplon with a wheel package that’s 1,500g for the pair, plus tyres that run without inner tubes. It gives the Defy an eagerness when climbing. Great real-world gearing of a 50/34 chainset and wide 11-34 cassette with a low one-to-one 34/34 gear meant we went looking for the steepest sections on local climbs to see how the Defy held up. Having gearing this low meant we could ascend double-digit gradients in adverse conditions, with the all-weather grip of the Gavia tyres aiding progress. The only small niggle is the saddle – this rider’s personal preference is for a more supportive design.

When the road turns downwards, the Defy’s Ultegra disc brakes come to the fore. Our criticism of the 2019 models was that in big sizes (large upwards) the 140mm front and rear rotor pairing didn’t stand up to hard braking, with the small front rotor getting hot and noisy all too often. It now has a 160mm front, and both rotors are premium Ultegra IceTech.

We’re smitten with the Defy’s handling. The 72.5° head angle, and race bike-esque 58mm trail on the fork, add a nimbleness to steering that, when combined with the longer wheelbase of 1,025mm, balance into a bike that is quick to respond without becoming twitchy.

The Defy Advanced Pro 2 is a stunning machine that packs in value and great looks. It’s still early in 2020, but the Defy is already one of the year’s bike highlights.

Verdict: The Giant Defy is a bike that has impressed us over the years in its flagship model. Lesser bikes have compromised key components and never fulfilled the potential, but this 2020 bike comes with the full D-Fuse component package with brake upgrades and a better wheel package than many bikes at a much higher price. 93%

The Advanced Pro 3 (£2,899) shares the same key components with the D-Fuse bar, stem and post all figuring and the SLR1 carbon wheels, too. It drops down to Shimano’s reliable 105 groupset to save over £600 on the Pro 2’s price tag.

How does the Cycle to Work Scheme work?