Genesis specialise in bikes made of metal. Plenty of other bike manufacturers do likewise, but they often shun carbon in order to concentrate exclusively on one particular material.

But while there are many steel bikes in the Genesis stable, there are also bikes made from aluminium and titanium. And that titanium bike – the Equilibirum – is what’s being tested here.

The Equilibrium Ti shares the same geometry as its steel counterpart, but is made from 3AL/2.5V titanium – a titanium alloy made up of 3% aluminium and 2.5% vanadium. It’s about as strong as chromoly steel yet around half the weight. 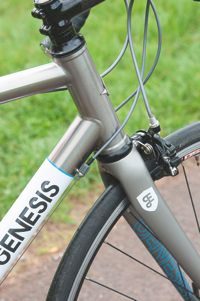 The frame is still forgiving but, if comfort is your main priority, you might want to wait for the reduced-diameter tubeset on the 2014 model.

The other things that are wide on the Equilibrium Ti – but which help to soften, rather than stiffen, the ride – are the 25mm Continental tyres. Pairing this wide rubber to the frame is a smart move and helps to balance the added stiffness that’s been built into the frame without giving it a soggy or flexi feel.

Shimano’s trusty 105 groupset faultlessly takes care of shifting, but sadly not braking. Tektro R317 calipers have been specced instead and are rubbish in the dry and even worse in the wet. It might be just the blocks that are poor, but the calipers’ case isn’t helped by a quick-release lever that makes opening them much fiddlier than it needs to be.

Aside from the brakes, the only other quibble is the carbon fork that’s been painted matte silver. The idea is that it should match the frame – except it doesn’t really. Also, trying to avoid the black fork clashing with the beautiful bare-metal aesthetics seems pointless when the brakes, bars, stem, seatpost, saddle and crankset are all black anyway.

The Equilibrium delivers a beautifully balanced ride that lives up to its name. It’s responsive and avoids the harshness or aggression of an uncompromising carbon race bike. It also manages to provide comfort without feeling vague or overly flexi. 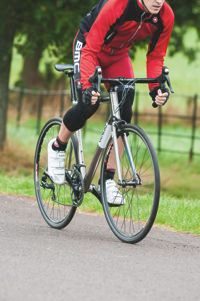 At low speeds, it’s a bit dull and uninspiring. Some bikes seem to encourage and goad you into going faster as soon as you set off, but the Equilibrium isn’t one to chomp at the bit. It’s by no means sluggish; it just feels a bit bland when you’re plodding along.

That all changes once the speed picks up, though. Get it above 20mph and the Equilibrium comes to life, feeling like a cross between a cruise missile and a limousine. It flies along, remaining calm and completely unperturbed by broken tarmac or potholes.

While it may lack some of the sharpness of a competition-bred carbon bike, the Equilibrium is certainly no slouch. Think of it as a Bentley Continental: high performance paired with luxury.

Handling: 87%
Dull at slow speeds, but takes off when the speed picks up.

Spec: 69%
Fine for the most part, but let down by its brakes.

Value: 89%
Great-value all-rounder that’s tough enough to take on touring and commuting as well as sportives and racing.

Comfort: 91%
It’s got enough plush to match its pace.