Thirteen years – that’s how long the world has known about graphene, a form of carbon that’s lighter than paper but 200 times stronger than steel. Only discovered in 2004, it took just 12 years to make its way onto a bike when Stuart Abbot, CEO of Hampshire-based Dassi, presented the 750g Interceptor frame with graphene layered onto its otherwise carbon fibre chassis.

So why graphene? Well it’s an extremely malleable material, and when used on a bike frame it acts as a shock absorber to reduce road noise and allows the rider to produce more power, so the theory goes. “We’d expect the ride to feel better stiffness, smoothness and power transfer”, says Abbot. “The frame has been taken up by a wide variety of our sponsored riders, including triathletes, and they love the low weight, stiffness and road noise-cancelling features.”

The Interceptor isn’t actually the lightest frame money can buy just yet (Trek’s latest Emonda, as an example, weighs just 590g), but Dassi claim there’s potential to get it down to a miniscule 350g. The immediate problem lies with the layering process of graphene sheets: it’s very narrow and tricky to work with, so at the moment less than 1% of the frame is actually graphene. Dassi say it’s unlikely to be a much greater ratio in the future, as too much would create a brittle and ceramic-like frame.

The trick to reducing weight is using less carbon, not more graphene, and this can be achieved by improving the layering process so graphene covers more carbon fibre, an ongoing development between Dassi and academic researchers. Another issue with using such a premium material is price: our test bike comes in at an astronomical £12,000, and the frameset alone is £5,995, making the Interceptor among the most expensive road bikes in production.

For that spend, you get a product that’s fully designed, manufactured and assembled in the UK, specific to your exact requirements from components through to paint job. Formula One technologies and aerospace-grade carbon composites are used, along with graphene in the frame, a world first in the bike industry. It’s an exclusive product for exclusive customers, and Dassi are fiercely proud of their all-British manufacturing process. 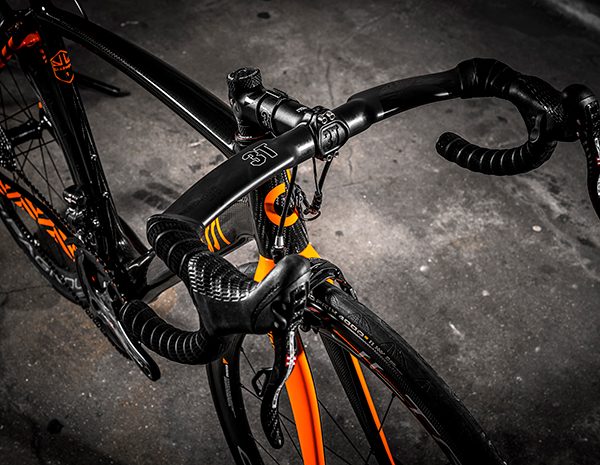 We weighed our complete test bike at 7.2kg, just over the UCI’s 6.8kg minimum weight restriction that ITU triathletes are currently bound by. Looking closer at the frame (you can’t miss the fluorescent orange) there’s a curved theme. The seatstays have a flat surface but are arched aggressively, and the bulbous chainstays flare out where they meet the rear hub. The inclusion of graphene had no effect on Dassi’s choice of geometries, they just believe that the curved seatstays create an airfoil that makes for better aerodynamics, dampening vibration for comfort. And from our test rides, we agree; the Interceptor providing a better first impression than any other bike we’ve tested  in terms of comfort and vibration-cancelling qualities.

While it felt like sacrilege to purposely take a five-figure bike on some of the sketchiest roads the south west has to offer, it was necessary to put strength and stiffness to the test: and the Interceptor passed exceptionally. While differences between high-end aero bike frames are usually small in terms of ‘feeling’, the confidence we felt on the Interceptor over rough road surfaces was the most pronounced we’ve ever come across.

Disappointingly for us, however, the bike was specced with 50/34 compact chainrings, which meant we couldn’t fully appreciate it at top speed and ran out of gears at times during a 45min effort at threshold power. But even when we were pedalling furiously in an attempt to keep things consistent, the Interceptor held its line with aplomb. It goes without saying that such a light bike climbs fantastically well, and with Strava segment after Strava segment falling on our regular hilly route, we’d be keen to know what a graphene frame optimised for climbing with lighter wheels would be capable of.

It’s worth noting that the £12k price of our test bike is partly down to the luxurious build: the electronic Campagnolo Super Record EPS groupset is £2.5k alone, and Campag’s Bora One 50mm deep wheels are also over £2,000. Super Record EPS is a truly lovely groupset, and we’d argue the most natural-feeling electronic gearing money can buy. But those that favour simple efficiency may be inclined to pair the Interceptor with a Shimano or SRAM groupset, with shifting tucked under the brake levers, as Campag’s up-shifter on the inside of the drop is difficult to access, requiring a repositioning of the thumb if you’re on the drop bars.

A less expensive but quality wheelset like the Hed Jet 4 would bring an Interceptor build under £10K; you’d just miss out on the pleasant whooshing sound from the excellent Bora Ones when wind passes through their three-laced spoke pattern at the back, designed to absorb road buzz and improve strength. The wet braking is also superb, so credit to Dassi for their taste in wheel pairing with a frame that already makes for a comfy ride.

THE BIKE OF TOMORROW 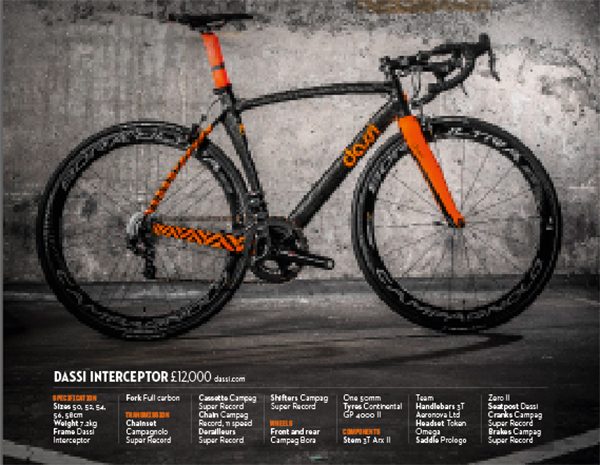 As you may have gathered, after 200km on the Interceptor our impressions are extremely positive: but £12,000/price-of-a-nice-car positive? We want more proof that graphene makes a faster bike – not just a more comfortable one – if it’s truly the future of frame building. We’ll be checking back to see how the Interceptor fares in the wind tunnel, which Dassi have pencilled in for autumn. We’re surprised tunnel testing hasn’t been done already given the resources that have gone into bringing the Interceptor to life but, if the results are good and some wealthy bike fanatics are reading this, we’d love for investment to pour in and the process to advance further: mostly out of sheer curiosity for what a frame weighing the same as a pair of run shoes would feel like to ride.

Dassi fully plan to roll out graphene-infused tri and mountain bikes in the future, but have ‘a lot more research to do’ before that becomes a reality. The cost will come down when the process is smoothed out. They’ve taken on a monumental task in revolutionising frame design: time will tell if it’s been worth it. Our early indications would suggest so…

Influenced by Formula One and aerospace tech, Hampshire’s Dassi were created by engineer Stuart Abbott in a bid to develop the British cycling market, creating the first entirely UK-made carbon bike in 2016.