Smart turbo trainers offer you all the data and distractions you could ask for when it comes to indoor biking and training. Jack Sexty tests five of the best

With the latest generation of smart trainers being so sophisticated – and even fun when connected to a virtual cycling app – increasing numbers of triathletes are turning their backs on the great outdoors altogether during the colder (and sometimes warmer) months, in favour of their home training set-up. You may even be lucky enough to have a whole room dedicated to your suffering – a ‘pain cave’ as we like to call them.

Gone are the days when you’d simply lock your bike into a ‘dead’ turbo trainer and use a dial to create resistance. The more sophisticated smart trainers in 2020 come with power meters, Bluetooth connection and plenty of built-in virtual resistance, so you can push yourself to the limit without having to halt because of the cold. All five trainers on test are interactive and compatible with many virtual training apps, which can essentially turn an arduous slog-fest into a cycling computer game.

With the prices of all five smart trainers on test higher than many entry-level bikes, they’re a serious investment, but certainly a worthwhile one if you’re going to use it year-round. To test the trainers, we used the same bike and did numerous sessions on each, connecting them to the Zwift training app. We used power meter pedals we know to be accurate to check consistence in power readings, and took value, specification, ride feel and quietness into consideration to reach our verdicts. 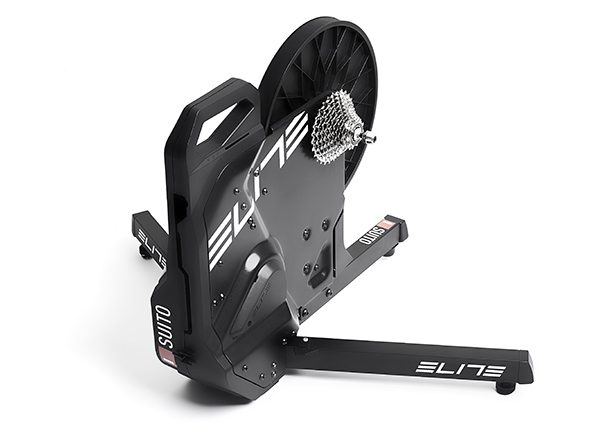 Weighing in at 14.5kg, the Suito is the lightest trainer on test and also has a useful carry handle. An 11-speed Shimano cassette out the box saves time and money, as do the quick release and thru-axle adapters, and the legs simply fold out, so it’s all ready to go.

A front wheel block is included, and there’s a cadence sensor, power measurements accurate to 2.5% and inclines up to 15%. It was a tad noisier than the others on test, according to our readings (peaking at 65 decibels), but it’s still impressively quiet. It connects to our training app of choice instantly, and in ERG mode the resistance shifts smoothly. Although Elite reported firmware issues when the Suito first launched, we found the power readings to be largely accurate compared to our control pedals.

Verdict: All the features a triathlete needs, at a better price than the competition, 90% 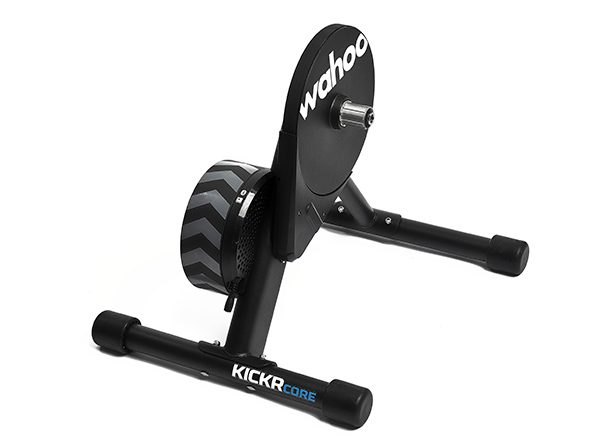 The Kickr Core essentially works the same as Wahoo’s flagship Kickr, with a smaller flywheel and a lighter feature list. For £300 less you miss out on a built-in cadence sensor and a cassette, while the max power it can withstand is 1,800 watts, as opposed to 2,200 on the Kickr. You have to bolt the legs on yourself – a simple job that takes three minutes – and when you get started it connects to apps via Bluetooth quickly. It’s quiet, with the noise peaking at 62 decibels, and the power readings appear accurate with Wahoo claiming accuracy of +/-2%. The max incline is 16%, and you can also attach Wahoo’s Kickr Climb (available separately) to get the full virtual climbing experience. Sadly, moving it around is a pain, but if it’s for a dedicated pain cave this won’t be an issue. uk.wahoofitness.com

Verdict:  Awkward to move around, but a highly capable and quiet trainer 87% 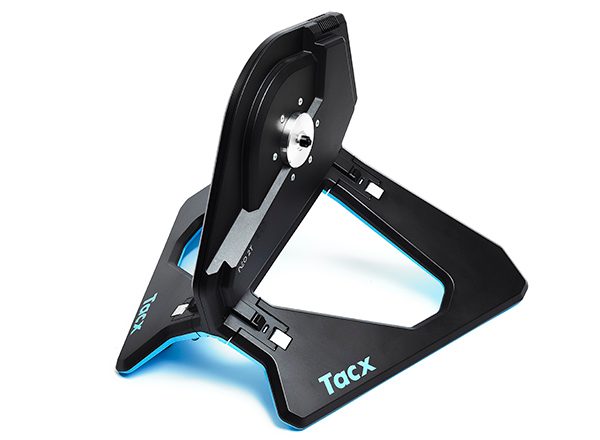 Tacx was playing catch-up before its original Neo trainer was updated, but the design has been nailed with the Neo 2T. Proclaiming it as ‘the most powerful, accurate and realistic trainer to date’, there’s even more motor power (with the option to run it wireless), greater stability and, finally, thru-axle compatibility out the box. It looks like a spaceship with the unit lighting up underneath, and the huge wings make the Neo 2T absolutely solid, even though it’s very heavy at 21.5kg. Power accuracy is spot on, and we could really notice the superior quality of the ride feel. It’s also super quiet, with the lowest reading of the four direct drive trainers in the test. It’s a huge investment but, if you’re after the most capable smart trainer on the market, it’s worth it. zyrofisher.co.uk

Verdict: Very pricey, but a truly deluxe trainer with all the bell and whistle 92% 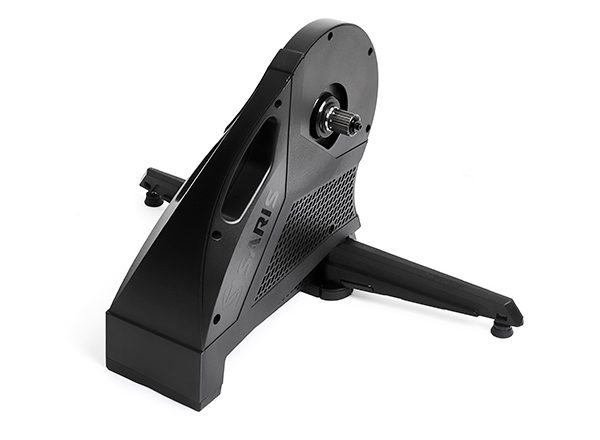 Like the Tacx, the H3 doesn’t have a cassette included, which makes the price even steeper. Yet there’s everything else you’d expect from a top-end smart trainer, with claimedpower accuracy of +/-2%, a 2,000 watt max power rating and a built-in cadence sensor. The H3 instantly connected to our app of choice, with noise peaking at 59 decibels at 35km/h. The max climbing grade is 20%, second only to the Tacx at 25%, and Saris has added internal cooling tech to keep the data accurate. The resistance felt responsive, and if you prefer riding without entertainment there’s also a ‘headless mode’ that simulates resistance without needing an app connection. It’s chunky at 21.3kg, but there’s a carry handle to help you move it, while you get all the adapters you could need. raleigh.co.uk

Verdict: Feature-packed and accurate, but with a big price tag and overall weight 86% 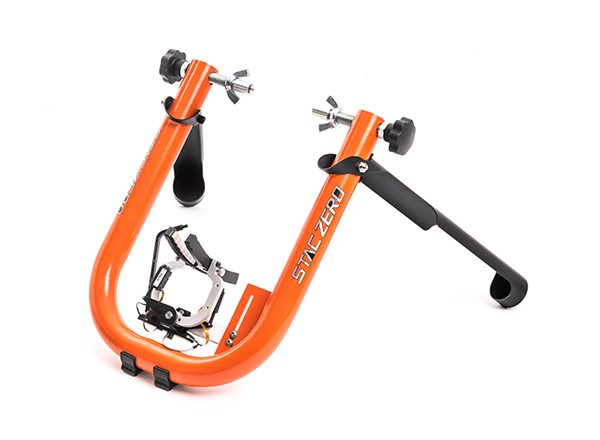 The resistance on this intriguing trainer is created by magnets that automatically adjust on your rim, meaning you don’t even need a tyre mounted at the rear; the rims have to be alloy as the magnets won’t react with carbon, so a cheap training wheel suffices. The big sell is that it’s virtually silent, with only a slight noise coming from the drivetrain. It’s a full-on smart trainer with a power meter and Erg Mode (which automatically sets the resistance). The rechargeable battery lasts 10hrs, so it’s totally wireless. The supplied ‘wheel weights’ need to be slotted on your rear wheel and are essential to creating a realistic experience, yet it’s an awkward task and we’d rather a pre-installed wheel with weights. But if you have neighbour concerns, it’s worth considering.

Verdict: Unique concept and quiet, but its rivals are more straightforward to use, 75%

All of the direct drive turbo trainers in this test have comparable riding experiences, with very stable platforms and smooth, natural ride feels that are impressively quiet. The Stac Zero Halycon is a very different proposition – if it’s silence you want, then look no further. But it’s the trainers from Wahoo, Elite, Saris and Tacx, rather than this one, that tick most, if not all, of the boxes for a modern triathlete.

The Elite Suito comfortably bags our Best Value award, as it’s not only the most affordable but also comes with handy bonus features compared to the Wahoo Kickr Core, which is £50 more expensive. While the Saris H3 is a very capable trainer and, on paper, looks better value than the Tacx Neo 2T, for us the latter wins and is the benchmark smart trainer at the time of writing.

The ride feel of the Tacx is sublime, and it has genuinely useful extra features, such as pedal analysis and wireless functionality. These go way beyond being gimmicks and they totally justify that huge price tag. Plus, it’s the quietest of the direct drive trainers on test.

Can riding on a turbo trainer damage your carbon bike?

What’s the difference between cycling on a turbo trainer and rollers?