He might have mastered an extra seven disciplines, but as I forgot to point out to Daley Thompson at the Tri St Lucia finish line, the thing about decathlon is that no matter how poorly you perform – if you can barely put a shot, hurl a spear or leap a hurdle – you at least get to slog round the run with everyone else.

As I set off playing catch-up on a four-lap out-and-back 10km trot toward Pigeon Island on Saturday morning I was reminded for the umpteenth time there is no such mollycoddling in the brutally harsh world of triathlon.

My shallow victories rarely extend beyond ‘unlapping’ myself from the fish-swimmers and axe-bikers that plague this damn sport and the only difference on this Caribbean adventure was counting my girlfriend amongst their number. I even managed the rare and dubious distinction of a faster run split than swim, which might have been down to the gentle current, but is more representative of how much I’m regressing in the water.

At least there was some comfort in being cheered on by Steve Cram (Tri St Lucia is awash with these Olympic types), finally returning the favour after I leapt up and down on my living room sofa as he chased Seb Coe down the home straight in Los Angeles. It only took him 30 years.

Anyway, let’s put the race talk on ice for now because if you’re planning on making the trip to take part in Tri St Lucia  on Saturday, November 21 next year, the heat of competition is only part of the lure. Escaping the British weather is a far more acceptable excuse and – if you can unchain yourself from the sun lounger – the island has plenty to offer.

Even if your bank balance cannot handle the room rates, a tour of the luxury hotels fall little short of spectacular. The Landings, which doubles as the Tri St Lucia HQ, is a stunning beachside location in Rodney Bay in the north west, and travel south on the Caribbean Sea coastline and you’ll pass a glut of glorious residences before eventually arriving at Soufriere, where Jade Mountain will put you up for $27,000 a week with an infinity pool at the foot of the bed.

This might be a triathlon blog, but this hotel demands a little more attention. You find it at the end of a bumpy old track that is all part of the illusionary preamble (if you can afford to stay here, you can afford to fly by chopper), and the humble reception doesn’t allude to the majesty of what lies above, where cut into the cliffs, Canadian architect Nick Troubetzkoy has engineered a masterpiece that becomes more impressive with every step.

The place simply oozes romantic charm, but with no proper walls or windows, it sounds a little risqué when 70 per cent of guests have come straight from their nuptials. Cleverly, while guests are treated to unobstructed views of the sun rising over the Pitons, there are no sight lines for a sneaky return peak at a full moon. The only thing more priceless than this unspoilt panoramic would be the looks on the guests’ faces when X Factor’s fame-hungry wannabes rolled up a few year back to use the hotel and butchered both the tranquillity and a couple of Westlife classics.

Once done with the swooning, watersports range from sailing to snorkelling, aqua biking to banana boating, but as mentioned, this is supposed to be a triathlon blog, so let’s get back to the real action. Those contemplating signing up for next year should consider it more a week-long festival than a Saturday morning race. The Landings has been transformed into an Olympic Village, with Thompson and Cram leading free run clinics, and local hero Jamie Peterkin, who swam 50m freestyle as St Lucia’s first-ever Olympic swimmer in Sydney, putting on daily swim masterclasses. 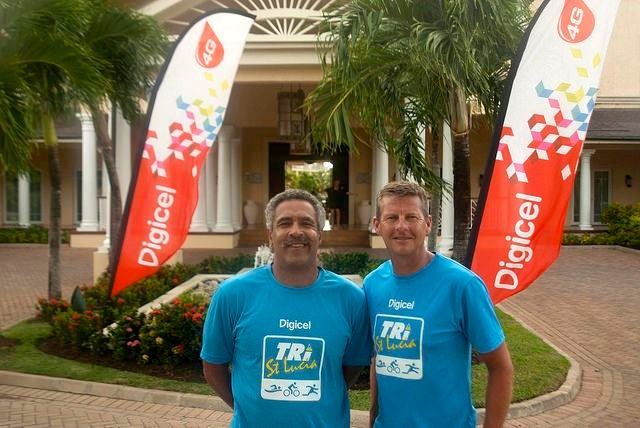 As well as the technical sessions, there was a fun run, 2km sea swim, and aquathlon to take part in, although whoever paced out the 3km run might need to work on their stride length. It’s all entirely relaxed, which is probably just as well given ‘All Inclusive’ in these parts is akin to being hooked up on an intravenous drip of spiced rum.

The actual race takes place on Saturday at 7.30am and offers the choice of three distances, the Dagger, Pistol and Cutlass in ascending order of length and named after Britney Spears’ yet-to-be conceived offspring. 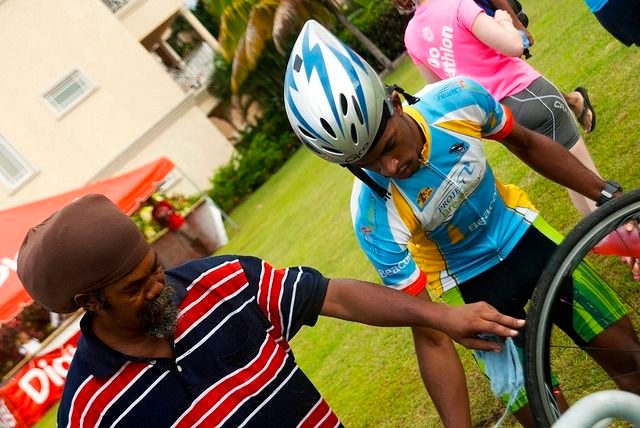 Curiously the Cutlass – the one I did (1.5km swim, 26.4k bike, 10km run) – was nominally the ‘toughest’, and whilst I’m no expert in maritime warfare, if it came to a mutiny I think I’d opt for a pistol. The overarching name for the triathlon is Blackbeard’s Revenge, a fearless English pirate of the 17th-century and keen triathlete who would force his enemy to walk the finishers’ chute.

Once the race started it became immediately apparent that it wasn’t the English who had come to loot St Lucia, but the French, or to be more appropriate, the Martinicans – a Gallic dependency some 50 miles or so north (judging by how adept they were, they probably swam to the start line).

You could tell they were good because they all had matching tri-suits and the only race they didn’t win – the men’s Dagger, a quick-fire 200m swim, 6.6km bike and 2.5km run – might have been staged for the cameras as the British bloke that crossed the line first decided to milk the moment by proposing to his girlfriend. Nothing says ‘marry me’ more than a loving embrace from a man in a salty, sweaty tri-suit, but Daley seemed impressed with the ring and that’s a man who has collected plenty of bling over the years. 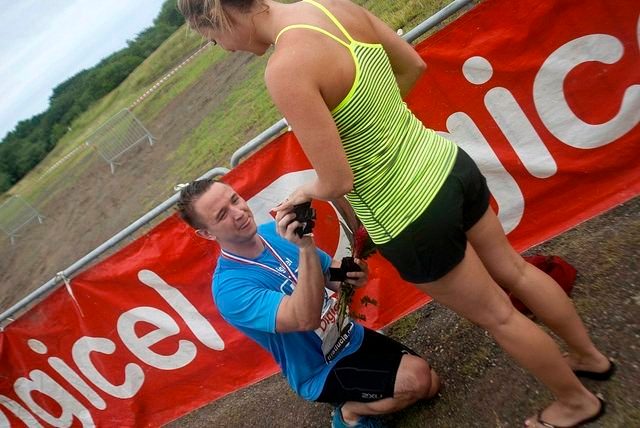 We were last off circa 8am, which given ‘St Lucia time’ could just have easily been Wednesday afternoon, but there was a degree of urgency because we were racing against the rising midday sun that could beat down on a pasty Brit in the style of Floyd Mayweather v Ricky Hatton.

The swim started in Rodney Bay (Only Fools And Horses has always been popular in St Lucia), but it was obvious by the first turn buoy who the plonker was. Thirty people started the Cutlass and I’d lost sight of all of them inside 100 yards. Way to go. A very long way to go.

It was over, eventually, and in saddling up, I’d opted not to bring a bike, figuring a) I’d have to clean mine, and b) the extra baggage charge was more than it was worth. I did pack my bike shoes but forgot the pedals to clip them into, meaning I was mashing down in substandard fashion with my running daps.

The actual bike course would have given Danny MacAskill the heebie jeebies. Four times we headed up to Cotton Bay negotiating pot-holes the size of Shoreditch and a stretch of speed bumps the Martinicans sailed over in the style of Evel Knievel.

By the time I hit the run, Xterra terror Clement Briere – again from Martinique – had almost finished, and while I overtook a few, my most noteworthy moment was saving a fellow competitor from careering headlong into an open car door after they’d adopted the all-too-familiar ‘gaze straight down so I can’t see how f***ing far I’ve got left to run’ pose. 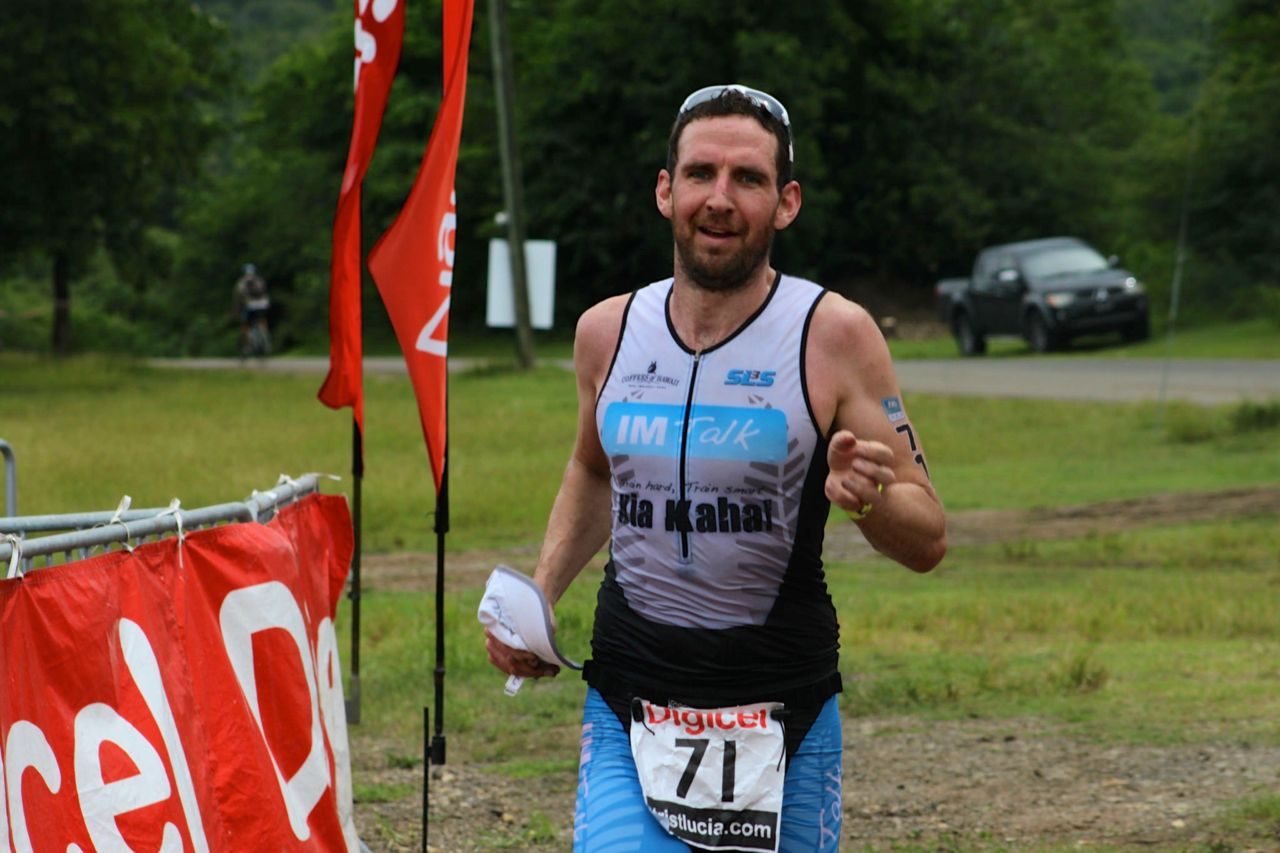 I looked jealously on at the kids’ races where they allowed the use of armbands and the action culminated with a paratri event for children from a local special needs school. The day wasn’t done though and a celebratory buffet and awards ceremony on the Landings’ lawn gave us the chance to reflect as the Piton beer went down quicker than the setting sun.

Were you lucky enough to race this year’s Tri St Lucia? Let us know in the comments!

Bike roadside repairs: what tools to carry cycling and how to use them for simple repairs