Regular readers of this bumwash may recall that a couple of months ago I completed a challenge which involved swimming 100 metres in 100 seconds, 100 times.

When I was offered this challenge by my evil swimming coach, had I paused for a moment to do some rudimentary mental arithmetic I might have reasonably concluded that attempting such a challenge would probably kill me stone dead.

However, in the best triathlete tradition the word ‘Yes’ was out of my mouth before the words, ‘That’s 10km of swimming in 2:46hrs and 0.7777778 seconds’ had connected with anything in my brain.

Having endured this watery torture you might think I’d be wary of any further challenges laid at my feet by my evil swimming coach, and I’m delighted to report that I haven’t fallen for it once… In fact, I’ve fallen for it twice.

The first was a cunningly worded invitation to do my back in by joining the ‘Mile Fly Club’, which involved swimming 1,600 non-stop metres of butterfly. Upon completion I was in such a state that when I oozed out of the pool at the end, all the spectators present were looking at my body in the same fearful way that a pensioner looks at snow.

All this is nothing, however, to the second challenge I accepted, which is to swim a million metres in a year. Yes, that’s right. One million. In a year. A fact I don’t particularly advertise about myself is that I twice failed my maths O-level at school and I have the same aversion to numbers as I do to age-inappropriate, leopard print thongs.

Fortunately, due to the invention of the calculator I’ve managed to get away with being an algebraic dunce all these years, although it does occasionally come back to bite me. When my evil swimming coach put this challenge to us, this was one of those occasions, because had I been able to add up I would have worked out that that’s 83,333.3333333m every month, or 20,833.3333333m every week, or 6,944.4444444m per swim based on my usual three sploshes a week.

But, once again, I blurted out the word ‘Yes’ like I have some form of Tourette’s and I’m now condemned to a watery grave for the foreseeable future. (NB. Maths-types, if these figures are inaccurate, please address any letters of complaint to my former maths teacher, Mr ‘Stinky’ Temple, or to Google). 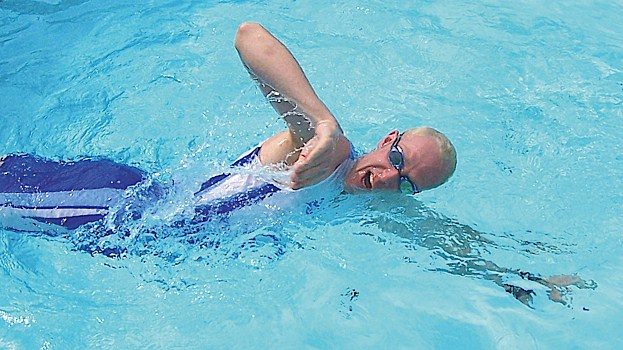 Quite why I’m doing this is anyone’s guess. It’s not like it’s going to do my triathlon performances any good because even though I am getting faster, we all know the win ratio for triathletes who are first out of the water is about the same as the win ratio of the England cricket team.

It’s also not like I’m ever going to make it as a swimmer because my body shape is entirely wrong, with most swimmers appearing to look like a hut on stilts with large torsos but unbecomingly thin legs.

It doesn’t matter though because now I’ve started, I can’t stop. This may at first seem like admirable determination on my part, but in truth it’s knowing the massive levels of p*ss-taking I will endure from my mates should I quit that is keeping me going ahead with the challenge.

Recently a triathlete chum told me that he had acquired a ‘Commitment Aide’. A person whose job it is to tell my friend that they are ‘awesome’ and ‘on an amazing journey’ each time their multisport motivation flags. From what I could see, the main outcome of him having a ‘Commitment Aide’ was introducing me to an expression that made me want to vomit.

However, it also got me thinking that I’m lucky not to need one of these because I have the opposite – a bunch of friends who descend on me like a pack of wolves and pummel me like a politician in a live TV debate at the first whiff of weakness. 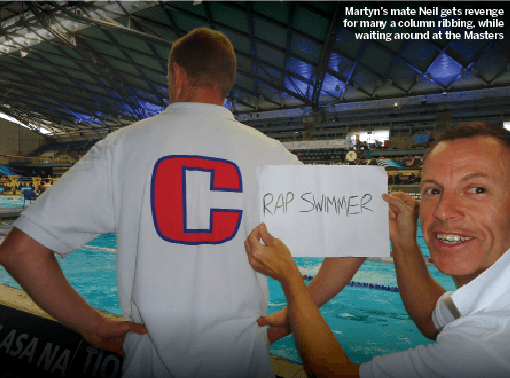 So, out of fear of their Facebook mockery to ‘MTFU’ (best to Google it…), and in my bid to prove them all wrong and drink soup made of their tears, I am underway. My start to the challenge has been just like a fairy tale – grim.

At the time of writing I’ve managed to knock out 215,900m in three months. I’ve also acquired a permanent stench of chlorine, a large patch of red skin on my shoulder where my chin rubs my poor-quality arm stroke, and I’ve done so many tumble turns that it’s left my testicles wonky.

I’m not sure if there are any lessons to be learned from this sorry state of affairs other than to watch the sky more closely for dread portents which might hint that my evil swimming coach has come up with yet another idea.

I suppose you could quite easily say, ‘Don’t say yes to stupid challenges’, but we both know that’s not going to happen. I’m a triathlete. It’s what we do.