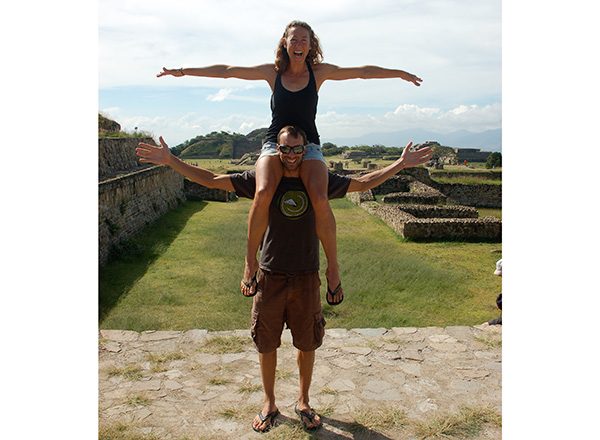 220 actually had a hand in bringing four-time Ironman world champion Chrissie Wellington together with former Ironman pro Tom Lowe, as they met at the 220 Awards in 2009. Over to Chrissie…

“I went to Club La Santa at the start of 2009 and saw this striking 6ft5in bloke wearing a similar sleeveless black Puffa jacket to me. We had a few jokes about it and then next day he messaged me on Facebook, just congratulating me for Kona and wishing me well with my training. I asked him if he was going to Sandown for the 220 Awards in a few weeks’ time, he was, so we arranged to meet. I was swamped during the show itself but at the end of the awards we met up and got on really well. But then we just kind of parted ways, and I left to go to my hotel. Feeling a bit down I told my friend Steph that I didn’t even give him my number. She then raced back upstairs and dragged Tom down saying that I wanted to say goodbye to him! It was a proper schoolgirl/schoolboy thing! So yep, we had our first kiss in the reception area of Sandown Park on 8 February 2019, just over 10 years ago!”

They now have a three-year-old daughter, Esme Grace, and live in Bristol.

The 2008 Olympic gold medallist Emma Snowsill recalled her first run-in with her now husband of five years to Slowtwitch: “I met Jan back in Richards Bay in 2006 at the first World Cup in South Africa. I remember this chatty guy with all the media. I was thinking, ‘Who is this upstart? I haven’t heard of you before?’ I didn’t really have an opportunity for a proper conversation with Jan until spring of 2010. I had never been one to talk a lot. But we had an immediate connection. I could talk to him about anything and everything. I was really interested in him but I thought, ‘Well, he lives on the other side of the world. That’s never going to work.’’ I went back to Europe that summer and I found myself wanting to spend time with him. And it just evolved.”

Married in 2013, the two Olympic gold medallists have two children together, Lucca Leo,3, and Sienna Sofia, 1. Emma retired in 2014, while Jan has hinted that he might hang up his tri-suit after the 2019 World Ironman Champs.

With Miranda a three-time Ironman world champion and O’Donnell a five-time top-10 finisher they’re a match made in Kona. They first met while receiving treatment for dehydration after a half-Ironman in Texas in 2008, before getting married in 2013 and welcoming daughter Isabelle to the world in August 2017.

Helen is one of the most decorated British female triathletes in history, while Marc also competed on the world circuit before becoming her coach. They’ve been together for 17 years, meeting when Helen was 17 and had just started doing triathlons.

“We were members of the same swimming club,” she recalls, “and I knew Marc was a triathlete, but I wasn’t really that interested in the sport. At the start of 2008 Marc had just had surgery and I’d been out with my own injury. So we decided that we were going to get married towards the end of the year – no matter what happened we’d have something to look forward to!”

Married in Florida in October 2008 they will welcome their second child to their family in May this year, to join Mali who arrived in August 2017.

Former Ironman world champion Greg Welch married fellow Ironman, and co-star of the famous Crawl, Sian, in 1993 and together have two teenage daughters. Greg now commentates at the Ironman Worlds, while Sian, who actually returned to Kona in 2017 to race, runs a non-profit foundation called Freedom to Live, which raises funds and awareness in order to provide a collegial-like living environment for people who have suffered spinal cord injuries.

“It was Utah in 1988 and I was on my way back to New Zealand to quit triathlon having become disillusioned with the sport and its demanding lifestyle,” Baker told Ironman. “The lift door opened and there was Scott. He asked me to breakfast. Things just went from there. Later I joined him and his friends in Boulder where triathlon had become a total lifestyle for them all. For the first time I learned to really enjoy the whole thing. I loved the feeling of being fit and it developed into a great way to make a living and to live my life.’’

The couple, who have two children and live in Christchurch, New Zealand, were inducted into the Ironman Hall of Fame in 2018.

Siri, the 2001 ITU world champion and respected tri coach, has been married to former pro Ironman Rebekah since 2014. They now both run Team Sirius Tri Club and the non-profit Believe Ranch and Rescue, which saves horses from abuse and extreme neglect at their ranch in Boulder, Colorado.

Olympian-turned-Ironman Jodie married Ironman pro James at the end of 2016, and had their first child Jack in November 2017.

Multiple world champion, Gomez met Kiwi Jenkins while training in Wanaka, New Zealand, at the beginning of 2014. Fittingly, they returned to near where they first met to tie the knot in December last year.

Lucy and Reece have been together since 2011, when they were both swimming for Hatfield SC. Lucy recalls: “On our first official date, Reece cooked me Mexican food (my favourite) and I ate way more than him! He knew I was a keeper after that. Turns out he has the biggest appetite I’ve ever seen (he’s won eating competitions) but he was too nervous to eat on our first date!”

Married in December last year, the pairing have built up a formidable athlete/coach team in their pursuit of that top Kona step.

These two top Olympic-distance athletes met on the ITU world circuit and got engaged at the Grand Canyon in August last year. Watch out for this formidable duo over the coming 18 months as they gear up for the Tokyo Olympics.

Another successful athlete/coaching partnership, both on and off the race course, and one that’s seen 33-year-old Vicky take bronze at the 2016 Rio Olympics and the 2018 ITU world title. Based together in Bath since early 2017, the next step is Tokyo qualification for the stellar duo.

As the 2013 world ITU champ Stanford told triathlon.org last year: “We both won the World U23s at Auckland 2012, but it wasn’t until the end of the 2013 season that we met, at a French Grand Prix race in Nice. We’ve been great friends ever since, always catching up at various races around the world over coffee or dinner. It wasn’t until 2016, though, that he plucked up the courage to make me his girlfriend. There’s some disagreement over our ‘first date’ but we’re pretty lucky that triathlon takes us to some amazing dating locations, and allows us to travel and experience the world together.”

A couple since 2008 when they were both in high school, Aussies Ashleigh and Josh are rare in that they race different disciplines – Ashleigh on the ITU circuit, Josh 70.3 and full Ironman – meaning long stints apart. Ashleigh, winner of the 2018 Gold Coast WTS Grand Final and 2016 Olympian, remembers “his best friend told me that Josh liked me. That’s how I found out, it didn’t come from Josh himself!”

Josh counters: “Ash claims she sent the first text message, which was a pretty big step for two shy teens! Thankfully it was still in the pre-smartphone days, but because I was in Brisbane and Ash was on the Gold Coast, we texted and called each other a lot, and still do I guess!”

Like many of our couples on this list, the ITU circuit brought American Kirsten and Canadian Matt together. This top pairing have been dating since 2016, and are both gearing up for what would be their first Olympic selection.

“I met Katie at a World Cup in Tiszaújváros, Hungry,” said Tommy in 2017 to triathlon.org. “I wasn’t planning on going to the after party, but my roommate (Joe Maloy) convinced me it was a party I couldn’t miss. I ended up going and found myself hanging out with Katie. We started to talk, talked all night and never stopped. We started dating a month later, got engaged after a year, and got married three months after we got engaged! We’ve been married for a little over three years now and train and travel together full time. The longest we’ve been apart in the last two years is seven days.”

Yorkshire pair Hall and Buckingham met in 2011 at the European Duathlon Champs in Limerick. Lucy is one of the ITU’s fastest swimmers, while Mark trains and races with the Brownlee brothers on the 70.3 circ

10 signs that you are part of a true triathlon couple

10 reasons why you should always, without exception, date a triathlete…

10 reasons why you should never, ever, date a triathlete…