After a lovely week in Mallorca with Wifey, Lynette Porter and Ross Hale, cycling 500km in the hills and running in the Ultra Mallorca Serra de Tramuntana (my first 100km in which I came 33rd) it was back to grey and damp Blighty – brrrr.

My focus during June is open-water swimming and cycling in preparation for the  Celtman XTRI on 6th July. The CXTRI is a small, friendly and hugely rewarding long-distance triathlon based in one of the most beautiful parts of the Scottish Highlands. The swim in Loch Sheildaig is going to be chilly (snow has only recently disappeared from the surrounding mountains), but the water is crystal clear and full of sea life – so lots to look at and take your mind off the temperature.

Swimming at Vobster Quay started, stutteringly, at the beginning of May. The cold start to the year suppressed the water temperature to below 10-degrees and made it difficult to do any more than 2km. Now I’m wearing a Fourth Element thermal vest, thermal socks, two caps and swimming in the afternoon, so have pushed distances up to 3.5km

I’ve been getting out early on the bike at the weekends to cycle 120km to 200km routes around Somerset, Dorset and Wiltshire with 2,000m+ of ascent (CXTRI has over 2,000m).  So far I’ve had five fantastic early rides over to The Gospel Pass, near Hay-on-Wye, down to Lulworth Cove on the south coast and large circular routes around the Mendips and West Wilts Downs. 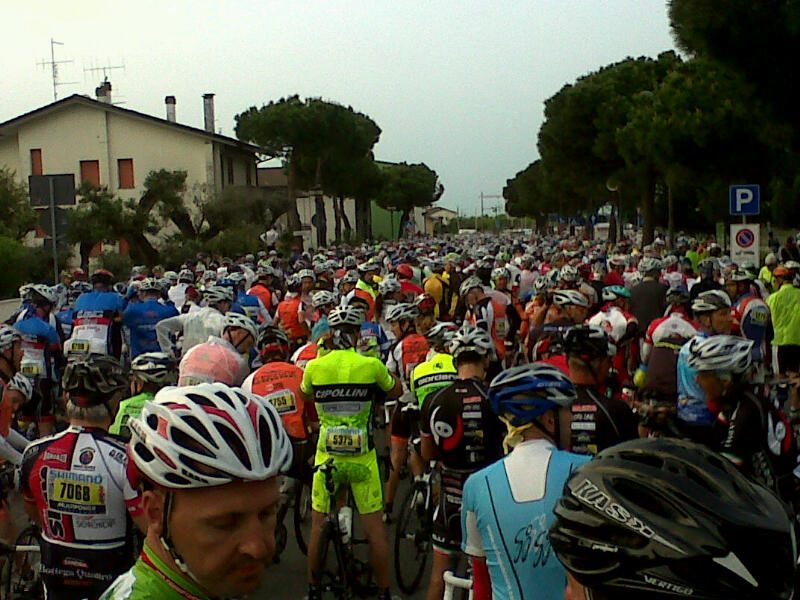 Due to my knee strain and a significant amount of work-related travel since early May, it has been difficult to keep to a proper training schedule, although I have been ramping up the cycling and the number of laps swum in the chilly Vobster Quay.

During the middle of May, with 11 other members of Frome Triathlon Club, I travelled to Cesenatico in Italy for our annual triathlon training camp. The hotel is fabulously located, only two minutes walk from the sea, with wooded run trails and beautiful cycling routes throughout the region.

The day after our arrival, with 50 others from the hotel, we went on Dante’s annual ride, which included a fabulous lunch and wine-tasting stop in the middle! Later during the week, six of us took part in the Novi Colli sportive, an incredible event with 14,000 participants. Along with Nichola McAlpine and Anne Huggett from FTC, I cycled the 131km route with over 8,000 feet of climbing. The views from the tops of each climb were breathtaking! As were the chat up lines at the feed stations….

Towards the end of the week, I had resumed running again and have continued to build on this, using kinesio tape to help support my knee. Last week I was back in Kyiv, Ukraine for work, but I kept the Italian theme going by running on four successive mornings with an Italian Colonel! Even he was rather shaken by the stray dogs that take very unkindly to runners.

I’m travelling again every week this month, but will fit in as much running and swimming training as possible – 13 weeks until OtillO!