June was exceedingly busy with an inordinate amount of air travel, primarily due to work. Where possible I have tried to stick to training schedule, but it’s not been easy. After work in London and then Oslo, I managed to have a much needed holiday with my best pal in the beautiful resort of Kas in Turkey.  Staying at a fabulous boutique hotel on a craggy cliff, the views were stunning.

Immediately spying a little island approximately half a mile offshore, I had my target for the week. After speaking to a fellow triathlete called Sarah, I realised that the currents weren’t too strong, but she advised me to wear a bright swim cap so as not to be mown down by the various watercraft passing by.  So over the period of 6 days, I managed to notch up a healthy 17 miles of swimming, which offset the numerous cocktails and glasses of wine!

Since then, I have been testing out cut down wetsuit/running combos with the first proper trial at the fabulous 4th July Aquathlon at Vobster where I had my own special category: 750m swim, 5k run, 750m swim, 5k run, 750m swim. This was all done in my shortened wetsuit, just sliding into trainers for the run. On the advice of Rebecca and Andrew Bole whom I’d met in Cesenatico in May, I used the bottom part of the wetsuit legs as calf guards, which they had done when they raced OtillO in 2011. All in all, not too bad, but the running felt like resistance training – more trials necessary!

On 14 July I entered the inaugural Orchardleigh triathlon, a fabulous event, albeit a bit of a scorcher. Following a non-wetsuit swim where I set a massive PB, my legs suffered on the very hilly bike course due to a dearth of cycling and a very hilly run. But it was great fun. This weekend coming, Ro and I are going to attempt our first long training session together, again swimming laps of Vobster, interspersed by different length runs. It’s going to be interesting!! 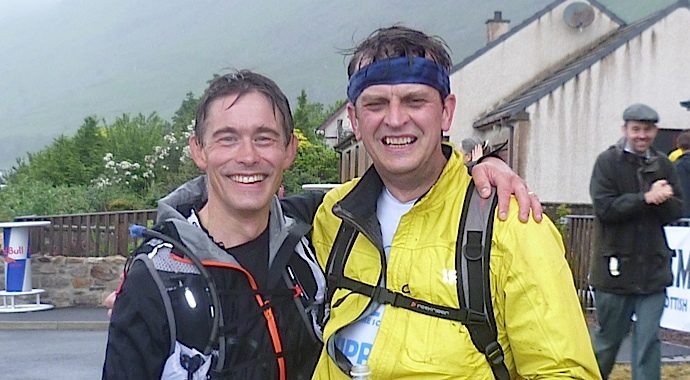 Swimming 3km to 4km circuits of Vobster Quay, Somerset in June was very pleasant. The water temperature was up to 15 degrees and a regular and steady afternoon wind provided the choppy conditions I thought would prepare me for the OtillO and the Celtman XTRI swim across, Loch Shieldaig. Yeah, right.

The CXTRI start has a beautiful setting and with the sun rising over Beinn Eighe at 5am onto a relatively sheltered bay I was looking forward to a gentle one hour-ish introduction to the race. However, after a slow, but steady start I suddenly had to contend with a tide, a 60kph headwind, only being able to breath on my downwind side, stirred up mirky choppy water, and a 10 to 11 degree water temperature – yuck.

I was also blown off course, away from the shelter of the islands, the group I was with and eventually exited Loch Shieldaig after 1:20hrs shaken, stirred and in 70th place. However I wasn’t cold. Wearing Fourth Element inner socks and thermal vest together with Blueseventy neoprene outer socks, neoprene hat and Reaction wetsuit stopped me loosing too much heat and energy.

Things got better after that and I moved through the field during the bike and run stages finishing, with the help of Colin Jacobs my support runner, in 13:57hrs and 33rd place.

Jackie and I have struck a deal. If she pulls me on the swim sections of the OtillO I’ll pull her on the run sections.

Next up? A mock OtillO at Vobster Quay with Jackie – yep swimming with shoes, bungy cord, paddles and cropped wetsuits.

Keep an eye on the 220 website for more from Roland and Jackie as they prepare for their Swedish challenge. For more on OtillO, head to www.otillo.se