Red Bull Neptunes Steps is claimed to be the toughest open water swim race in the UK. The event challenges participants to swim 420 meters upstream in a canal in Glasgow – with seven lochs to climb up as they go. If this was not hard enough, 2018 saw water temperatures as low as 3 degrees due to snow melt. A true test of speed, strength and determination for any hardened athlete.

When 220 asked me to report on the event I jumped at the chance in my typical ‘say yes then think about it later’ mentality. And when I said yes I was just back in from a nice relaxed ice swim in my local loch in Perthshire, so the thought of the cold water was not too off-putting. I felt reasonably well prepared with my 6k a week pool swimming and at least once a week dip in loch or North Sea. Plus I weight train and generally keep myself active.

However…. As I found out on the day – trying to combine all of the above while essentially battling a waterfall is a totally different kettle of fish.I am not the fastest swimmer. My forte is endurance so I can keep a nice steady pace for a good few hours quite happily, but short sprints were something totally different.

The ladies around me set off strongly and the combination of the cold and trying to swim fast soon took my breath away. By the time I reached the first loch obstacle there were about eight other ladies hanging on to the rope netting trying to pull themselves up against the torrent of the water, and there was no space for me. After a few minutes of treading water I found some space and had a go. It took me a few attempts, but eventually I managed to haul myself up high enough to hook a foot in the net and scramble my way up and over.

The next few lochs saw similar challenges. Each obstacle further sapped the energy out of me and my hands got colder and colder until I could no longer feel them or whatever I was trying to use to pull myself up. At nearly 300m along the course I saw the red flags waving and knew that my race was over (there was a very sensible cut off of 15 minutes due to the cold) As I looked back I saw a couple of other ladies swimming to the side and assumed I was one of a few who had not managed to complete the full course. However I later found out that over half of the wave had retied early due to exhaustion and the affects of the cold water. (I didn’t feel quite so bad about my attempt after that).

What an experience; this was one of the most physically hardest 15 minutes of my life and my respect for the men and women who completed the event was sky high. And I did actually really enjoy myself. The crew helping get people out at the end even commented that I was one of the only people coming out grinning rather than grimacing! 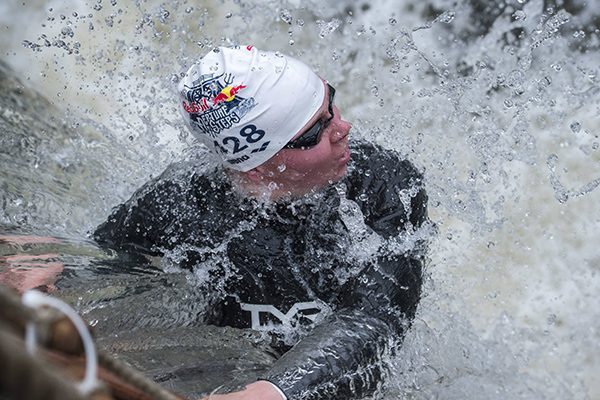 I had a quick chat afterwards with the awesome Jennifer Davis (pictured above) – the ladies winner for the past 3 years – and asked some training advice for anyone thinking of doing the event. She’s a water polo player and said that the stop-start nature of the sport really helps with the swim and obstacle combinations. She suggested replicating this in training by swimming a couple of lengths in the pool then jumping out and doing some pushups and upper body work before jumping back in and sprinting another couple of lengths.

However, while chatting to the winning male was Dan Jones, an international 200m freestyle swimmer from Wales, he casually mentioned that this was only his second time in a wetsuit and his first open water swim so he didn’t really have too much advice. An amazing achievement in the conditions!
I would definitely recommend this event to anyone who wishes to really challenge themselves before the season starts. It’s a great incentive to keep the fitness up over winter and to keep cold water acclimatisation when so many triathletes hide inside in the warmth of the pool.

Just do not underestimate how hard 15 minutes can be and take on Jennifer’s great advice for your training plan.

Tempted to have a go? Watch highlights from the 2017 race below and find out more at red-bull-neptune-steps-uk