Tim Heming files from Israel for 220 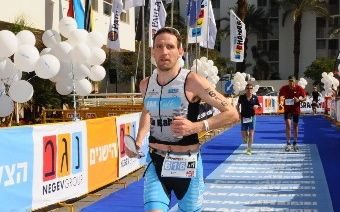 Warned of freezing temperatures and 60mph crosswinds in the desert mountains, it was time to wrap up warm for Israman 2014 (writes Tim Heming in Israel).

What transpired, though, was 220 lying prostrate in the ice bath/paddling pool filled with ice at the finish line as its pasty British complexion melted in the midday sun.

On no doubt one of the easiest days in its 14-year history, Israman still proved a worthy adversary. Not that the half distance gave British pro Alice Hector too much trouble. The Windsor athlete clocked 5:00:46 to take victory on the female side, with 220 chugging in over an hour behind in 6:08:05.

The Red Sea start saw the majority of the 1,300 triathletes hit the water for the half distance 15 minutes  after the full Israman starters. It was predictably crowded with the strobe lighting on the buoys mixing with lights on various sea vessels to make sighting a little tricky.

Once out of the water, the bike started with a 12km climb straight out of transition, leaving the party town of Eilat behind and heading up into the Negev desert with the Egyptian border just a few metres away.

At the top of this climb the triathletes found T2, but not before negotiating another 78kms of rolling desert terrain on an out and back section. 220 was with the masses again, having been spat out the back of the swim and catching a few spinning up the mountain.

The road bike, kindly lent by the organisers, did a fine job on the climbs but struggled to stay in touch on the flatter sections as the carbon behemoths whirred past (I’m sticking to that excuse), so T2 was a welcome if confusing sight given 220’s limited grasp of Hebrew.

The run is possibly unique in long distance triathlon in that it’s akin to the downhill part of fell running for the first 12km. It was a real quad-buster as we descended from the desert and the pace slowed dramatically once back into Eilat for the finish along the coastline.

The finish chute provides as much carnival as any long distance tri you’ll find anywhere, and reminds you quite why you enter these things in the first place. The adjacent ice bath is taking care of the rest, so I’d better wrap this report up before the rest of it melts and my laptop suffers.

Age-group blog: the road to Bolton