To a refined triathlete who has all the gear and their raceday prep down to a tee, the idea of a race that involves crawling, throwing yourself over 8ft walls and trying to swim in your shoes might seem a little ad-hoc to say the least; however it can’t be ignored that Obstacle Course Racing (OCR) has had a meteoric rise in popularity in the last decade, and rivals triathlon as one of the world’s fastest growing sports.

To see what all the fuss is about, I signed up for the London River Rat Race, a 10km course with 35 obstacles starting in London’s Excel Centre and meandering around the docks of the River Thames. As a first-time obstacle course racer, I decided a water-themed ‘urban’ assault course might be preferable to anything that involves mud as well. Here I would literally be testing the water…

I arrived at the Excel to find that numerous other events were taking place in the various exhibition halls – this made for an unusual trip to the loos pre-race, where lycra-clad Rat-Racers were queuing up next to business people and wedding guests dressed up to the nines, with each group looking equally as puzzled at the sight of one another.

I arrived at the hall that was the venue of the Rat Race, where the start and finish areas were positioned inside. The atmosphere was jovial, and there were all the elaborate costumes and charity fundraising participants you would expect to see at a big city running event. I tried to clock some serious looking athletes to gather if I would need any gear I may have forgotten, however it was noticeable how most participants were simply in gym gear. This made for a very inclusive environment, as there is little to set anyone apart due to the organisers providing most of the equipment. I even felt a little too high-tech if anything in my tri-shorts and racing flats! 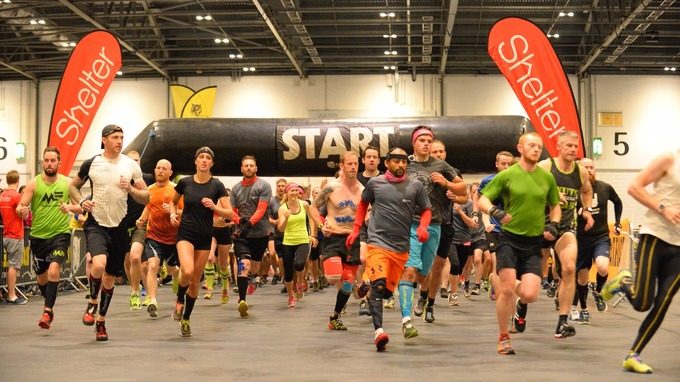 The race goes off in wave starts and I was in Wave 5, meaning I managed to get a glimpse of 1st and 2nd across the line in Wave 1 (who happened to come 1st and 2nd overall). I gulped as I saw the winner career over a final 8ft wooden fence like it was a hurdle and cross the line in just 50mins.

It began with a twisting run around the hall, and resembled a normal running race for a couple of minutes at least – the first test came just before the exit onto the waterfront, as I tackled a succession of scrambled metal barriers. Some wiser competitors simply picked a path and ran along the top of them like beams, while I laboriously hopped over each one wishing I’d had the same idea. 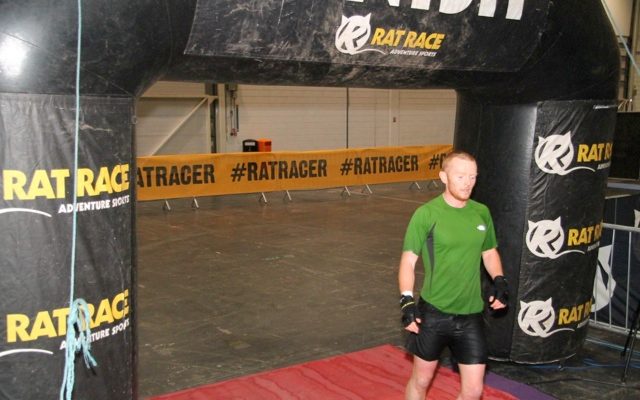 After about half a mile of running the first water-based tests beckoned – first up was jumping through part-submerged inflatables, then trying to leap across some floating trampolines. I just about kept my footing and soldiered on.

I established a familiar pattern of overtaking those around me on the run sections and losing ground whenever it came to an obstacle, none more so than the part I was dreading most… kayaking!

My main (and very big) problem with the 500-metre kayak loop was that I had never actually kayaked alone before! I approached the boat and was handed a paddle by a steward, and didn’t really consider that I didn’t know what to do until I was supposed to begin. I took a few seconds to observe other competitors paddling with ease, and after a few minutes of bobbing around, I battled back to the decking in at least double the time it took most of the others who began around the same time. I made an extra effort to run with some finesse after the kayaking catastrophe, made difficult because my legs were stiff from being on the boat for so long.

Next up were a set of monkey bars positioned over the water – the sensible amongst us wore grippy gloves to help them across, however my hands were already slipping off after the first two swings. I attempted to launch myself at the pontoon on the other side, missed and nearly took out a fellow competitor then sheepishly hauled myself out of the water.

Highlights in the second half of the race included a 20ft jump into the river, which was thrilling for some of us and too much for others who chose to avoid it. I negotiated more walls, balance beams and up-and-over blocks and approached my last water obstacle, another succession of jumps through inflatable hoops. For any sections where we had to swim this had to be done in shoes, an odd experience but an unorthodox strength-builder of sorts because it was so hard to kick! 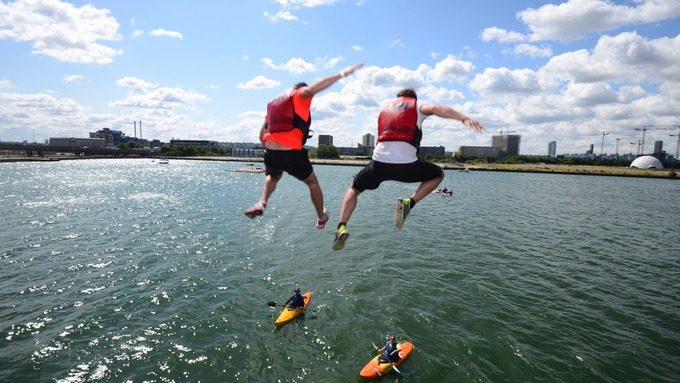 As there was no indication on the course it was hard to tell when you were nearing the finish line – any sense of relief was quickly dismissed at the sight of two huge walls to climb over just metres from the finish chute – I took the first and didn’t have the energy to take the second one without another run-up – after which a guy who I’d played cat-and-mouse with judged it just right and pipped me to the line.

A sigh of relief

I finished in 58 minutes, a little quicker than I had guesstimated but ultimately pleased to have (almost) completed all the obstacles. The camaraderie was excellent, and I saw many competitors abandon their chance to finish in style by helping others over the last wall instead. For me the effort level for this 10km course fell somewhere in between a sprint and Olympic distance tri, which would suggest the longer muddy OCR events would require a very good level of fitness to finish them without your race ending in the medical tent!

Overall I thoroughly enjoyed my own OCR experience. The spirit between competitors was fantastic and there’s plenty to keep you entertained around the course. You’re forced to think fast which is useful for any sport where the situation and conditions can be changeable, and what’s more you don’t need to spend the earth to be competitive in an OCR event.

Although it hasn’t converted me away from triathlon by any means, I would recommend multisport’s most eccentric cousin to any triathlete who wants to mix up their race season, improve anticipation or just try something different.

You can sign up for a Rat Race event to test your metal at http://ratrace.com. Is obstacle course racing for you, or are you strictly a tri-er only? Let us know in the comments!