Game on at the Perranporth Extreme Surf Triathlon 2015 (blog)

It is with some trepidation that I jump out of bed on Sunday morning 19th September and draw back the bedroom curtains. The sun streams in through the window and I mutter an involuntary thanks to the gods of triathlon as I gaze at the golden sands of Perranporth, stretched out ahead of me, open and inviting.

I don’t care much about the sun though…  What I really care about is that the shifting, swelling, energy-sapping, sinus-filling, wind-flecked maelstrom presented by the Atlantic Ocean yesterday has been replaced by something far more benign. Gentle waves lap the shore and the humiliating prospect of being rescued by a 14-year-old on a surf ski is replaced by a queasy optimism.

I moved to Perranporth in June 2015 with my wife Sarah, and two young children Lucy (3) and Emily (nearly 2). My wife and children effortlessly fell into the Cornish lifestyle, almost overnight they were golden brown, with salt streaked blonde hair and flipflop tan lines. I on the other hand was pasty, unfit and overweight. I needed a challenge, and the Perranporth Extreme Surf Triathlon seemed to fit the bill perfectly.

I had two months to train, I could cycle the commute to my new job in Redruth, and run along the beach in the evenings. The weight started to shift as I continued to hit the pool, and before I knew it I was heading off down to the beach to practice my sea swimming ahead of the big day…. Boom!…. I stagger back to shore and retched up some of the seawater I had just ingested. The remainder it seemed would remain in my sinuses for months to come, only to leak out every time I tied my shoelaces. Sea swimming is HARD… and extreme surf sea swimming is ridiculously so!

Suddenly the day arrives, I’m fit, lean(ish) and in the pool at least I can swim. Any attempt of sea swimming has been frustrated by the swell, and I struggle for any kind on rhythm, all but for one memorable occasion where I had sailed out to sea with long powerful strokes and minimal effort. I thought had cracked it until it transpired I was in a rip and the current was simply washing me out to into the Atlantic. Today though the swell has finally subsided to something manageable, and it’s game on!

Perranporth has turned out in droves, transition is buzzing and I’m surprised by the number of bikes racked, with over 200 entrants the hope of a top-50 finish was diminishing rapidly, and I instruct my wife to expect me in 2:45hrs. Lucy gazes solemnly up at Daddy, clutching a homemade card board banner that says, ‘Go Daddy!’. Emily just giggled at the sight of Daddy in a wetsuit, and keeps trying to rip off my swim hat. I stride off to the start line. 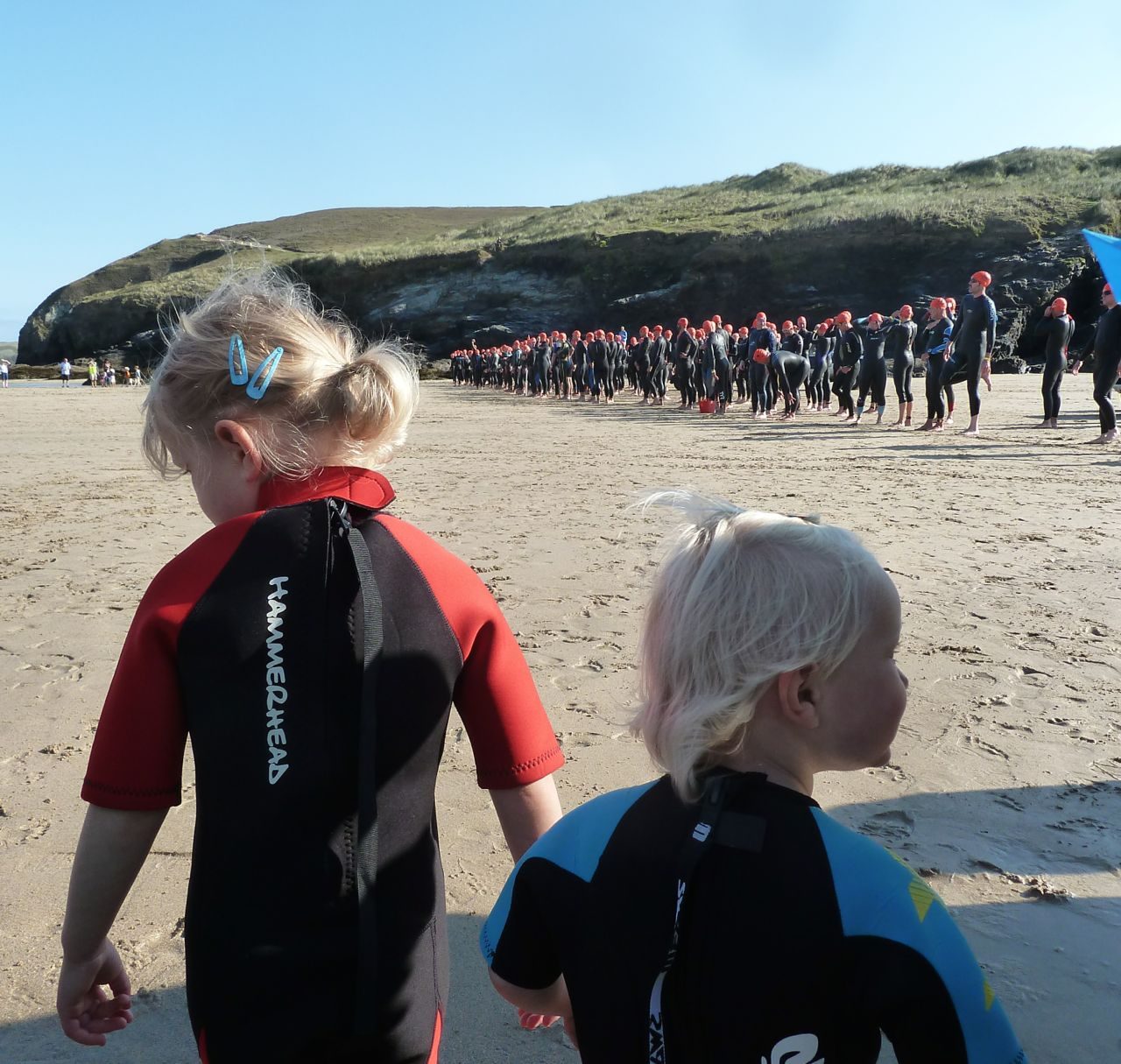 Lining up to start the Perranporth Extreme Surf Triathlon

The start is on the beach, and we all charge off into the water at the starter’s whistle – it’s all a bit Baywatch until I get a little carried away with the moment and duck-dive into a sand bank. I recover my posture, and my goggles, and head out to sea. The plan is to wade as far as possible to save energy, but I’m soon swimming for the first turn buoy.

The water is cool and clear, and I can chart my progress through the water by the sand ripples of the floor. The swell is manageable and soon I’m turning left up the coast and heading for Chapel Rock and the swim exit. I stagger from the water to the cheers of the crowd and head up the lung bursting, neoprene chafing beach run back to transition.

Soon I’m on the bike. I’m elated that the swim is over, and actually went far better that I could have hoped, but the bike is my favoured disciple, and I have been commuting this bike course for the preceding two months. I’m in slightly unchartered territory however, the unexpectedly strong swim has put me further up the field than I was accustomed.

Normally in triathlon if you are a rubbish swimmer like me, you are far enough back on the bike you can spend the whole bike leg making up places and convincing yourself you are some kind of fat Fabian Cancellara. Today however I’m acutely aware there are plenty of strong bikers around me, and I’m careful not to redline it.

I know my ‘local’ knowledge of these roads will pay some dividends, and I sit back on St Georges Hill and slipped into my smallest gear as soon as the gradient kicked. I threaten to lose my breakfast up this hill most mornings, and I smirked as other riders surged past, out of the saddle, only to be caught by the second gradient kick near the crest.

The bike course is brilliant, a dual lap course along the coastal back roads, with some sharp climbs and some long flowing descents. I had questioned whether to fit aero bars, and decided to go with it in the end. I was glad I did, as I settled into what I fondly imagined to be an aero tuck and tried to make some more places.

Each bike lap starts and finishes in Perranporth, and the crowds are out and enjoying the spectacle. I caught a glance at my family as I swoop down the fast, tricky descent at the end of the first lap and pose hard, sucking in my gut, hoping my wife is taking a photo. With ‘Go Daddy Go!’ ringing in my ears, I set off on the second lap.

Off come the wheels

The run is where the wheels fall off! The triathlon run is not particularly pleasant in my experience, and traditionally it is where I pay the price for some exuberance on the bike. However, this run coarse is a horror show, covering 7.5km of admittedly one of the most beautiful beaches you will ever see, with endless soft sand interspersed with brutal climbs up the cliffs and down the dunes.

I sail out of transition, past my family once again, who are now settled on the beach, playing in rockpools and scoffing ice cream. I develop a stitch almost immediately as I set off along the first section of energy sapping soft sand, and I’m still paying the price for my poor breathing technique during the swim.

I had gasped so much air in the sea that some has become trapped in my stomach and is now sitting there stubbornly, competing with my stitch to see what could make me more miserable as I set off on the first climb up and over the coastal path. I suck down a gel as I head for the turnaround mark, and things settle slightly as I’m at least heading for home. The second coastal climb is even higher than the first, but the phenomenal views of the coast give me some respite to the pain.

I spot another runner who I racked my bike next to, and I decide to try and race him home. Some sugar had finally worked its way into my bloodstream, and as we crest the hill, I put on a weak surge to go past him. I flap my way down the dunes, and am dismayed to find another section of soft sand to negotiate to the finish.

Convinced my rival is looking for any sign of weakness to pounce and gazump me at the line, I surge again and sprint for the line… Turns out the other chap had given up ages ago and I’m all alone as I cross the finish, but I’m surprised and delighted to see a finishing time of 2:34.00 on the board. 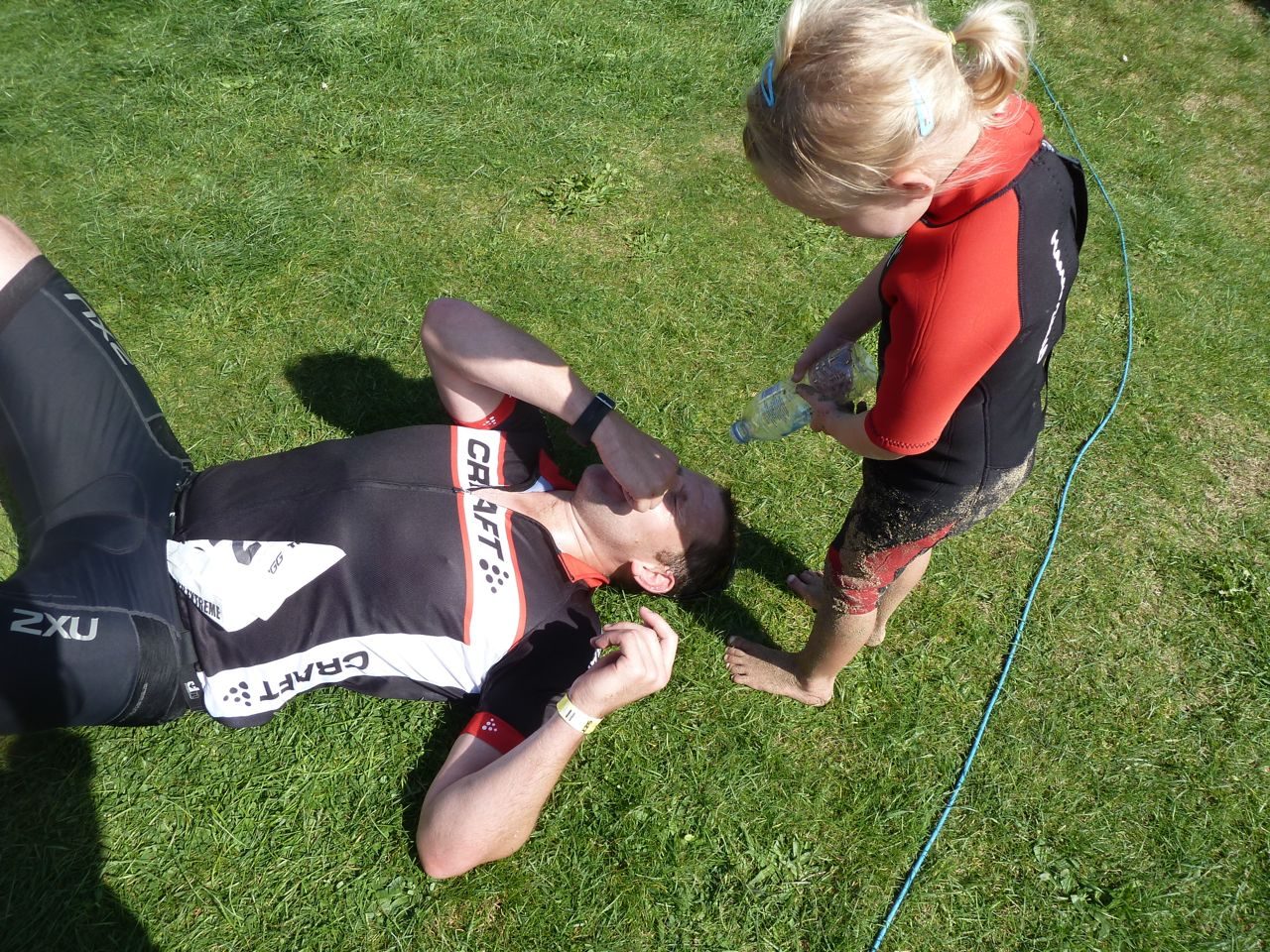 Perranporth Extreme Surf Triathlon anyone? This is a fantastic event, a well organised and hugely supported by the town and Perranporth Surf Lifesavers. A real challenge, not to be underestimated, and a real change from most open water or pool based events. Look out for me next year – I’ll be on the beach, scoffing an ice cream!