Racing the fifth edition of the Spetsathlon event was 220 reader Jamie Freeland. Here’s his take on the Oly-distance event in the Saronic Gulf…

Spetsathlon is the latest edition to the calendar of sporting event held on the beautiful Greek island of Spetses, a couple of hours south-east of Athens. Now in its fifth year, it’s an event that draws more than 800 triathletes from all over Europe to the swim and bike races on the Saturday, and sprint and endurance distance triathlons the following day.

I had done a lot of ‘growing up’ on Spetses in the late 1990s, and this year had joined a Lycra clad reunion with some Greek friends from those days who were now as obsessed with the wonderful world of triathlon as I am.

Pre-event nerves and sunburn from a recce round the bike course meant sleep was in short supply (as it had been in our nightclubbing days) the night before the race. A civilised mass start time of 10am softened the blow, and the town was already gripped by triathlon fever as we made our way to the event village on race morning.

Shouts of “kalotaxidi (good travels)” accompanied us all the way down from transition to the pebbly beach, and with camera drones hovering overhead, the countdown reached zero and we were off with a shallow beach start leading to a flat calm deep blue sea.

Beyond the yacht-festooned jetty, a moderate swell broke up the field whereby I sensibly hung back (got left behind…) by the leading pack, but found some friendly feet to draft off round the 1,500m swim, experiencing only one real mishap when I torpedoed straight into a startled frogman who was presumably part of the safety team.

T1 was hastened along by the PA announcer shouting “Go Jimmy English!” as I hauled on a bike top to cover my fast reddening neck and shoulders, then it was off for a 50km bike leg consisting of two laps round the island. The suffering of seven tough climbs leading up to the Northern part of the island was offset by the springtime island scenery, and the glittering waters of the Saronic Gulf beyond. I was happy with a negative bike split on the surprisingly good road surfaces, and felt confident coming out of T2 (no shouting this time) for the 10km run around the familiar cobbled streets. 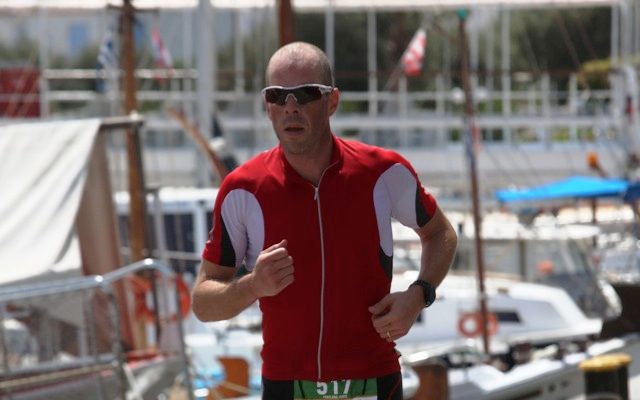 The course links the new and old ports of Spetses town, and with cafes and tavernas lining virtually the entire route the level of support was as warm as the sun now beating down. My resultant mood of euphoria was cut short however as cramp gripped both thighs in a vice halfway through the first lap, and as I gurned my way past startled waiters I found myself desperately trying to remember the Greek words for ‘salt please!’

Sure enough, on the way back, one good Samaritan was waiting for me with a napkin full of the stuff, which he handed over with cries of “Ela! Keep running my friend.” Ignoring the strong urge to add an order of calamari, I experimentally dipped my tongue in to the salt mound, and with the cramp finally receding enjoyed a final high-fiving finish in front of the magnificent Hotel Posidonio.

My endurance distance race was won by the veteran Greek triathlete Vassilis Krommidas (who still holds the 8hr 55min record for the 18-24 age group at Kona), while I slotted into mid-table respectability with a time of 3:13hrs on this testing course. Overall the organisation, location and friendliness of the event is simply stunning, and all for I really can’t recommend it highly enough for those looking for unique triathlon experience.

Oh, and for any fans of the film Mamma Mia, this is definitely the race for you!