Jumping in at the deep end. Yep, that pretty much sums up my decision to go race the big girls at the Ironman 70.3 World Champs in Mont Tremblant, Canada.

I’m not overly scientific with my training or racing but if I was this would be considered an ‘A race’. This was my focus, the place I let my head drift to during the sweatiest of reps!

My preparation for the race went well, definitely no complaints there. I absolutely nailed some key sessions reaching some paces I never thought possible. High fives were not in short supply.

It’s not often you improve in all three disciplines at the same time, but I think I did it. I avoided the likely threat of the taper cold and arrived in Mont Tremblant ready to dive in. OK, possibly not dive. More like jump, fall, and stumble from the shallow water beach start. 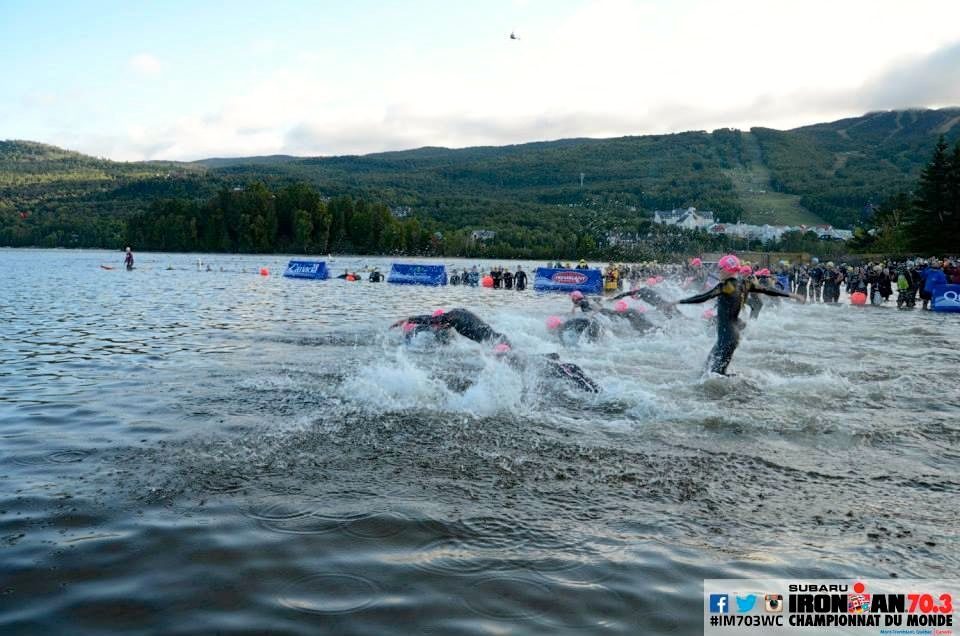 It was a separate pro female start. My experience of ‘ladies only’ is usually one of gentle mannered and chatty atmospheres, baby showers or high tea. No? Not here, not today.

Put thirty five of the world’s top female triathletes on a beach and throw them into the water while setting off fireworks and an overhead jet and you’ve got adrenaline filled whitewater chaos. It was definitely my toughest swim, the nails were out and the fight for the nearest toe was quite intense. But all in all a good swim, coming out the water with some top girls. 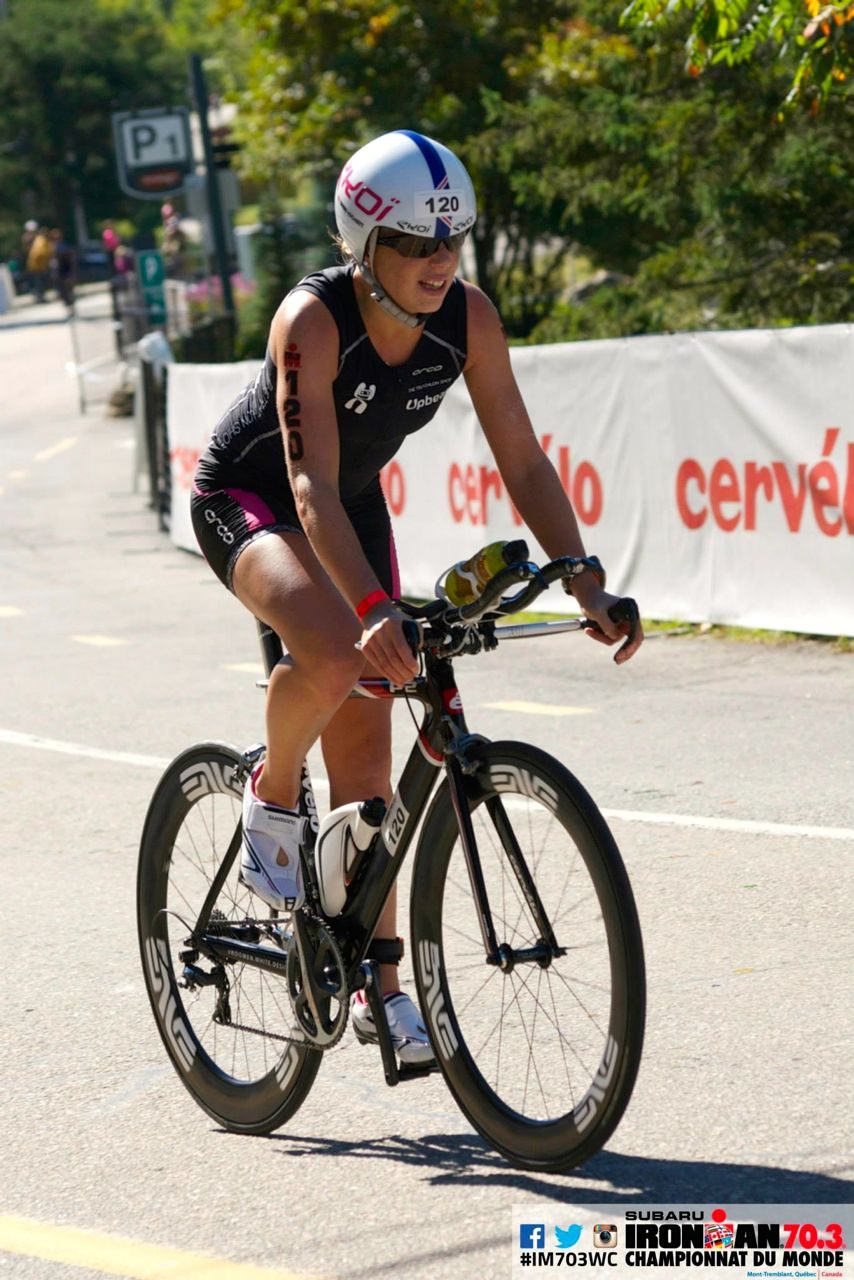 The beginning of the bike was far from pleasant, a big pack coming out of the water meant a big bike bunch early on, all fighting to keep their 12m gap without getting gapped. Ten or so girls all jostling for draft-legal position, meant that you could easily find yourself 200m off the front and unable to react to any moves. There’s not cutting in between the positions as the gap is never any more than the 12m draft zone and the draft buster was strictly enforcing the rules.

I made the classic mistake of underestimating the pace and making a go for the front, and once you commit, there’s no going back. I probably spent 2min all-out on this fateful manoeuvre and got completely knackered once on the front, where my aspirations of a break-away quickly evaporated. A bit of lactic acid and logic took over and I decided sitting in with the pack until about 50-60km was probably a wiser decision considering the super bikers among the group. 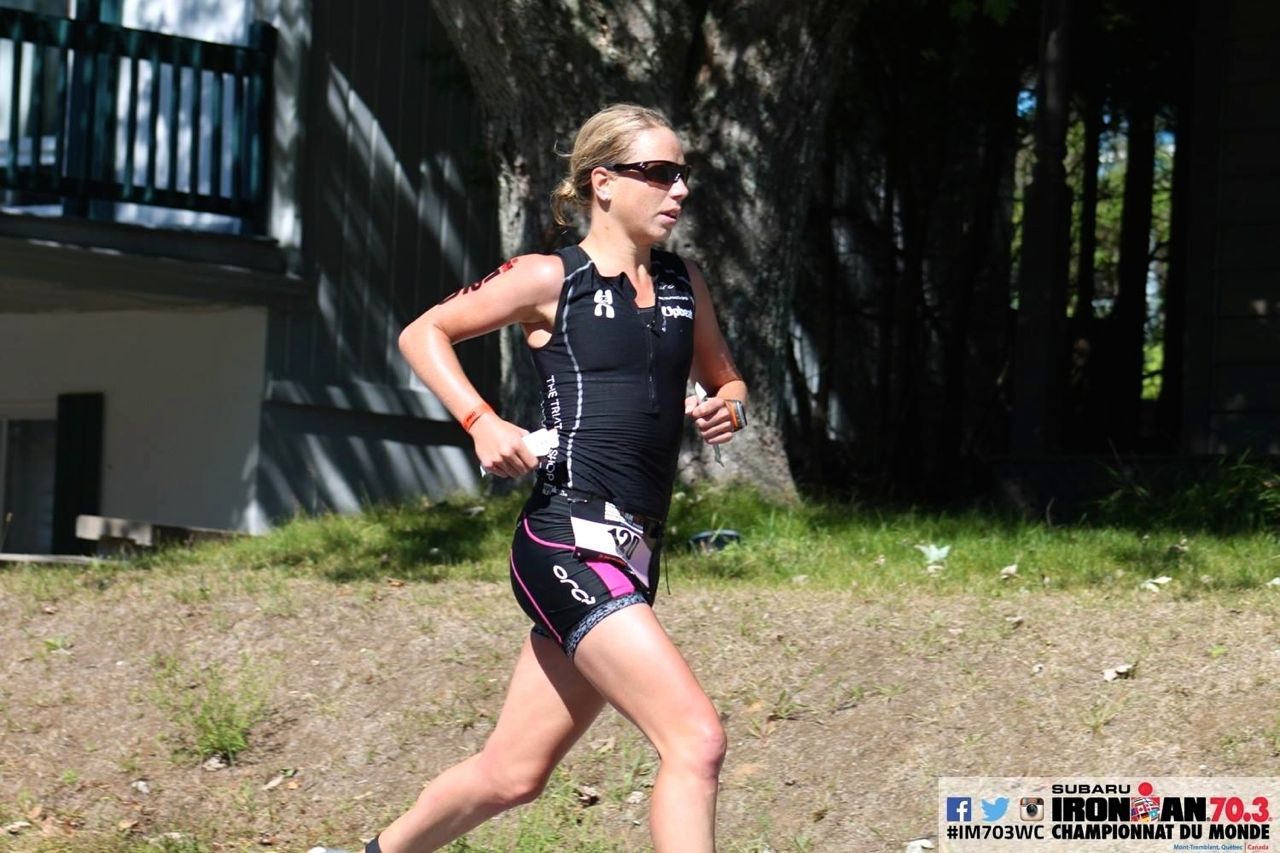 On to my favourite bit, the run. Definitely one of the hilliest run courses out there I ran out of transition with Heather Jackson (second last year) in 18th place. Time to do some work, I ran through the field making good progress. The second lap became so congested that I had no idea what position I was in, I just tried to keep the pressure on.

Although it’s my best discipline, my run is probably still my most variable. I still feel like I’m getting to grips with running a half marathon off the bike. Some races I crack it, some races not. I had a good run, but if you gave me the chance I would run it again.

I’m sure most people would change something about their race? Finishing 12th (second Brit, just ahead of Cat Morrison) was a good result – I would have liked to come home with a top ten, but less than a minute off tenth and 6mins off fourth leaves me with plenty of motivation. Lots to work on over winter, including mastering the art of ITU transitions: yes, that’s right, I am the only pro to run through transition in my bike shoes!.

So in summary, I jumped into the deep end…Fully submerged, yes. Drowning, no. Just pushed my limits a little further, I’d definitely recommend it.

Next bit of madness? I always said I wouldn’t do a World Championships or an Ironman without at least going part-time. So after going part-time in May and racing the World Champs last week there’s only one thing left for the season. Keep an eye out for me next month at Ironman Barcelona, I’m just hoping doubling the distance doesn’t mean doubling the suffering. To say I’m terrified is an understatement!

Were you racing at Mont Tremblant? Let us know in the comments below!