My entry to IM Frankfurt was made in a rush of blood after a fairly dramatic DNF in Zurich last July. I won’t bore you with the details but it ended with me in the medical tent, after just the swim, coughing up blood and my wife being extremely worried about me for a few days! Revenge on the distance was the only way to settle my conscience.

In 2010 my brother-in-law did IM Frankfurt in 2010 and asked me if I would do Wiesbaden 70.3 the year after. At the time I was playing a lot of basketball and a switch to any kind of endurance sport was a complete change for me. As a fitness professional it should have been something I was quite capable of doing – and I did, not a spectacular time but I got my finisher’s medal.

Two more summers of racing various distances with increasingly better results and getting to know my new sport, I even got my BTF coaching license, I took the plunge and entered the long one, it was perfect timing, now or never as I had got married over the winter and ‘life’ would soon get in the way!

IM Zurich was to be my race…. Hold on, no; fail – disappointment – anger – frustration – the plan hadn’t worked!

After a couple of weeks of moping around eventually my wife Inga suggested I do Frankfurt this summer (2014), we spoke about ‘our family plans’ and realised it could all happen around the same time… As it turned out it would be around the same time… Our first child would be due on 22 June and race day was 6 July.

Now one thing I haven’t mentioned is that Inga is from Frankfurt, where her family still live. Conveniently their house is sandwiched between two parts of the bike course, perfect for practicing the course before the race. We had always been keen on having the birth in Frankfurt so Mum could be with mother-in-law, and as father-in-law is a Doctor it wouldn’t hurt him being around.

So we came up with this elaborate plan to get a very pregnant Inga to Germany well before the birth, along with my race bike. Then I would fly over at weekends prior to the due date to be with her and bump – and train of course – llowing me to work during the week. I was then due to drive over to Frankfurt to be with Inga on the evening of the 19th, with the last of my kit and we’d have the car for the IM and the journey home.

This is where the fun started.. At 1.30am on the 19th I’m asleep and my phone rings, Inga’s picture on my phone, my heart pounds it really can only mean one thing! She’s calm, I’m not… “Its started, I’m going to the hospital, I’ve booked you on the 6.05am flight, get here!”

Cab booked straight away, not another wink of sleep, get to the airport and pace around a bit, ask the desk three times if there has been any delays, change seats so I can be nearest the exit… land, check my phone to read “Its happening now”, sprint through the arrivals to passport check, smile, sprint out to the cab rank, explain the situation, pay the guy extra to hurry up the hell up, its happening now, out the cab before he’s stopped driving, sprint up to the maternity ward, mid-wife says in a thick German accent “Ah, you’re here he has slowed down now.” I am sure that’s not the last game my son will play with me!

The next five hours that followed were the strangest most surreal magical, all those things that all Dads say, I get it now! At 2.36pm Jona Finley Curle was born safe and well. Yes three days early and yes I would have had time to drive over, let’s just say not everything in Germany is not as efficient as us Brits are lead to believe. 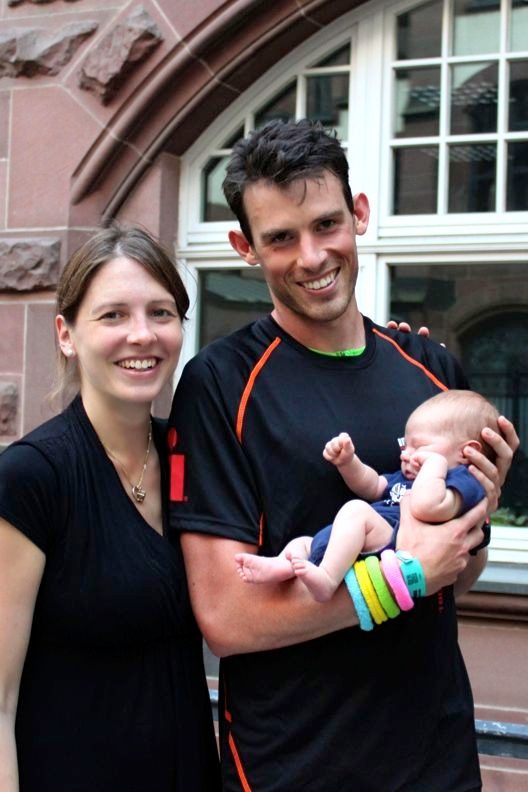 As it turns out I had over three weeks in Germany riding the course, running by the river and getting to know Jona, no work, no stress, just some last minute tweaks to my race plan as it draw closer. Oh I did have to fly back to London and then drive back to Frankfurt, no worries – all worth it.

Race day came nearer, I was calm, Jona, well Inga was allowing me to sleep at night so I was rested and ready to go, training had been done, race weight achieved, bike all sorted. I had a new motivation… “Don’t let all this running around, crazy plans, numerous flights be for nothing – make sure you finish this one.”

I started towards the back to find some open water and swam at my own pace, I am a decent swimmer now though not great, I just don’t like being punched and kicked underwater, so I tried to keep wide at the turns and looked for open water when possible. I exited in 1:17hrs, comfortable and calm – I have swum the distance faster in the past but I probably swam an extra 200m as I didn’t want a repeat of Zurich. I took my time through T1, had my planned energy gel, got rid of sand on my feet then hopped on my bike.

I was determined to enjoy this, I had ridden the bike course at least 15 times and knew all the hills, the parts where I could attack and bits to sit up and spin. The Germans organise a fantastic race, people lined the course everywhere especially along the cobbled section in Hochstadt and the climb through Bad Vilbel making me feel like a TDF rider very briefly. 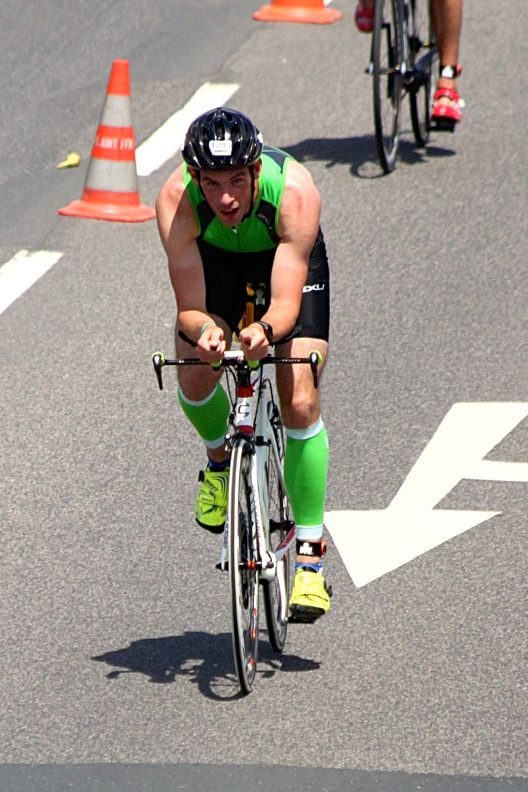 I knew where Inga and Jona would be, and as I zoomed under the bridge on which they stood I honestly felt how cool is this, my new family watching me do something this daft! The roads are smooth and fast, the organisers give you the racing line through all the corners, no real wind, and my nutrition was perfect – I loved – 5:24hrs.

The sun had started to shine strongly; I had packed sun cream in my bag, again no rush through T2. Cream, gel, new socks, trainers, hat, bathroom, go! I wanted to run the first 5km without using the feed zones to get the legs going, then after that get fluids and fuel and all the feed zones and walk through them.

Which is exactly what I did, the plan worked, no walking, keep running, count the kilometres up until halfway and count them down afterwards. I ran the London marathon this year and ended comparing the two marathons, 10km – Greenwich, 25km – Canary Wharf, whatever keeps you going right? Marathon time 4:17hrs.

My ever-supportive wife Inga was at the finish line taking pictures, not the most flattering pictures I have to be honest! I had finished in a decent 11:14:38 (aiming for under 12hrs). A quick flood of emotion as I crossed the line, but all I wanted to do was go see Inga and Jona, one of the excellent volunteers grabbed my white bag and my medal and t-shirt for me (IM really do things right) as I grabbed a beer and headed for the exit – and there they were – waiting!

It has been crazy few weeks, my emotions have been all over the place. Luckily all our planning worked out in the end – all the credit has to go to Inga, she has been amazing and has literally allowed me to train and tick this off the list. The arrival of Jona has at least given us a story to tell him when he is older and something we will never ever forget.

I wonder how long I have to wait until I can say I want to do another one?