In a bid to improve his race performances, age-grouper David ‘Big Man’ Pawsey tries the Advanced Triathlon Package – and learns lots from his day as a lab rat...

Since my disappointing performance in the Windsor Triathlon last months I’ve decided to reassess my training programme.

Luckily I was invited to the Surrey Human Performance Institute to try out their Advanced Triathlon Package. We’ve all seen photos and footage of elite athletes powering away on a treadmill with various tubes and wires attached to them.

But I’m not an elite athlete, I’m a less-than-average age-grouper with a bit of a weight problem. Is there really that much I could learn from being put through my paces under lab conditions? Turns out there was.

The first part of my testing involved a body composition test. Measurements of various skinfolds around my body were taken using what looked worrying like medieval torture instruments. I was pleased to discover that there wasn’t any pain involved.

I was also delighted to find out that I had an estimated body fat percentage of 22.2% which placed me in the “acceptable” category. According to the report I received a day or so after the testing this puts me in the “average” category for both athletic and normal males.

However that’s where the good news ended. The next measurement taken was my waist to hip ratio. This quantifies your distribution of fat tissue around your waist and hip. According to my report storage of abdominal fat is particularly undesirable, as fat tissue is therefore stored in closer proximity to the vital organs, increasing the cardiovascular risk. My waist-to-hip ratio was 1.02, which is above the recommended level for males (<0.95), putting me at an increased risk of cardiovascular disease. My BMI was calculated as 32.5kg/m2, which is in the obese category. Unsurprisingly it has been recommended that I cut down on alcohol, sugars and saturated fats. 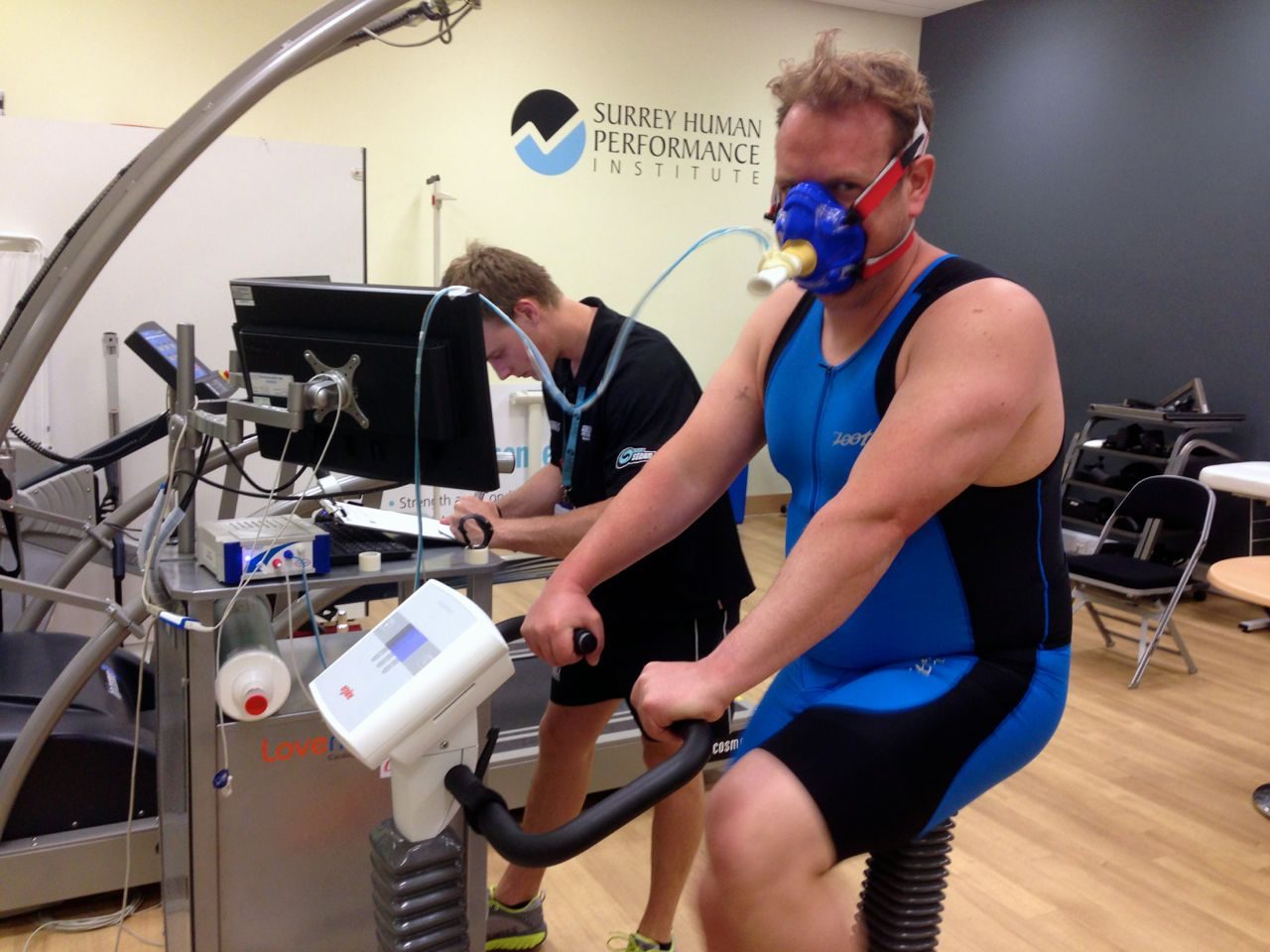 Next I took part in a ramped cycling ̇ test which increased at a rate of 30 watts/min. My underlying physiology during cycling was measured through gas exchange analysis of inspired and expired air. Apparently I peaked at 330 watts when my maximal oxygen uptake was 37.4 ml/min/kg.

My anabolic threshold, or AT, (which indicates the intensity of exercise at which the body’s ability to effectively clear circulating lactate from the blood is surpassed) occurred at a power of 210 watts. This was when my heart rate was at 138 bpm, 80% of my maximum recorded cycling heart rate of 173 bpm. My oxygen uptake at threshold was 25.5ml/min/kg (68% of my maximum oxygen uptake). Apparently elite athletes can have an AT of around 90% of their VO2max.

Considering the report I received is 17 pages long this is  rather a simplified summary but effectively it was recommended that I alternate sessions where I exercise at an intensity around my AT (40 minutes with my heart rate around 138 bpm) with high intensity interval sessions. The former should help improve my AT while the latter will help me not only lose weight but reduce lactate production and enhance neuromuscular control.

While I know this is pretty much the triathlete’s training mantra (longer, steady rides and runs on some days while others it’s short, sharp intensive drills) this was probably the first time that I actually fully understood the science behind it. Probably because I didn’t do very well in my science GCSEs.

Running up that hill 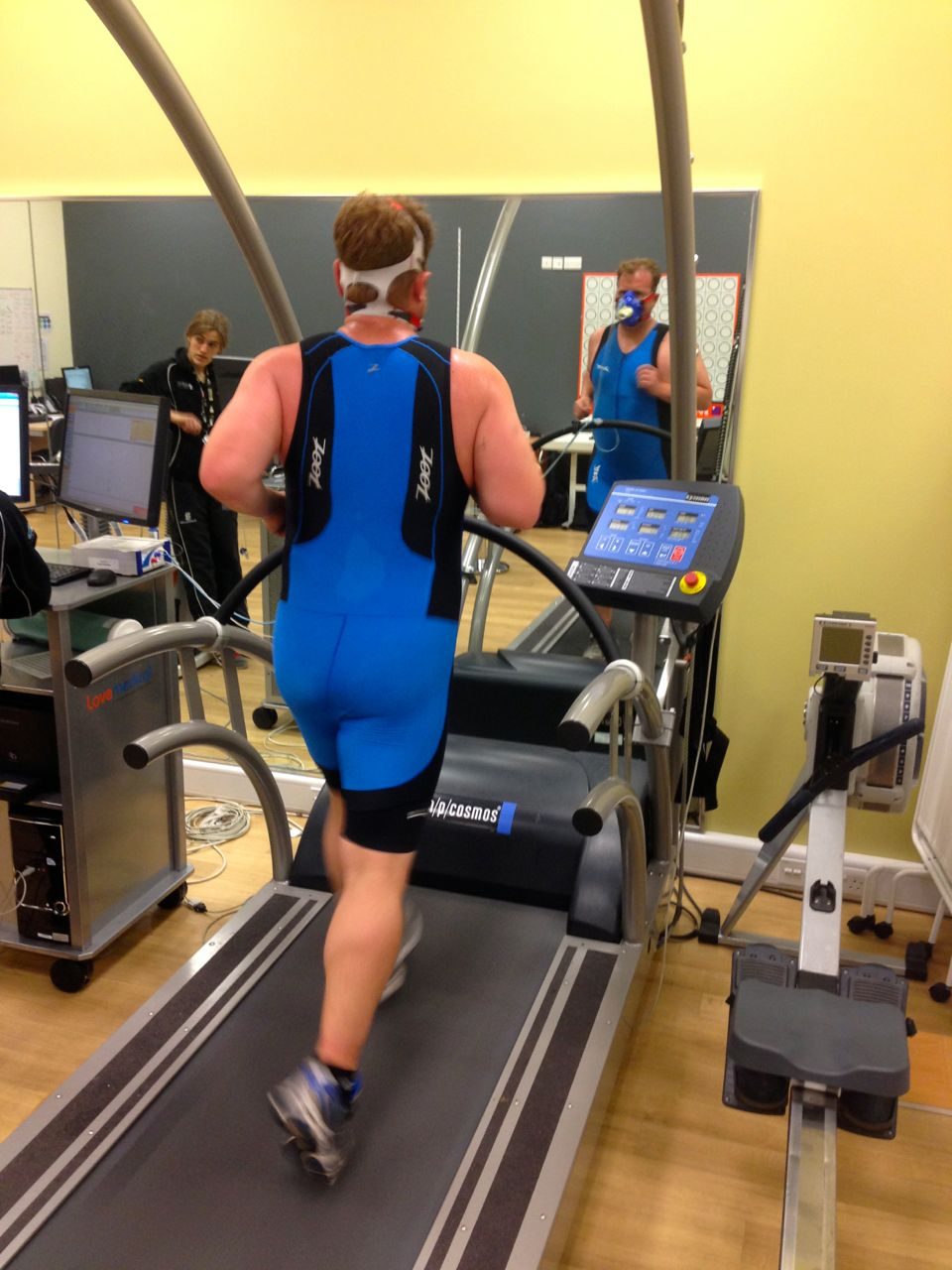 Finally my running performance was measured through gas exchange analysis while running at incrementally increasing speeds on the treadmill. This was carried out in stages. Firstly the treadmill speed was increased by 1km/h every three minutes until anaerobic threshold was reached. In the second stage, the speed was set 2km/h below the AT and the gradient was gradually increased (by 1% incline per minute) until I cried for my mummy and could no longer carry on.

Running is my least favourite part of triathlon and I am particularly slow. However I was pleased to discover that my running economy was “generally very good”. This apparently means I have an efficient technique and therefore improving my physiology (in other words losing the belly) should improve my threshold speed. Again it has been suggested that I alternate sessions between longer runs set roughly at my AT with high-intensity interval sessions.

I am aware that my poor approach to nutrition greatly inhibits my triathlon progression. Seeing the impact this is having in black and white (“increased cardiovascular risk”) adds a slightly different perspective. While I consider myself “fit” it is increasingly evident that I am not particularly “healthy”.

Therefore I think the challenge for the remainder of the season really has to be in reducing this dangerous fat around my vital organs. Improving race times quite bluntly has to be a secondary concern but hopefully the latter will be achieved by tackling the former.