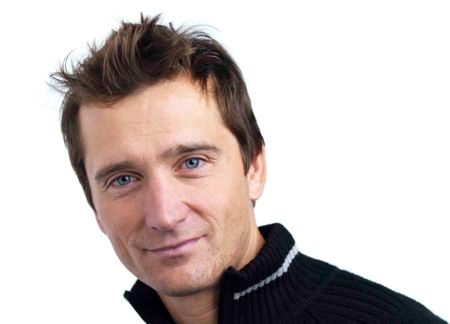 The call time is 9am in the media tent just behind the stadium that overlooks this Hyde Park course.

I am the first one to arrive, beating the traffic by riding into London on my motorbike. The BBC team responsible for today’s live coverage numbers 23 people in total.

In charge is editor Vicky Cotton, who will spend most of the day in the OB (Outside Broadcast) truck with the Director Matt Griffiths.

Triathlon Producer Sarah Richardson (responsible for coverage of the 2013 series until this point) will be based in the mixed zone, with presenter Sonali Shah and expert Chrissie Wellington.

My friend and Ski Sunday cameraman Keith Wade will be operating the fixed camera from that position.

Matt Chilton and Steve Trew will take up positions in the commentary box, and I will be out on the course with the radio camera looking for pre-race interviews, and reaction during the race.

No need for H&M today

While Sonali and Chrissie head to hair and make-up in the truck, I head out to test the camera range. The forecast is for strong winds and rain, so little need for me to bother with H&M.

Trees are notorious for swallowing up the camera’s radio signal and this is true again today, our range is limited as far as the pontoon and the wheel change at the end of the finish straight.

It is 12.30 and the athletes start appearing to rack their bikes, we are on air at 1.00, so pre-record a pre-race interview with Alistair Brownlee as he nervously goes through his pre-race preparation.

We have to be careful filming at this stage, we do not want to upset any of the elites, or get knocked down by an age-grouper about to finish their race.

I know about the problems Alistair has been having with his ankle this season, but see little point in putting him on the spot, it’s not like he will tell me anyway, particularly with Javier Gomez in earshot.

The athlete start their swim warm-up and I head to the stands to chat to the Brownlees’ training partner Rhys Davey and their younger brother Ed.

The race starts, and although Gomez struggles slightly in the first loop of the swim, he fights back into contention for T1.

On the bike leg Alistair pushes hard to get away, but it’s a move forced out of desperation, made clear as soon as his feet hit the ground in T2.

I run over to Emma Deakin, British Team Physio, to get the low-down on Alistair’s ankle as the race hots up between Jonathan Brownlee and Gomez.

One lap to go and I am back up in the stands with the Brownlee family, as the cheers of Jonathan, Jonathan ring out.

In the end the sprint goes the wrong way for British fans, but lovers of triathlon can take heart in the fact that it was a cracking race and the BBC viewing figures peaked at 2.1 million.