For 24 years I was senior self defence trainer for Northumbria Police as well as a physical brief training instructor and sports development officer before taking voluntary redundancy at 60. A former Royal Marine, I represented the corps at athletics, cross country running, boxing and hockey.

I entered triathlon after reading a brief article in the Daily Mirror by Brendan Foster in 1982 basically outlining the sport and how it had taken America by storm – it sounded interesting! Brendan worked for Nike at the time (I think), and the article suggested that the sport was about to flourish on our shores. 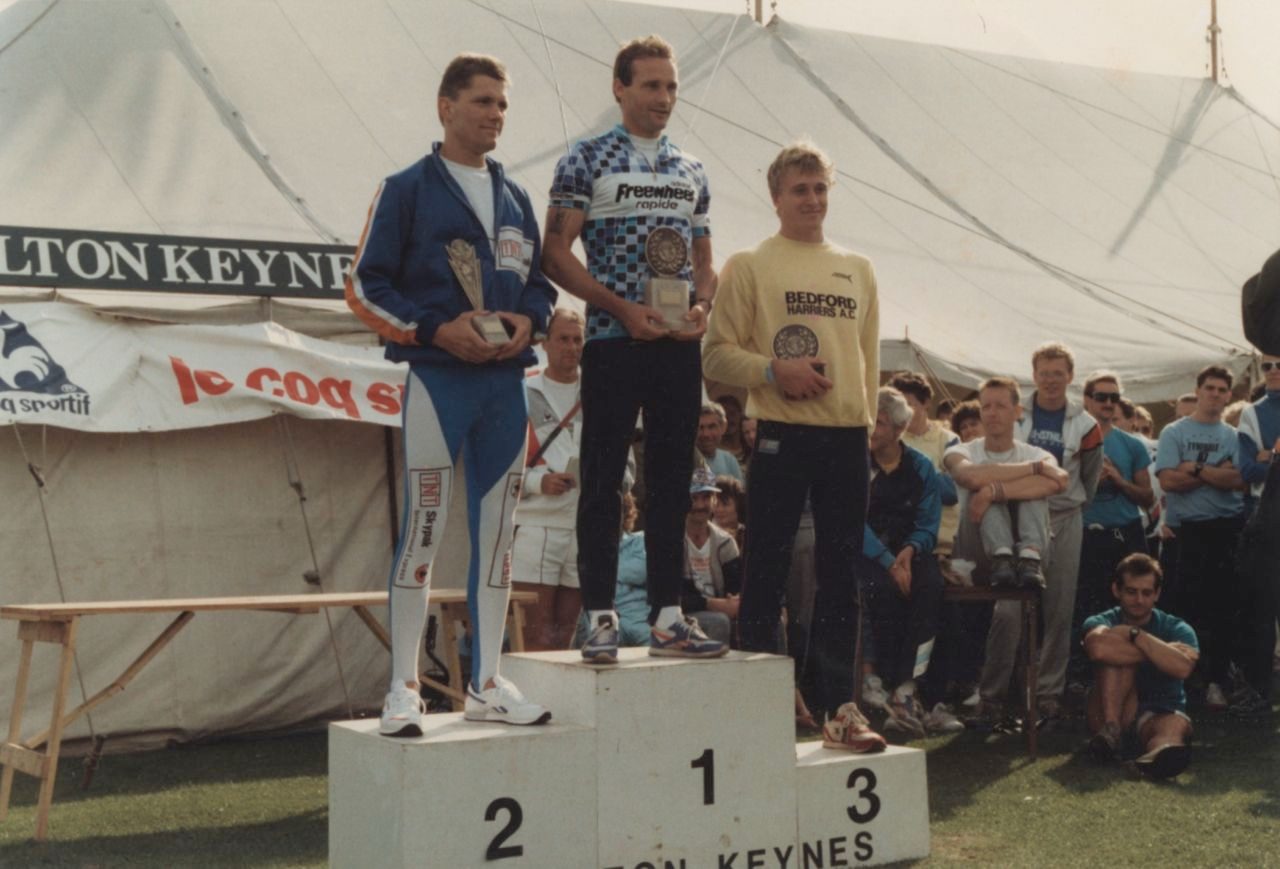 I also placed 14th and 16th in the worlds at Nice, and was Ironman record holder for a while, plus 10 times National vets champion. In all I won 47 events and importantly I remained an amateur athlete throughout, working full time with two young sons, and was always self coached. I finished with triathlon in 1994.

A short spell followed doing Ultrafit competitions, before being persuaded by a work colleague to enter cycling time trials where after a couple of years finding my ‘cycling legs’ again, I went on in my 50s to win 75 open time trials. At the age of 61 I completed a 10 mile time trial in 20:25mins, so when entering triathlon again this year I wasn’t unfit and was a quality rider – albeit an ‘old un’! However I hadn’t run for years and hadn’t swam at all either. 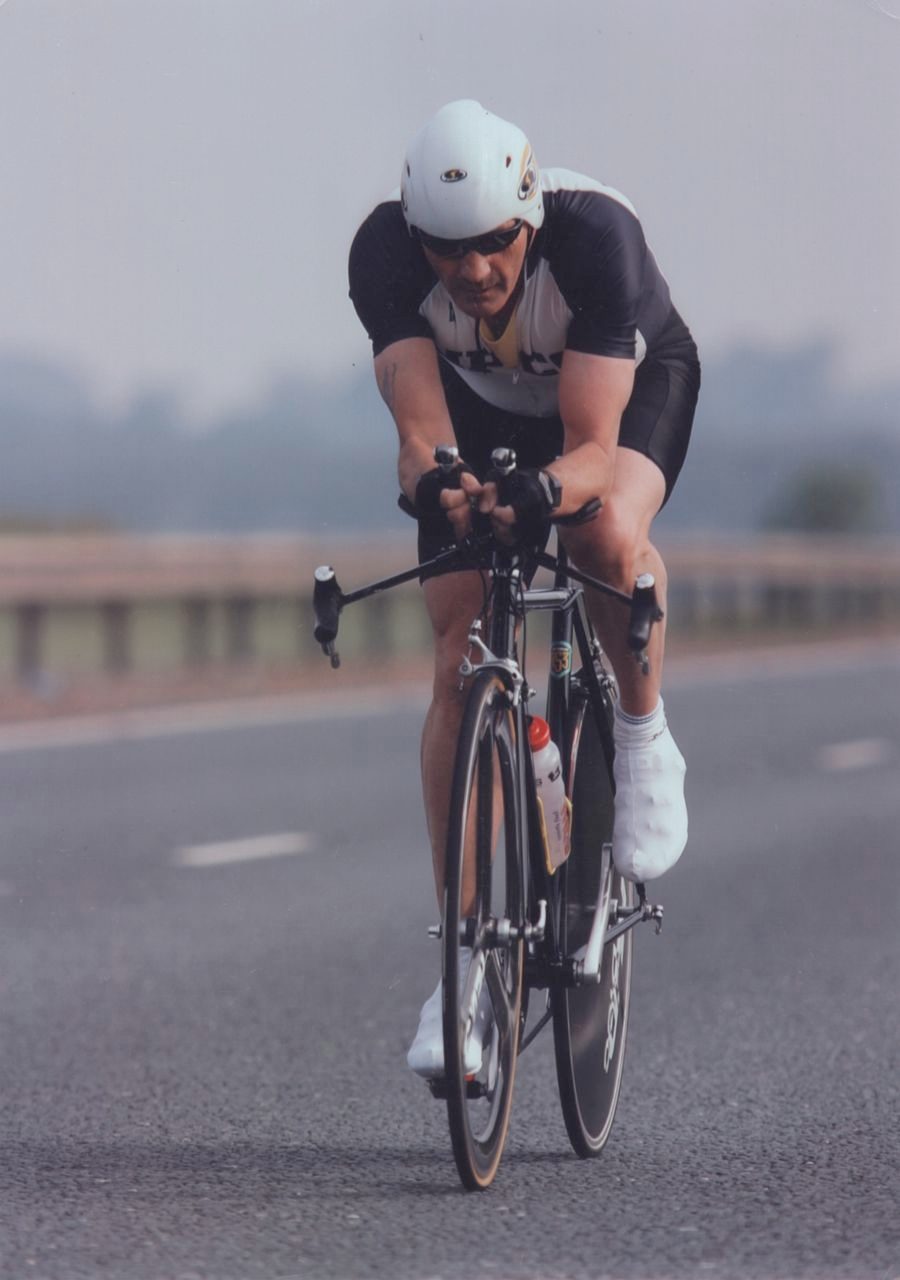 One of the reasons for entering triathlons again following a 20 year absence was due to fairly consistent lighthearted but slightly annoying banter from friends and other athletes generally about how triathlon had really changed from ‘my day’, suggesting perhaps that my era was somehow less competitive, less taxing, and not as professional.

As mentioned earlier, when I was doing triathlon previously I trained 25 hours on average most weeks of the year to attain my results (as well as working 40 hour weeks), mostly three times a day: swimming before work, running during lunch times and cycling after work. This was regardless of work or the inevitable family duties or even the often adverse North Eastern weather. 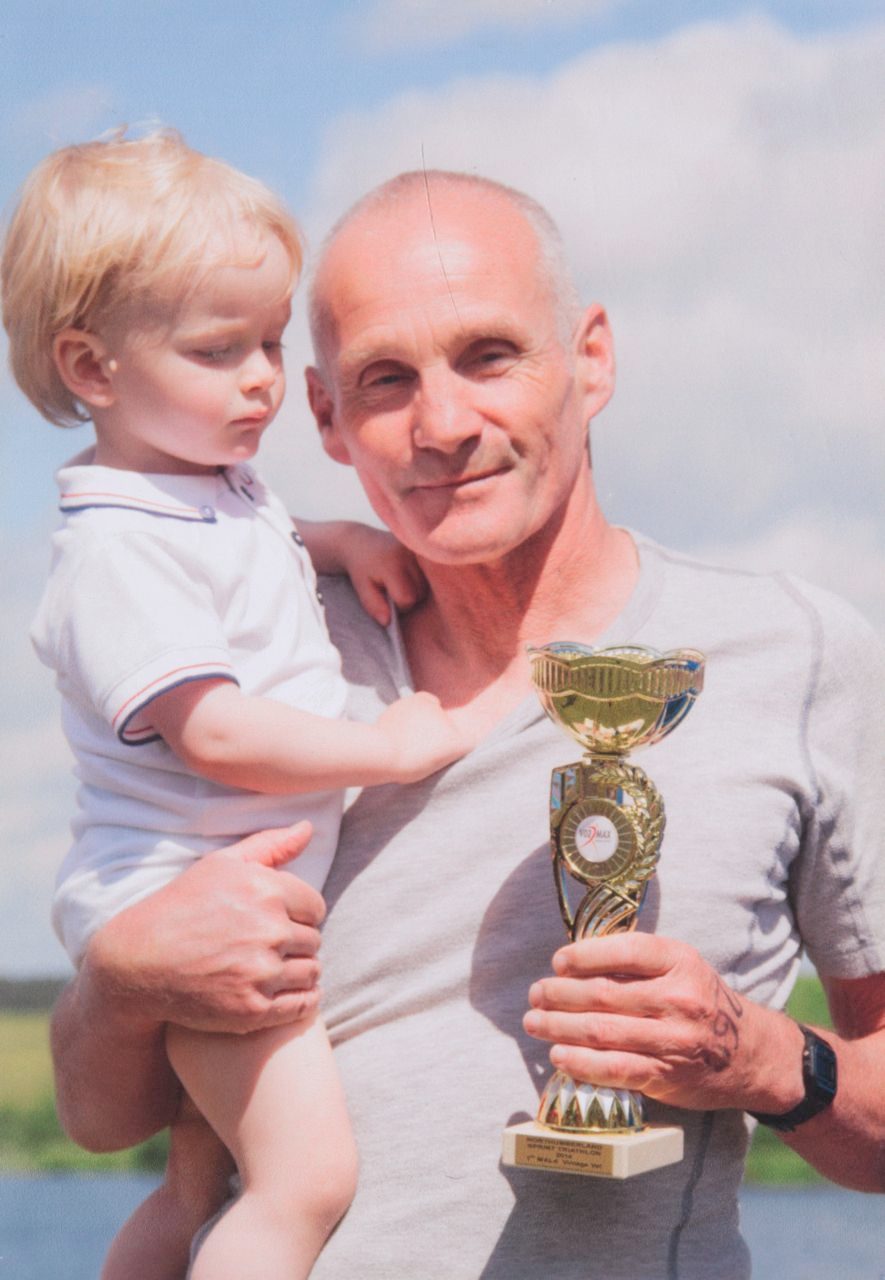 It is interesting to note that as early as 1985 triathletes in this country were wintering in California, Zimbabwe, New Zealand and elsewhere before returning home for competitions – but not me, for whom it was out of the question with finance, work and of course family. 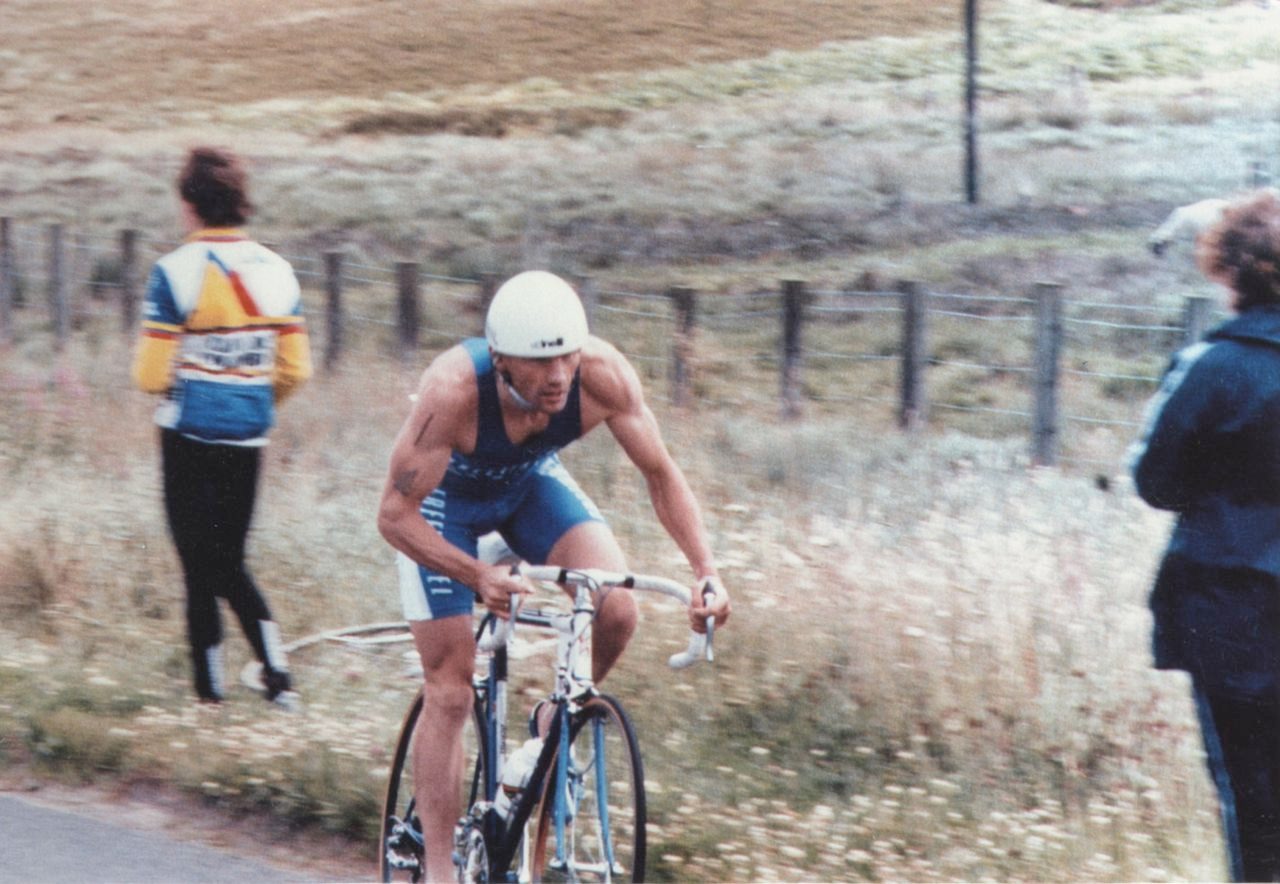 On deciding last year to enter triathlon again following my extended break from the sport, my aim was simply to satisfy intrigue and see if I was capable first of all of being physically able, not having swum or ran for years, and additionally to see how, regardless of my 63 years, I would fare in competition.

I also wanted to see whether ‘ordinary triathletes’ who make up most of the fields, in terms of numbers, were better – in other words, more proficient or fitter than in the years of the 1980s/90s?

I have always given my all in sporting competition and this venture was to be no different. Having made the decision, I began training in January with my training reflecting the aim, and I began to tentatively swim again which I found surprisingly easy (my first swim was 2,500 metres front crawl) no problem!

However from the minute I started to run again I encountered immediate injury related problems, mainly in my calves but also lower back, and even the glutes and even now I have a groin strain. I was forced to stop running time and time again, and was seriously worried that my running days were over. It is worth mentioning that my running in triathlon was exceptional and my strongest discipline of the three. I recently dug out some old result sheets and time and again I had the fastest run splits. 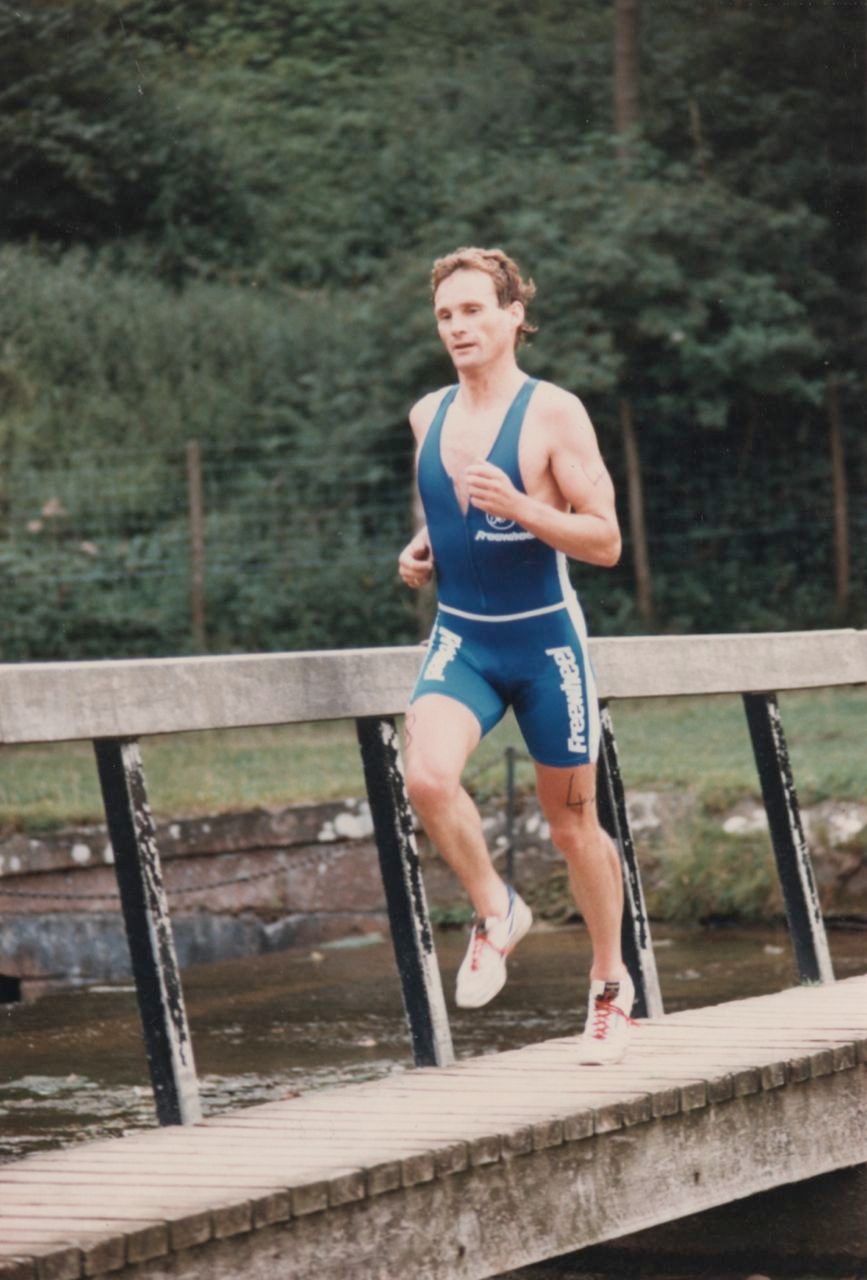 An example: on 18th July 1992 at the Ironbridge half Ironman event and at the age of 42 I had the second fastest half marathon time with 1:11:46! This from a finishing field of almost 500 athletes finishing the event. So initially I was very disappointed how my very fit body responded to running even at a very slow pace and on grass.

Regardless, and although unable to run, I continued to swim, ride and race on my bike. I figured if nothing else I could enter an event and simply do the swim and cycling elements before calling it a day without the run – at least that would tell me something even if frustrating! This continued on and off for many weeks, each time I tried to run again I’d encounter the same running related problems, occasionally getting several jogs put together before what became the inevitable injury.

My first event was the Northumberland Triathlon in June 2014. A sprint 750 lake swim, 20k cycle and 5k run. I decided that to compare my performances of 20 years ago with the current one I’d use the same equipment as I used then. I had a Terrapin wetsuit, 20 odd years old, which I just about got into, but then struggled big style to get off it off. For any watching spectators the latter must have caused wonderful entertainment!

I wore a tri-suit I last used in the 1980s, used a 753 steel frame bike dating from the 80s, and ran with a budget pair of Brooks running shoes. Worth mentioning again that leading up to the event my running was almost none existent.

On the day of the event I took my running shoes even though I knew it was be unlikely I’d complete the run. However, on the day I was walking without any apparent leg problems, so a wing and a prayer! To cut a long story short I finished the event in 1:12hrs, had the third fastest cycle split on the day from the 202 finishers, managed the run at a steady jog of 24:11mins and came 20th overall.

My transitions were shocking, losing minutes which cost me several overall positions. The event was superb in terms of organisation, and other competitors were as friendly as they always were in my day! I considered the event a personal success for two main reasons, firstly I finished, and secondly my performance all things considered was very respectable….

Mike will be reporting again soon on how his next race went, and whether he thinks triathletes today are better than they were in his heyday – stay tuned!

How much swimming should triathletes do?

Blog: Digging deep into the hurt locker at the Double Brutal Extreme

Age-group blog: the road to Bolton