France’s Mount Ventoux, nicknamed in cycling circles ‘the beast of Provence’, rises almost two kilometres above sea level and towers over the vineyards and small villages that surround it. A regular in the Tour de France, Ventoux is reckoned by many riders to be the toughest climb in pro cycling packing an average gradient of 7.4% into its 21 torturous kilometres, although this only tells part of the story as many sections rise over 10%.

All of which makes it the ideal first climb for a novice cyclist who’s never climbed anything longer than the small mound at one end of London’s Richmond Park… Someone like Team 33’s Erica for example, who took on the mountain while on holiday in the region last week.

The first ascent was halted halfway as freezing weather and impending darkness made pushing on inadvisable. But with this comfortably in the bag, she came back a day later for another swing and, gritting it out on the small ring (Specialized’s Dolce comes in a climb-friendly triple option, which the team have all opted for) she wound her way to the summit in a shade over three hours. A stunning effort for a total beginner and proof that when it comes to taking on new challenges, a lot of it’s all in the mind.

Back in London and reunited with Anya and Giovanna, the whole team headed to Performance Pro just off Oxford Street and their well-equipped fitness bunker to make use of the Wattbike static cycles they have there. As used by British cycling, these are the most accurate measure of power and pedaling efficiency around and are the ideal training aid for any cyclist to identify how to raise their game.

Pros use them to fine tune pedal technique in search of that vital extra watt, beginners like the team can use them to simply learn the foundations of perfect pedaling. Under the watchful eye of Performance Pro’s cycling specialist Tony Purcell and Wattbike’s Matt Moran, the girls were put through their paces.

The first revelation was how much of a benefit no previous experience can actually be, because none of the girls have yet had enough bike time to pick up the bad habits that quickly become ingrained in longer-term riders. The basics they have learned to date have come from the few riding sessions they’ve had so far and, in Giovanna’s case, from surreptitiously eavesdropping on her husband as he taught their five-year-old son to ride in the local park.

Either way all three are veritable sponges, just waiting to soak up the expertise given to them.
There are some limitations of course. When Tony produced some clip-in pedals and asked what shoes the girls had he got a trio of bemused faces and some mumbling as they all pointed at their trainers…

This is a big journey that needs tackling in small steps and while clip-ins are efficiency defined, they’re also a bugger to get used to when you’re still concentrating on simply riding the bike in the first place. No problem though because there’s still plenty of training time ahead and, if it comes to it, as Erica demonstrated perfectly well on Ventoux, trainers and flat pedals can still get you to the top.

Back on the Wattbikes, Matt explained the core of good technique. 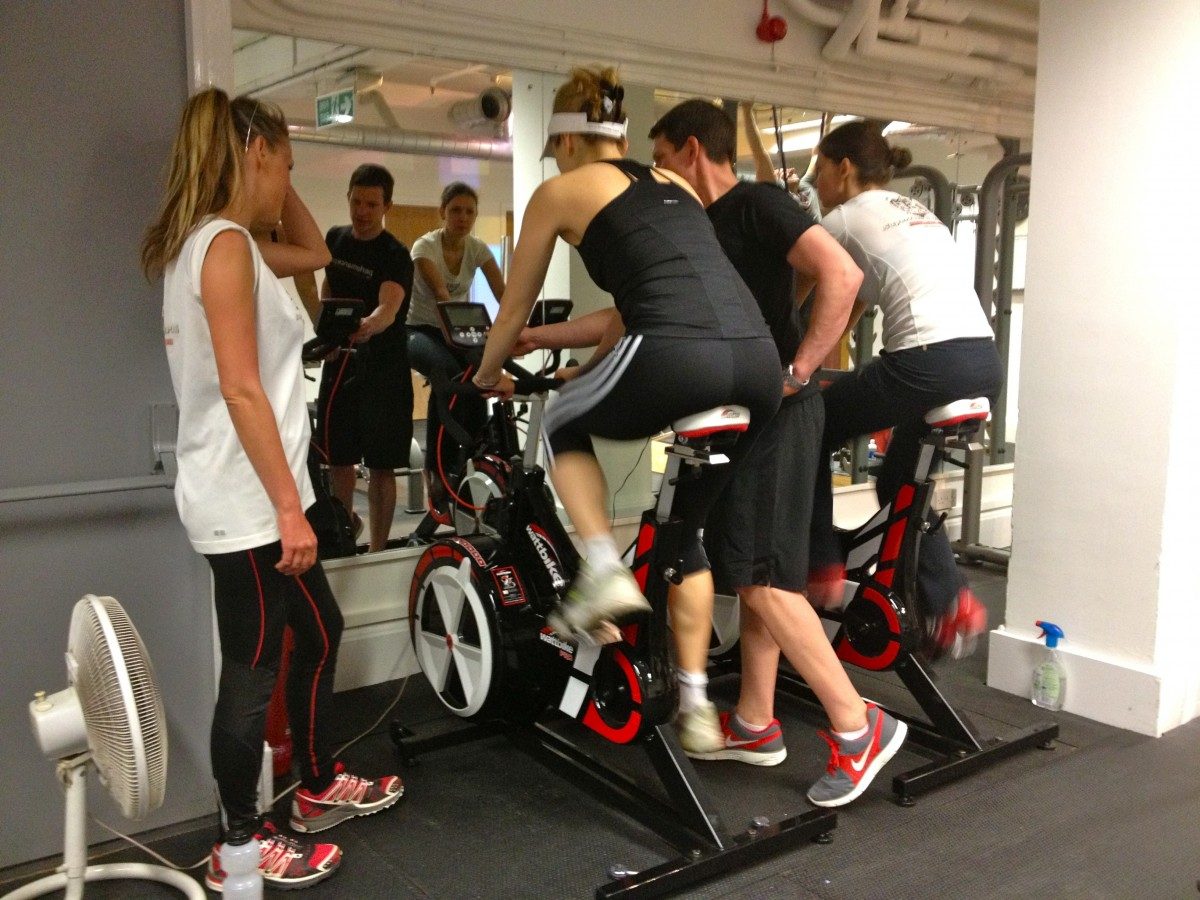 “Never stand up when climbing. You’ll only raise your heart rate and drop your power. As soon as you get out of saddle technique falls apart – the only people we’ve ever seen who can climb well out of saddle are highly-trained and under 55kgs. Spanish climbers basically. Otherwise we rarely see riders, even elites who can pedal out of the saddle effectively. You want to stay smooth and consistent – your event is about not getting fatigued until the last kilometre of the run”.

And so off the girls went and the results were promising indeed, with good basic technique achieved by the whole team.

Team 33Shake is naturally fuelled to perfection by 33Shake, 100% natural superfood sports nutrition (www.33shake.com), with additional big thanks to Specialized bikes for the Dolces (www.specialized.co.uk), Wattbike (www.wattbike.com) for the cycling know-how, and Performance Pro (www.performance-pro.co.uk) for their fine facilities and hospitality