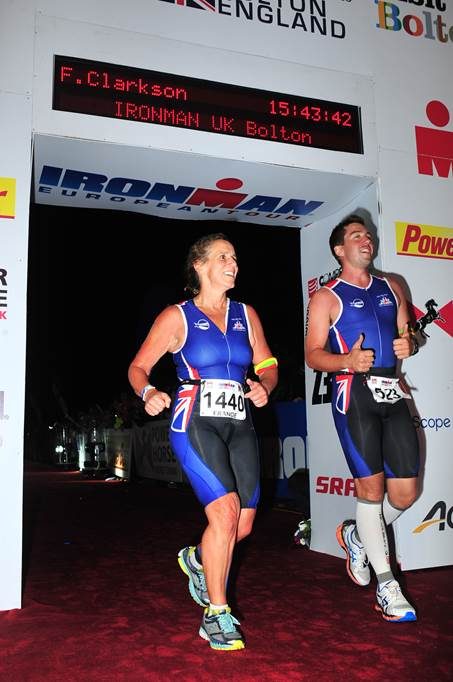 I have come to the conclusion that competing in an Ironman event is like childbirth. You go through the pain and agony, vowing 'never again', then, before you know it, you’re back, suffering it all over again. Well that’s certainly how I felt on Sunday 4th August.

The road to Ironman UK 2013 started well this year with the arrival in April of my new, custom-made, carbon-fibre LIOS bike. This was built for me by Steve McCully, who was blown up in Afghanistan in May 2011 and lost significant mobility in his right arm and leg, together with 80% of his lung capacity and his glittering military career as an officer in the Royal Marines.

Being a resourceful chap, having undergone many painful operations and rehab, Steve fell back on his other passion – bikes. With some support from Help for Heroes, he started a bespoke bike-building business and I was one of his first customers.

On my second outing however, being a bit of an idiot, I fell off – fracturing my right elbow. This meant four weeks off cycle and run training and six weeks off swimming. That (just) gave me time to get back in the water for the Blenheim Triathlon on 9th June – the first of three short, sprint and half-distance events I’d signed-up for in June.

July involved more long-distant training with the last week reserved for “tapering down”. That’s my favourite training week, when all you have to do is rest and eat! But at the start of this rest-week, whilst gently applying body lotion to my arm, I wrenched my back. I was in agony for five days, trying massage, stretching, pain-killers and (definitely most effective but not strictly allowed) alcohol.

In desperation, on Friday, with less than 48 hours to go, I resorted to the dark arts and put myself in the hands of an alternative therapist. After acupuncture (with added electrodes), cupping (don’t ask), a rub down with curious sounding oil and plant extracts (possibly including eye of toad), the therapist stood behind me, wrapped his arms around my chest, lifted me up, at which point my back made a series of alarming cracking noises (ever made popcorn in a microwave?) and hey presto!, I was cured. A little sore and looking like a pin cushion but much more confident about the big day.

Some final preparations, then the pub

That night, Team True Spirit met in our hotel and it was decided that we should get up early the following day and go for a short swim in the reservoir to acclimatise. While my back had been relieved by the therapy, I was extremely nervous and went to bed dreading the following day.

As it happened, the swim went well. My back was still sore but the wetsuit seemed to protect it and the water was mercifully warm. With that out of the way, and my mind greatly eased, we set about the jobs of packing up our bikes, clothing and equipment for each of the swim, bike and run transitions.

Having suffered terrible indigestion from an overload of power bars and energy gels the previous year, we kept it simple and packed up some Daylesford Organic almond cake, a muesli bar or two and a large bar of Green and Black dark mint chocolate to eat on the road.

With our bikes racked and equipment dropped at the various transition points, by late afternoon, there was only one thing to do and that was go to the pub. A couple of beers and a large steak and chips = hydration, protein and carbohydrate.

Race morning and the team were up by 3.30am – including our official photographer Em Clarkson and our team cheerleader Katya Clarkson. As this would normally be their bedtime on an average Saturday night/Sunday morning, they looked remarkably bight-eyed and bushy-tailed.

We all made a good attempt to eat some breakfast, before setting off for the reservoir. As it started to get light we merged in with the thousands of other competitors, all filtering through to the lakeside.

At 5.45am, tightly zipped into wetsuits, we shuffled nervously to the pontoon and into the water.  At 6am, the hooter blasted the signal to start. I immediately did nothing, treading water and waiting for the thrashing shoal of swimmers to get out of the way.

When the main throng were well on their way, I started the swim. I have learned from previous events that I am safer at the back, well out of the way of what has been described as the “washing-machine”, where flailing arms and legs can render you winded, bruised and stripped of your goggles and even wetsuit. Who needs it?

The 2.4 mile swim is broken into two loops of the reservoir, with a short hop out of the water and a run over a timing mat, before jumping back into the water for the second loop.

As I had completed the first loop, I heard the commentator say that Greg Whyte, the man who had given me swimming lessons and who was hoping to qualify for the World Championship, was already on his way to his bike. Only another 1.2 miles for me…

At one hour and 41 minutes, my swim time wasn’t fast, but I was by no means the last one out of the water. I got out of my wetsuit and onto the bike as quickly as I could as I knew I had some time to make up. Conditions were good; cool and overcast but dry for much of the 112 mile route.

There is a short 10 mile run to the main loop which you then complete three times. At the start of the loop is the infamous Sheephouse Lane, which is a long steep hill ending with a really tight and even steeper hairpin bend. Everyone dreads it.

My cycle section went well and I was able to overtake plenty of people who’d obviously been more courageous than me in the water – 77 in total. The second loop felt the hardest, perhaps knowing that you had to do it all again in another couple of hours. But the third loop reinvigorated me and I got to the run-transition in seven hours 41mins, with plenty of time in hand. Now just the marathon to run…

The first five miles of the run felt good.  Not fast but steady. The next six were harder and I found that the ‘run five miles, walk half, run five’ routine had reduced to ‘run one, walk 0.3’. Again, not fast but at least I was moving.

At around 10 miles into the run, the rain that had been threatening all day, started to come down in stair-rods. Initially, this brought the sweat into my eyes, rendering me almost blind for a couple of minutes but once enough water had soaked through my hair and skin, it was really rather nice and helped to keep me cool.

Like the bike route, the run involved a short run (eight miles) onto the circuit, then three six-mile loops. And again, the second of the three loops was hard. But when we started our last lap – with the words of my daughter Em, ringing in my ears “Mummy, you could go round on your hands and knees and still be finished within time” – I knew we were going to make it.

The sight and sound of the finishing line spurred me on to a last push so that I was running as I hit the red carpet. People stretched out their hands for high-fives as I ran up to the finishing arch and then I heard the words “Francie Clarkson, you are an Ironman”. Joy! I had done it. And in a total time of 15 hours 43 minutes.

That night, the members of Team True Spirit were jubilant. We had all completed the course within the 17 hours and felt like returning heroes as we shared our stories of the event. And we all vowed, never again….