Meet the Russells from Harpenden, who have all got the triathlon bug over recent years. Tony Russell (56), Peter Russell (54), David Russell (48) and Tony’s son, Dan Russell (25) have all completed an assortment of triathlon races over the last seven years, and are aiming to complete Ironman Mallorca in just over a month’s time.

Tony started with marathons back in the 1980s completing four in London, but the triathlon bug for all three brothers took hold in 2007, both sprint and Olympic distances here in the UK include Blenheim, Windsor and London as regular favourites. Last year Tony and Dan completed their first Ironman in Nice. A life moment but over 13 hours of mental focus and the end of a training regime that had no script.

This year the focus is a busy timetable of sprint and Olympic distances around the south of England and the half Ironman in Mallorca on the 10th May, where all four Russells and ‘honorary Russell’ Andy Brown will line up for “Five go mad in Mallorca”!

Is there a triathlon gene? 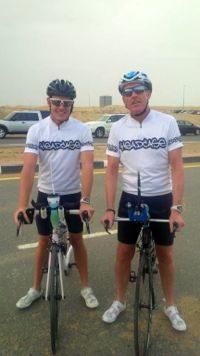 With only 24 hours in the day the need to squeeze in time on the treadmill, the pool and the bike becomes a daily slog. The early morning starts to haul the body out of bed and get to the gym to cycle or swim and still make it for the commuter train to the City has been tough. Little things like laying claim to “your” bike in the gym become a major issue when someone else is using it!

The challenge of the body

Their histories include a plethora of injuries: Tony, Peter and Dan all have cruciate ligament replacements, Tony both knees, Andy a bucket handle tear to the knee that stopped any ideas of his rugby career, Tony bust his rotator cuff in January 2013 (only six months before the Ironman) and his appendix removed in 2012 four weeks before Windsor.

Dan competed at Blenheim and almost immediately stepped on a plane to return to Dubai only to be hooked up to a ventilator and intravenous drips to tackle a chest infection. David and Peter crossed the line together in 2009 in London, David suffering from a stomach bug. It appears the Russell gene prevents these little hiccups getting in the way of training and racing.

In the lead-up to Ironman Mallorca the training has been stepped up following the usual Christmas binge. The younger members have selected core strength and a variety of disciplines, conforming to a more High Intensity (HIT) format and the three older members are preferring putting in the miles. Tony says: “If I tried to do HIT then bits would start falling off.”

Boredom in the gym or even out on the roads is a major factor, and the temptation to go and have a beer and watch the footie is high. But during long dark winter evenings, choosing to sit on a bike for two hours instead means focussing on technique. The gadget requirement is the only respite, dials to watch cadence and pedal pressure can supply some alleviation from the boredom, but on the day that mental preparation is a valuable lesson to have honed.

Work-life balance is the subject of many an advisory word. As the distances or number of races increase, relationships with one’s nearest and dearest are put under strain, from a spouse being a keen supporter of the first four, five or six races through to an harmoniously married Ironman being a rarity unless the spouse is also an Ironman! 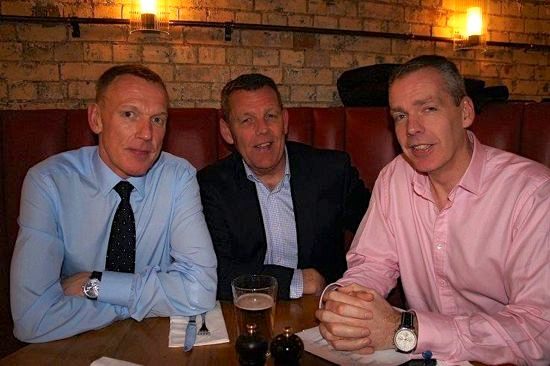 The mid-life paunch takes hold and an excellent method to keep the burger and fries ON the menu is to exercise. Some people diet to race, some race to diet – the Russells are a mixture of both. The decision to spend January alcohol- and carb-free was tough on the whole team, but the need to splash out at the Burger and Lobster for a team strategy meeting is also a mental must.

Life goes on with birthdays, business lunches, Valentine’s day, anniversaries, friends, mates. A whole week may not pass without some event or other to scupper the plan.

Much like in golf there is a form of handicap. The inspiration a 50+ feels competing against a 20+ is great but the overall aim to compete the race or rise amongst your age group peers is both reassuring and uplifting. Tony came 1st in ITU London 2013 in the men’s 55-59 age-group, and yes the statistic proves that if you go on long enough you will win (if only by the field of competition decreasing)!

The Ironman 2013 event marked a frenzied fundraising campaign that saw over £30k being raised for Team Russell’s chosen charity, Headcase Cancer Trust, which is looking for a cure to GBM, a very aggressive brain tumour with some frightening statistics: it is 100% fatal, and kills on average after about 14 months, has no cure or effective treatment and kills almost as many people as prostate cancer and over twice as many people as road traffic accidents.

You can find out more about Team Russell’s fundraising efforts at www.headcase-ironman.me. Team Russell’s efforts have funded one of the two PhD Students last year and hopes to fund the trials about to start looking for a cure.