Age-grouper Jay Woods reports on the recent Monster Duathlon in East Anglia (5km/25km/5km), where he placed 20th with a time of 1:29:47. Jay has set himself a ‘Man vs Monster’ challenge this season which will see him racing a duathlon, Olympic triathlon, sprint triathlon, middle distance triathlon, marathon and long distance cross-country duathlon.

Having done this race before I know it’s only a small transition area, so no need to turn up too early to get a good spot. Plus living just up the road means I can leave as late as possible and benefit from the rest. When the alarm goes off my first thoughts went straight to the wind I could hear outside. The Met Office website says 16mph NE with gusts of up to 25mph – thank goodness for TT bikes.

I arrive at Witchford Village College and some friendly faces soon pick the spirits up. With transition practised the night before, I only had to focus on the position of my bike in the transition area. This meant getting my bike in a position clear from a bunch of TT bikes that are squeezed on top of each other near the bike exit, and I make my transition area tidy. I know my wife wasn’t going to come and inspect it, but I had plenty of room.

Three minutes to go before the race I do a quick jog down the road with a Go-Pro strapped to my chest – it’s light, phew!

Paul Heselwood shouts out “2mins to the race”, Go-Pro on for recording and we bunch at the start. It’s go go go. I get a gentle start and need to calm myself and find a rhythm. There’s great support from the marshals, it makes you feel like you are just going for a run and waving at your friends. Which is actually what I was doing. Got into a comfortable position on the run with a few people injecting some pace around me.

I have to remind myself to sit tight and be patient at this point and try not to follow and push too hard. Off of the disused WW2 airfield and John Mac is beside me and going to run with me for a section picking my morale up, letting me know what’s happening up ahead, it’s nice to know how well your teammates doing. It’s always good to have John beside you, and something I have never experienced during a race before. 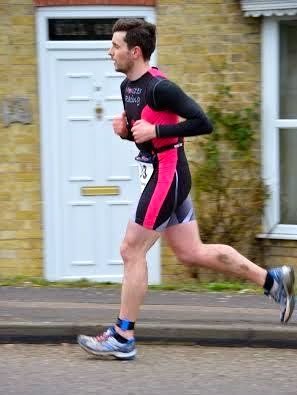 Out on the bike, clip the feet in eventually. And off. This is where it gets really exciting for me, every time I get on the the bike I feel like a kid. How fast can I go? Out of Witchford picking a couple of people off, next thing whoooosh. Someone just passed me at lightning speed. I didn’t expect that!!!!

Again I sit tight, and by the BP roundabout I’ve reeled him back in. A lorry pulls in front of me at the BP so I jump to the cycle path, slowing me down slightly. The guy is up on me and overtakes me at the roundabout but I manage to take him back quickly. An almighty push from the wind sees me at the next roundabout before I could say “supercalafragalisticexpialadoshus”. Sit tight here comes the headwind, head down into aeroposition and focus on trying to pick people off.

At this point I could see someone ahead on a Giant Trinity bike, giving me someone to aim for. At the foot of Coveney hill I manage to get on his tail, and use my 15secs of drafting time to give me a hop up at the bottom of the hill. All I remember is the wind in my face until I get to A142, I give a nod to Carl Ward, but can’t hear what he says back because of the bloomin’ wind.

Back to transition I get off before the dismount line, executed to perfection. Transition is smooth. Not wanting to lose too much time. Gloves still on out of transition, I think “hey I don’t need these lovely gloves”, so I put them in the bush to the side of the exit. (Hold that thought).

Out on the run and I’m starting to cramp up, so I slow for a few seconds while thinking two thoughts: “I wish I had Gary’s legs right now”, and also, “How long will it be before Gary turns into a dot on the horizon?” The marshals are going crazy giving me a great push, and I watch Gary slowly disappear. Did I say slowly – I mean disappearing quicker than Paul Daniels. 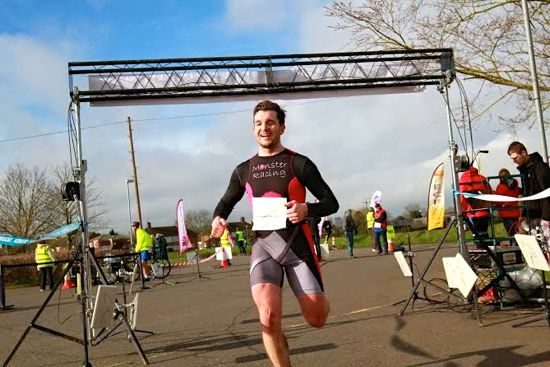 Now cast your mind back if you will, to that moment where I put my lovely gloves in that bush as I exited transition. Turns out it wasn’t such a good idea. The nice BTF official thought I was looking a little quick and also thought I could do with some extra time added on (2min time penalty, daaaaame). But rules are rules and another lesson learned.

I caught up with the guy at the end who whooshed by me on the bike, found out he cycled in from Longstanton. He probably would have beaten me on the bike if he had a bit more rest.

Thanks to Monster Racing and the great marshals for another well organised race. Also thanks to Monster’s sponsors – on rummaging through the great goody bag I discovered a brilliant PWR+ to help me recover and a 9Bar as a tasty post race snack.