How much do you love your turbo trainer? Enough to pedal on it for 12hrs solid? Brian Carlin, CEO of charity Aspire, set himself the challenge at the end of last month – here’s how he got on…

I woke before my 5:30am alarm and knew I didn’t have time to press the snooze button. I’d packed what I could back into my car the night before but I still seemed to have too much to carry down from my room in one go.

I managed to grab a coffee and half a cereal bar in my room but I wasn’t really that hungry. After my email the night before I’d received lots of offers from staff and friends to bring breakfast to me during my challenge so I wasn’t worried.

My hotel room door slammed behind me but I couldn’t help it. I had my bike in one hand, two sports bags and a laptop case but I tried to be as quiet as I could leaving the hotel. I was quickly set up in the Aspire National Training Centre reception in time for a final comfort break, and still managed to be on my bike three minutes early. With the first turn of my pedal my turbo trainer’s power meter clock started and the challenge had begun. Never having done this before I had no idea what I’d let myself in for or what the next twelve hours had in store for me.

It was funny to think that I’d started spinning before some of my staff may have got out of bed. Then a couple of hours later it was good to see staff coming into the Centre to start their day’s work. What wasn’t so funny was the fact that I’d see the same staff sign out and go home and I’d still be on my bike spinning.

Hydration began to be a real problem. I was soaked with sweat within five minutes as the reception area far too hot for such a challenge. I knew I was in trouble when I stopped sweating after only an hour and a half. I was never going to survive unless I got this sorted. Three hours into the challenge and staff brought me a couple of large fans to try to keep me cool. Paul Parrish, Aspire Director of Fundraising, had brought me in what he called a ‘power breakfast’. It looked more like gruel to me but I steadily ate it over about two hours. 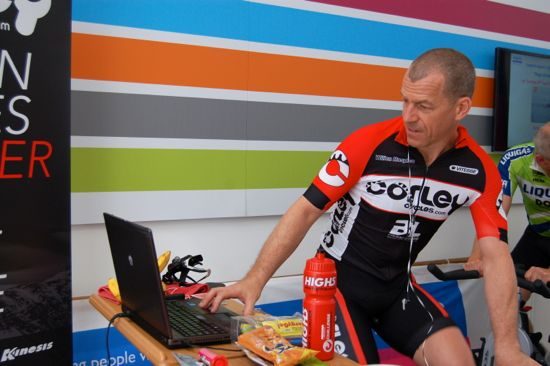 After the six hour mark I could tell myself “it’s all downhill from here”. Most of the Fundraising Team came down to cheer me on and I had a steady flow of staff and customers joining me on the spinning bikes alongside me.  At this point I felt beyond doing any more of the card tricks I’d been doing to keep myself distracted, as it was now too uncomfortable to sit upright on my saddle.

I was already in pain and could quite easily have just stopped. I’d never just sat on my bike non-stop spinning for over six hours ever before so this was all new territory. I’d held off for a long as I could but I just had to take my first comfort break. Just one minute and twenty seven seconds later and I was back spinning – but a little more comfortable.

Although I’d been trying to tweet, text and email, plus take phone calls as well as doing card tricks whilst spinning I got to a stage where I just didn’t want to know. Seeing the fundraising total rise and then reading some funny texts really lifted me. Then, with three and a half hours to go, I accidentally thought I only had two and a half hours. My head was all over the place and I couldn’t remember how often I’d been drinking or what time it was that I last had something to eat. I’ve never eaten so many bananas in one day before!

When I finally only had three hours to go I felt some relief. But three hours is still a very long time sat in the saddle, non-stop spinning, with saddles sores that were already so painful it was a struggle to sit.

Ten hours completed and only two to go: my legs felt amazing and were operating on auto pilot but the saddles soreness was proving troublesome. 120 minutes was all I had to complete and I knew I could play mental games with myself to keep me going. 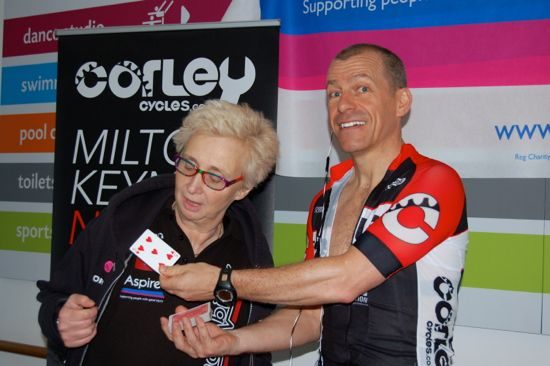 Children were coming in with their parents for swimming lessons so I was having to do more card tricks than ever before. I was in agony sitting upright on my saddle, my hands were sweaty and my cards were sticking together. If it helped people donate then I was up for it. It actually worked as a bit of distraction and help time pass a little.

With one hour to go I knew I was going to do it. The pain was just constant but I knew it would be over soon. All the office staff had left the for the day and were probably already home and I was still spinning. Emma (my wife) arrived with thirty minutes remaining. The Deputy Mayor, Camilla, had popped back to see me and make a donation having already visited earlier in the day.

Well-wishing text messages were coming in fast and furious. “FIFTEEN MINUTES” I shouted to the small gathering in the reception area.  Before I knew it I was shouting “TEN MINUTES” and then “FIVE” and then we all counted down the last five seconds. Time for a few photographs as my legs continued to spin past the twelve hours with a mind of their own.

What a relief to get off that saddle, have a glass of bubbly and have my legs massaged. It’s now the following afternoon and my legs feel great but unfortunately it’s going to be a couple of days before I can get back to cycling. Thank you so much for your support, words of encouragement, crazy texts, emails, phone calls and generous donations. You have made my pain worthwhile.

Editor’s note: Brian tells us that in the 12hrs he remained in the saddle, he completed over 64,000 revolutions, burned 7,000 calories and cycled approximately 300km. His JustGiving page is still open here

Save 51% when you subscribe to 220 Triathlon - the perfect Christmas gift!