I was sat in a pub in South Wales after a satisfying day spent mountain biking when I first heard about the Brutal Triathlon (writes Jane Manning). With a name like that it certainly promised to be a gruelling race. A week later I was a fully paid-up race entrant, and reality began to set in.

Yeah sure, I’ve got a soft spot for challenges. And admittedly I possess some of the character traits that tend to be associated with the sport. Perfectionism. Determination. A need for structure. A deep-rooted love of all three individual disciplines. It borders on obsession actually. But at that point the sum of my triathlon experience consisted of two meagre sprint races, both of them flat and road-based.

What had I let myself in for?

Piling on the pressure

I entered the Half Brutal – the shortest of three Brutal races on offer, all set in stunning Snowdonia. But still, this is a half-Ironman distance triathlon. Not exactly the most sensible pick for someone who has their ‘L’ plates still firmly zip-tied in place.

Especially given the added bonus features that come free with the scenery: the 1.9km swim takes place in a cold, murky lake, while the road bike section is 95km long and (unsurprisingly for North Wales) quite hilly.

But the real jewel in the Brutal Triathlon’s thorny crown comes last of all, on the run. It’s not just any run. Not just any off-road run even. After a quick 8km dash to get the body accustomed to moving without wheels again, this bad boy takes in a 7km ascent followed by a 7km descent of Mount Snowdon itself.

Reading the description, I knew this race was like nothing I’d ever attempted before. To keep myself motivated between long, lonely training sessions, I piled on the pressure by telling all my friends and family what I had signed up for.

Like all good sporting novices who haven’t stung their acquaintances for sponsorship money before, I started fundraising too. So I spoke of the race often. But the words that came out were just that – empty words. I was going through the motions, but I had no idea what it would be like, or how I’d fare, on the day.

And then the big day came. Saturday 21st October.  After six months of what had felt like slow-motion preparation, suddenly everything seemed to be unfolding in double time. One minute I was waking up in a B&B in Llanberis. Then I was scoffing breakfast. Then racking my bike. Arranging my shoes and equipment in transition. Lovingly covering everything with a generous sprinkling of talcum. 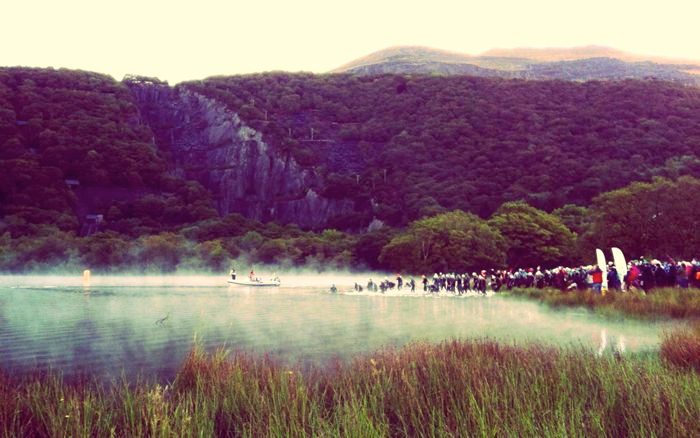 By 7am I was standing beside Lake Padarn readying myself for a refreshing swim. Then wading in. It was cold. My goggles were smeary. “Damn, I’ve got baby oil on the lenses”, I remember thinking.

Then suddenly the whistle blew. I hadn’t even had time to deploy the widely used, but less often discussed, wetsuit-central-heating technique. Now it was too late. So I followed the rest of the swim-cap-wearing crowd, and started swimming.

Two laps later I came out completely disoriented and dizzy and staggered up the field to the transition tent. Here I stripped off my wetsuit, donned my bike helmet, my heavily-powdered socks and shoes, and ran to my trusty steed. It was a bit drizzly but I barely noticed.

I instructed myself to absorb the panorama – looking up to appreciate the mountainous landscape between gobbling energy gels. Then came the fog. And many kilometres where I saw no other cyclists. But I had my watch for company and the seconds continued to tick by reassuringly, spurring me on toward my target finish time of nine hours.

And all of a sudden I was making a breathtaking descent into brilliant sunshine. Snowdon loomed ahead of me as I pulled back into the transition zone. Spectators cheered. I’d brought none of my own but that didn’t matter – support crews are generous to everyone at this kind of thing.

A first meeting with Snowden

But before the mammoth climb began, there was first that flat (in relative terms) 8km run. The course took us around the same lake we’d swum in hours before. It felt like it was over almost before it began. Suddenly I was tugging on my mountain pack (a rucksack containing various bits of emergency kit), and it was time – time for my first meeting with Snowdon.

I thought we were taking the easy route up. Nothing felt easy about this monster. But I was determined. And focussed. Every runner that went up this path was going to be coming back down the same way.

My eyes were peeled searching for that first exhausted triathlete. I wanted to be able to count them home, so I’d know the position of my boyfriend Dave, who was racing too. I had been casually informed in transition that I was the first female to head up the mountain.

But there must have been some mistake because I couldn’t possibly be winning. I thought Dave might need to be told his whereabouts in the pack too. He was bound to be near the front, so having it confirmed might lift him if he was looking tired.

And then there he was, springing down the rocky trail towards me. He needed no encouragement but I told him his position anyway. We high-fived as we passed one another. And then I was on the final section of the ascent. Others were around me. But I felt like I was on my own. 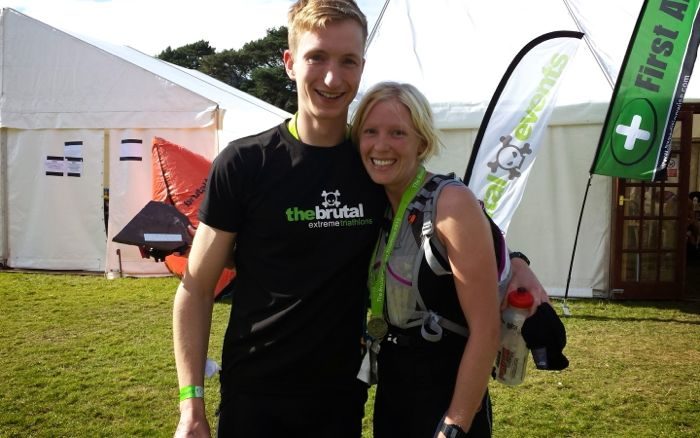 The muscles in my legs were screaming as the pain of the burn grew to excruciating. At the summit I almost cried with relief. I greeted the lady at the turnaround point with such emotion that she held me there until I’d squeezed another gel down my throat. And then I was off. Down, down, down. Leaping over rocks. Skidding over slate. Legging it as fast as two extremely tired legs could bear.

And then I clipped my toe on a vertical stone. Floundering in mid-air for a moment before landing heavily (luckily) back on two feet. And then I slowed slightly, engaged my brain, and repeated “lift your feet” to my weary self. And carried on.

Through my bleary vision Llanberis swelled gradually larger, as if magnified, as I drew nearer to the bottom of the mountain. The finish line was just around the corner. Then it was within sight. Then there was Dave shouting me on. And the big inflatable finishing arch was right in front of me.

I set my sights on that beautiful blue timing mat.  And heard the welcome beeeeeep as I stepped on it. And then it was over. I’d finished. A finishers’ medal was being strung around my neck, by Claire, the race director. Who also handed me a slate trophy which read “First Female. The Brutal Half-Ironman.” I’ve never been so happy to hold a piece of rock.

Hugs at the finish line

And then came the hug I’d been racing to the finish for. Dave had come fifth overall. Top five! My fatigued body spilled with pride over his achievement. I was 13th overall, finishing in 7:14:22 – over one and three-quarter hours ahead of the time I’d predicted for myself.

Our other friend Roland came in soon after me, hobbling slightly from an injured knee. Roland, who had to fix a puncture mid-cycle, had posted a disgustingly fast time on the bike regardless. There were smiles all round.

And then recovery shakes, and some cheering of fellow competitors. A nap. Some more cheering. Dinner with newly-made friends, united by shared stories from our unique day. And then eagerly-awaited bed.

We woke up the next morning and for us the race was over. But others were still going. Our race was just the Half Brutal remember. Others had been completing the Full Brutal overnight. And just a few more were still finishing the Double.

Yesterday they seemed like another breed of human. Today, full of the confidence that comes from a good night’s sleep, I found myself thinking “Maybe next year…”.