And so we went to Sweden for the Ironman, myself and the good doctor (half mad, half cocker spaniel). With the doctor, his female companion (an age-group podium competitor); and with me, the Korean, a splendid man, as strong as an ox – he would be our directeur sportif and photographer for this crazy expedition.

The planes went to Copenhagen with all our stuff on board – bikes and bike boxes and all kinds of clothes, tools, helmets, bolts, screwdrivers and equipment; and we had sustenance, plenty of that – ultra high energy carbohydrate gels: I knew we’d be into that rotten stuff pretty soon.

The men and women on board were grim-faced and wracked with nerves at what lay ahead: 3.86k of swimming; 182k of cycling and 42.2k of running. A triathlon of sadomasochist distances and the preserve of the slow burn, slow twitch maniac in search of something to twist the body and mind in a long cooker of black pain; the Ironman, Kalmar, Sweden edition.

Across the Swedish countryside we go

From the air we switched to trains, across the Swedish countryside they raced at a furious pace – no let up here, none – and all the while the men and the women supped from their water bottles and scrabbled for fruit and nuts, trying to relax but fixated – chattering – on what was to come. 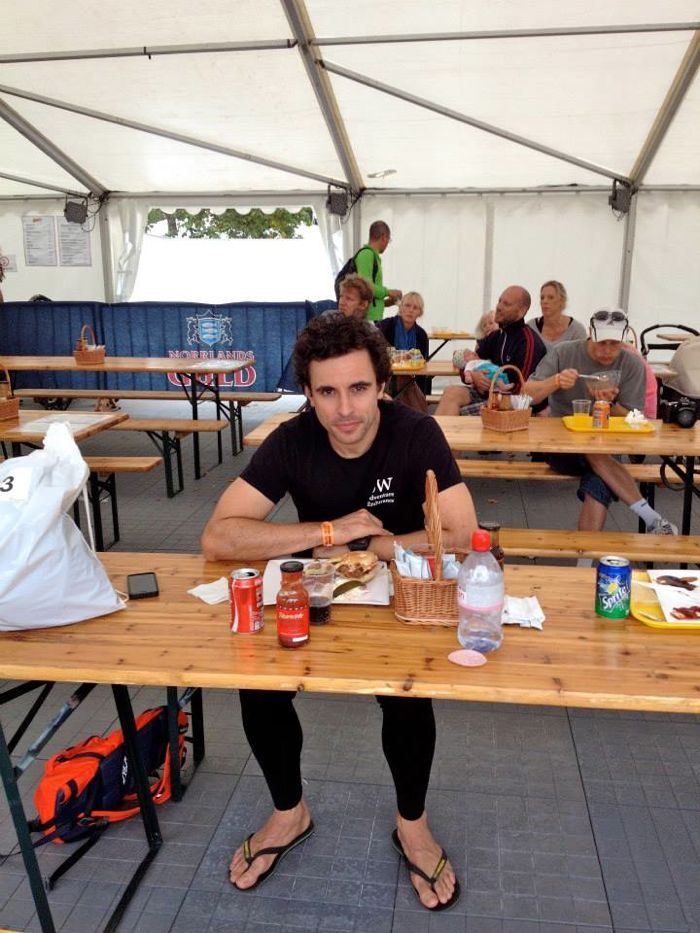 One day to relax and survey the course; that night to attend the pre- race party where 2,500 athletes packed into an aircraft hanger to be exposed to ‘the rules’ at high volume through a microphone.

The course looked complicated – no brain space for this kind of information. Follow the man in front. Pasta was served.

The ‘M-Dot’ was all about us. Many had the thing permanently inked into one calf – we were the willing, the believers. Pass the Kool-aid. More pasta please. I return to the tent.

The next day: registration. Everywhere you looked lean, hard bodied Nordic triathletes – many the colour of teak – in assorted combinations of luminous and equally ludicrous compression clothing.

The ubiquity and uselessness of knee-length socks. The commentator blazed away – slipping in and out of insanity – and said there was £9.5 million of kit in the transition area to be raced the next day – rows and rows of bikes that look like space machines with disc wheels and viscous looking aero bars. Lanky triathonauts lining up to rack their bikes, aero helmets everywhere.

What did this all mean? A king’s ransom paid for an aerodynamic bike to shave off seconds and yet most were lumbered with a collection of water bottles, pouches and other equipment.

I was on a Planet X stealth; a fast white bike, a minimalist approach – just the one water bottle (refreshments every 20k) and a cycling shirt chock full of some 30 sickly gels and bars. I prayed to the lord of straight line speed.

That night, the night before – nerves, creeping nerves; no two ways about it: something to be done tomorrow, oh yes. The unknown – ‘would I finish?’ Well. A puncture at kilometre one could end it all, the dreaded ‘wall’ could come at any stage – I’d never completed any of the distances even individually.

In the tent that night, some part of the mind knew what I was about to do and made a last desperate attempt to stop me; ‘shush now you, back in your box, we’ve never let you down so far – hold fast!’

Mating season for the lunatics

Then the race. The swim was an exercise in savagery, a washing machine of closed fists and wrestling moves – sharp nails everywhere and no space, none. We middle-of-the-pack swimmers were like salmon thrashing ourselves to death, desperate to spawn.

We had all day to race and yet here was a man placing me in a headlock, here another punching me in the nose – ‘why thank you sir!’ Mating season for the lunatics in neoprene. Death for the purist swimmers.

No time to think about the day of racing and relax, this was pure survival. Technique went out the window; what madman marked out this swim course with so many pinch points?

Into transition and the small tent provided to shield the public from nudity and worse was overflowing with men – and I was one of them – desperately squeezing into lycra. It was onto the bike and into the unknown.

Cycling in the air

Quickly now, up onto the Öland Bridge and its five kilometres suspended in the air – battling at times to stay upright. The wind had picked up and was a cruel mistress, laughing sideways at all the carbon on show – sometimes behind you blowing you forward at a hellish pace, but mainly in your face and to the side, at once blowing you over and making you grind out the kilometres.

The crowds cheers us on nonetheless through hours and hours of cycling, not in a bunch you see but one by one, no closer than ten metres apart (closely watched by marshals on motorbikes) – a procession of lycra and carbon fuelled by a hundred thousand energy gels and god knows what else.

‘What possible purpose could this serve?’ That part of the brain had come back very quickly: ‘you can’t do this’; ‘why bother to do this, just stage a small crash, call it a day and blame it on a mechanical’.

‘No you twisted b••tard, we must push on… together – get behind me and power on legs’. ‘Concentrate’.

And now the good doctor is here, beside me as I call out and smile. A friendly face in the wasteland of the eastern side of Öland Island. We can’t draft but we go at similar speeds within eyesight and drive on longing for the marathon to come.

Occasionally we shout encouragement over the void. Only by counting down in tens of kilometres did we get back to where we started (some strange sport this) to refuel, to refresh, to rethink perhaps.

In the transition area I darted quickly for a portable loo and opened the door to find a straining, red-faced man shitting into the darkness with lycra round his ankles, fingers to his temples and an aero helmet still in place, still shaving off those vital seconds. Nobody could help him in that moment – if Elvis had been addicted to endorphins and not cheeseburgers he might have gone the same way. 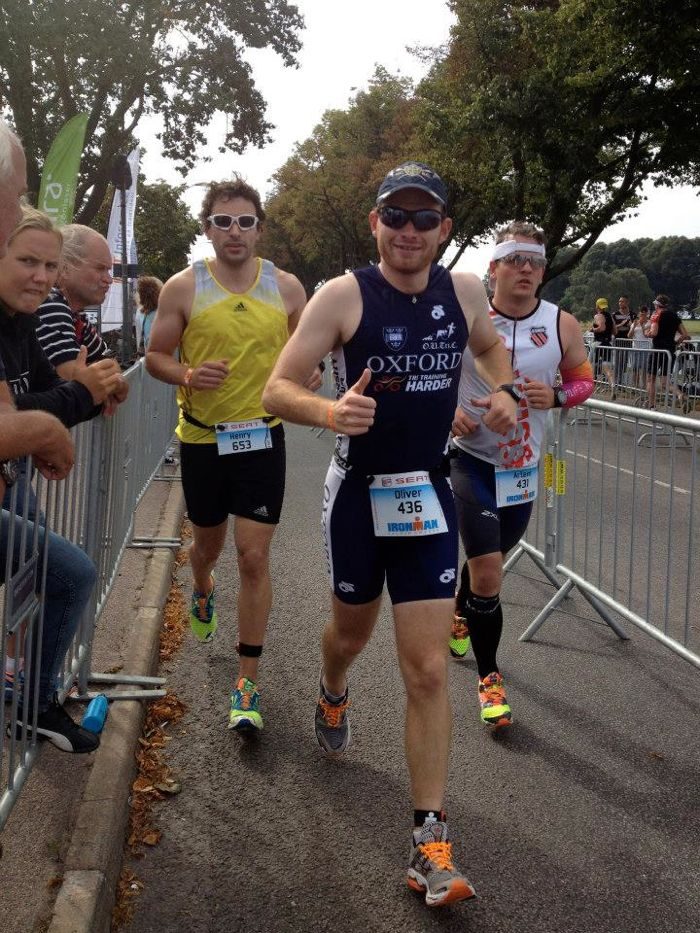 Three laps with supporters everywhere, the first is slow and easy, the second is hell as the end seems further away than ever and by the third you just need this to end by any available means.

A man squats, defecating in a bus stop on his first lap – this doesn’t help anyone. But everywhere Swedish supporters cheering ‘heja heja heja’ and driving on the masses wondering, perhaps, why anybody would choose to do this.

All the time you creep closer, closer to something – an achievement in itself no matter what time you finish. Heroes all. It’s not curing cancer or making the Olympics, but it’s something you probably never thought you could do and something that lots of people never even knew you could do.

Here now, it’s the Korean! Shirt collar turned up and cycling wildly on his rented push bike, following the runners! ‘Go on! Go on! Almost there!!’ he shouts, before an over enthusiastic marshal takes him aside and admonishes him for coaching. The rules!

The end comes near

Time for the finish; so tired now, barely making sense of anything other than that kernel of knowledge that the end is in sight. The end comes, as it always does, at the beginning: 12 hours dead for me.

Two stands of clapping Swedes welcoming me in and a man with a megaphone, half-crazed with the power of M-Dot: ‘you are an Ironman!’ he screams, rolling the ‘r’ in a curious way that is repeated by the crowd: ‘Ironman! Ironman! Ironman!’

The good doctor finishes shortly after, already talking about ‘the next one’ like it’s a round of golf. I slip into an ice bath and dream of pizza.