After my 2012 season was written off due to a serious medical condition, I was determined to get back and prove I could still complete long-distance triathlons.

Having taken part in the UK’s first Double, Triple and Deca Iron-distance events, the LLD immediately grabbed my attention as it was not only a challenge but the racing was point-to-point, something new and would add the dimension of varied terrain and navigation.

I was probably the first to part with cash for entry, putting this as my A race. My first comeback step was Forestman in June, which I finished but in rather a disappointing time despite the high winds. July saw me take on The Anglian, a new race in Cromer which had my first point-to-point sea swim.

Steve, Tina and I drove down to Land’s End on a Wednesday, encountering heavy fog from Dartmoor onwards. Thursday was registration, with more fog about although there was a short sunny spell which allowed us to view the great scenery.

There was a bit of a panic as one of my run crew advised that he could no longer help out with the run and was no longer available. Luckily, Jonathan stepped in to take his place at very short notice and proved to be a great asset.

The forecast was possible fog and 35kph north-easterly winds for Friday, which was not what we wanted and which put me in a dilemma on when I should start. 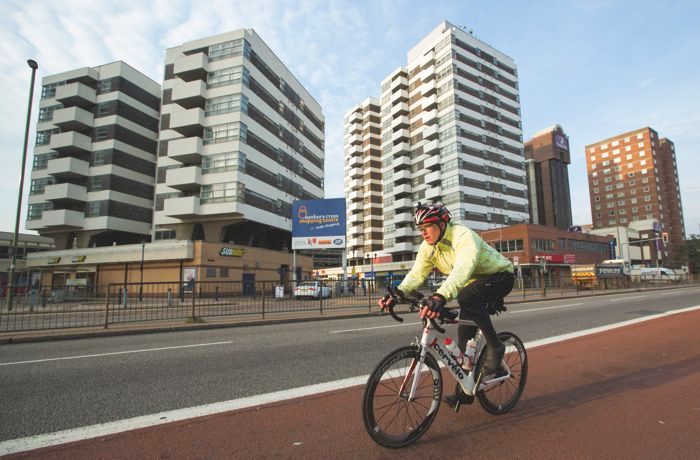 This race allows you to start anytime between 4pm on Thursday through to midday on the Friday, with your clock starting at that point.

My original plan was to leave at 5am on the Friday with my friend and fellow competitor Paul Parrish, but after much umming and ahhing we decided to leave at 2am.

Three of the competitors decided to depart between 4pm and 5pm on the Thursday, and it seemed weird seeing them off.

After doing my final preparations I tried to sleep, but my body clock kept me awake so I ended up in the bar with a Guinness.

The wind was really getting up and I could hear the howling outside but I did manage to get about three hours sleep.

Getting up at 1am was not pleasant. I started my bike a minute after Paul at 2am, heading straight into the wind and getting wheel wobble on the first decline, which made me regret putting on the deep rim wheels.

I almost stopped in the first 8km with a view to changing to my backup bike, through luckily I hit a tree lined section which made things a little easier.

Paul and I kept pace with each other for the first three hours, supported perfectly by our crews who helped with the lighting, as the roads were nice and quiet.

The roads were undulating and descending in the dark at speed is definitely not for the faint hearted. The last I saw of Paul was trying to enter a MacDonald’s, no doubt in search of coffee.

Just before dawn saw the first of the killer climbs – a big wakeup call on what was ahead as I continued towards Dartmoor. My progress was nice and steady and my crew Steve and Tina made sure that I was eating and drinking regularly.

There were lots of long up and downs leading up to Dartmoor which sapped the strength, with a final climb of over 2km leading up to the edge of the park.

In normal circumstances the hill into the park would have been okay, but exposed to the full force of the wind it was torture.

On getting into the park proper there was no shelter from the wind, it was foggy and the temperature dropped noticeably – and with it my mood and progress. Kilometres were ground out and in places I could  probably have walked quicker.

Eddie the race director crept by in his car and when I took my eye off the road to look round I was promptly dumped on the verge, which thankfully was soft. No damage done apart from to my ego.

After what seemed like hours, I reached the easterly part of the park, where things improved slightly as the wind wasn’t totally in your face and the fog had lifted.

My crew improved things further by delivering a hot cup of soup. With my spirits up I continued out of the park and on towards Exeter.

I did hear from my crew that Paul Parrish had decided to take a sleep break after enduring the worst of Dartmoor, and I also found out that the tracker I had on to provide live updates to the world was noted as belonging to Paul Parrish.

I progressed through Chard towards Dorchester as darkness came down, and then it was on to Blandford Forum and then Salisbury, which was roughly two-thirds of the way.

Andover and Basingstoke were ticked off with Staines next on the list, and I started to entertain thoughts that I may even have time for a short sleep before my swim start at 9am.

There was a horrible spell on the gridlocked A30 into central London where I decided to get off my bike and cross to the other carriageway, taking a right turn in order to keep going, and hoping that my crew would catch up later.

Chris helped with some of the navigation through Putney, Chelsea Embankment and over Vauxhall Bridge. Traffic was awful.

I did bump into my support crew on the way down to the Charlton Lido, as they had somehow got past me. I arrived at the Lido at 11pm, hours away from my predicted time and having run out of food and water – not the best way to start a swim. 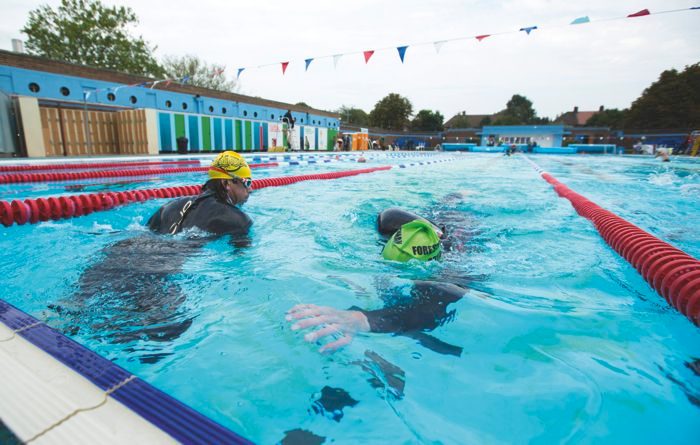 The atmosphere at Charlton Lido was very relaxed, and after taking ages in T1 I started the first of 228 laps of the 50m pool. I eased into the swim and focused on getting in the energy drink and gels, steadily oblivious to any time constraint or how fast I was going.

It was obvious I was the slowest swimmer but I had it in my head that I was comfortable on time, as the swim needed to be completed within the window of 9am and 5pm hours.

Around halfway into the swim I asked the timekeeper how I was doing, who told me that I would struggle to complete in time if I kept to my current pace.

Panic set in and I increased my pace significantly: muscles were soon protesting, nutrition was skipped, all I could think of was completing the swim, and it became a bit of a nightmare. I cramped up several times, which made pushing off the side and proper use of legs nearly impossible.

Soon I was the last person in the pool, and I knew this was going all the way to the wire. I didn’t even hear the shouts to say I had finished, and only knew when Simon ran to other end of the pool to stop me doing any more extra laps, adding that due to dropouts I was now in the lead with an eight-hour cushion over second place. 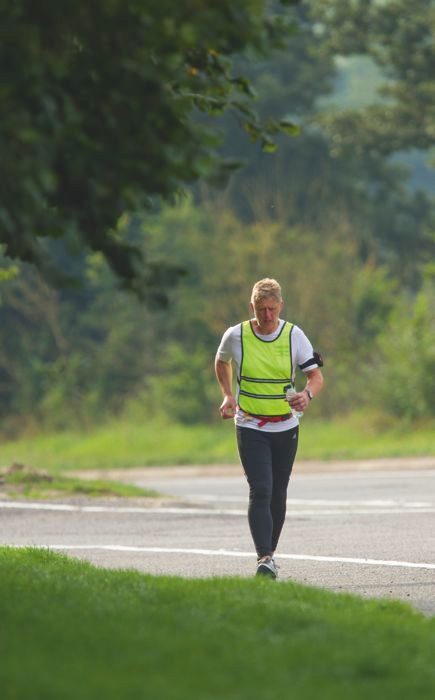 The exertion of the swim, time in the water and poor nutrition had left my hands and feet in a horrible white, spongy state, which which would cause me a few problems later on.

Over an hour after the swim I started the last leg of my journey. Very soon I had covered 10% of the run and was feeling surprising good despite exertions and being awake for 42 hours.

Further down the road I met up with Judith and we ran and chatted for a while. She was in good spirits and I kind of knew that she would make it to Dover.

We drifted apart just before Maidstone, which was a bit surreal to go through as the locals had just exited the pubs and clubs all dressed up in their posing gear, and there was me with head torch, running gear and safety vest!

After a very good purple patch of running in the early hours of Sunday the inevitable happened and I hit a ‘wall’, which started with a lightheaded feeling, followed by drunk-like symptoms. I had been going for over 48 hours with no sleep so it was not really surprising.

I knew I had to sleep so I stopped and asked my crew to wake me up in 10 minutes, which they did manage although I took a long time to come round and required some coaxing.

I started running again and after a while my system woke up, helped by the appearance of dawn. My feet by this stage were really sore to run on, a result of continual dampness and a stupid decision not to change my shoes or socks but continue on.

Upon entering Ashford I knew I needed to do something about my feet, and me crew arranged for the medic to look at them.

They looked deathly white and the skin on one of my little toes was rubbed raw.  Bandages, clean socks and shoes were applied, which helped a bit, but running was very uncomfortable and I still had over 35km left to go.

My energy levels were okay but future progress was a slow trot walk – a bit of a downer. My crew were great, never complaining, making sure I was eating enough and providing encouragement.

There was a short section on a stony track beside the Eurotunnel yard which was very uncomfortable on my wrecked feet, followed by a long tough hill up through the outskirts of Folkestone.

Eventually I reached my goal just as the light was going, crossing between the Dover Channel Swimming posts after 64 hours and 52 minutes.

I tried a mini sprint and tried to get the arms up for the finish but neither really happened – I was just pleased that I had made it. 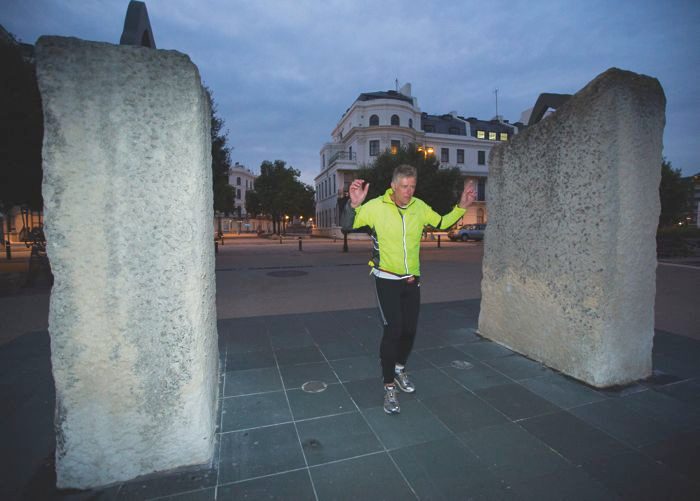 Coming first was a great result for me, especially as it was so unexpected, but credit needs to go my crew, Steve, Tina, Simon, Jonathan who all played a key part in getting me to the line.

This is definitely a team event and I would recommend for future races of this nature that you should always have a minimum of two crew members at any one time.

Hats off also for the Enduroman team for putting on this great event, as it is no mean feat to organise a point-to-point race over these distances.

Entries for next year are now open but be aware this is a tough race both physically and mentally, so prepare accordingly!

Looking back would I do it again, and there are some things I could do better, but one thing is for certain – I hate cycling in London…