It’s 8am and I’m on the beach at Calella, Costa del Sol, 47mins before the start of the Barcelona Challenge Iron-distance triathlon.

I’m ready and prepared, wetsuit over shoulder, tub of wet wipes in hand ready for the inevitable last-minute dash to the portable toilets. My guts are turning like a windmill as the anticipation builds.

This is my first race for 27 months following a knee operation and a round of associated injuries, which forced me to drop out of the National Middle-Distance Champs in June while leading my age group (65-69) on the run.

I returned to running three weeks ago and have done three five-milers since. Not the best prep for a marathon to say the least. Beside me is my pal Norman Purnell, a young whippersnapper competing in the 60-64 group.

Norman is equally anxious as he cleverly managed to drop a load of builders’ rubble on his foot a few weeks back, smashing a couple of toes. So we’re both raring to go!

Bang, the gun goes and we’re off. The usual mayhem ensues, kicks and thumps on both sides.

The rest of the swim is uneventful, and it’s soon transition time and out on the bike. This is a great course with closed roads and a good surface. From mile one I feel the need for a wee, but don’t want to lose any time.

I eventually stop sixty miles in, and once I started peeing I just couldn’t stop. People are flying by and I hate each and every one of them.

Eighty-five miles in and the rain starts. Costa del Sol? Baloney. Costa del Deluge more like. We pass through one little town with the water halfway up the spokes towards the hubs. God knows how the paratriathlete on the recumbent bike managed. Must have been like canoeing for him. Big respect.

On to the run and out comes the sun again. Well, it did for a lap and a half at least, and then it’s back to chucking it down. I’m six miles in and see Norman approaching in the opposite direction. Hey, we’re not exactly Macca  and Crowie but we’re still moving.

Give each other a high-five and get stuck in again. It’s a four-lap run, and at the end of each lap you pass through the finishing area with a racked and seated gallery. I distinguish myself at the end of the second lap by going completely arse-over-tit in front of everyone. Smooth.

Get up with my arm and leg streaming with blood. I pretend it doesn’t hurt, obviously. We’ve all been there. You put on the big brave act until you get around the corner and then have a little cry. Bad enough when you’re fresh, but with 13 miles to go, well…

Resisting the urge to help

The next two laps are in the rain and dark, but while feeling sorry for myself I pass a paratriathlete trying to get his wheelchair across a big section of astroturf. Easy for runners, but his wheels were sinking in the surface and he was pulling his guts out just to move.

Instinct tells me to help him but that would get him disqualified. All I can do is encourage him as I pass and refocus on what a lucky so-and-so I am to still be in the game at my age.

Eventually the end comes, and as usual it is just fabulous to finish with all the finish-line hullabaloo. In the recovery area someone takes off my compression wear as I just haven’t got the strength. Then it’s off to retrieve my bike and back to the hotel feeling duly knackered but ecstatic.

I’m back. More than two years out and I’ve just finished my first race – and Iron-distance at that. I’m uninjured apart from a bit of stiffness and a huge blood blister (medals to athletes!), but the best is yet to come. 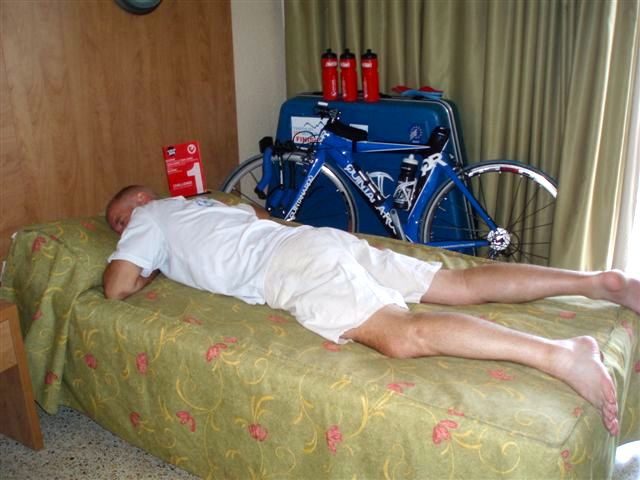 No longer lower than a worm’s willy

The following day is the awards ceremony, which I attend with my long-suffering and very supportive wife Sue, only to find that I’ve won my age group and Norman has come second in his!

Life is suddenly good again, especially compared with June when I dropped out of my last race injured and my mood was lower than a worm’s willy.

On the podium I was beaming, but the most memorable moment was when the paratriathlete I saw earlier was lifted in his wheelchair on to the stage and then hoisted himself on to the podium in the sitting position.

Standing ovations have become devalued these days with politicians and rock stars getting them as a matter of course. The place erupted for this guy.

This was a room full of athletes who had all suffered and who appreciated the superhuman efforts involved and the challenges which our disabled colleagues had overcome.

So that’s my 15 minutes of fame. Hopefully there’s more to come with my reconstructed body holding up.

As Churchill said: “When you’re going through hell, keep on going.” And remember that paratrier. 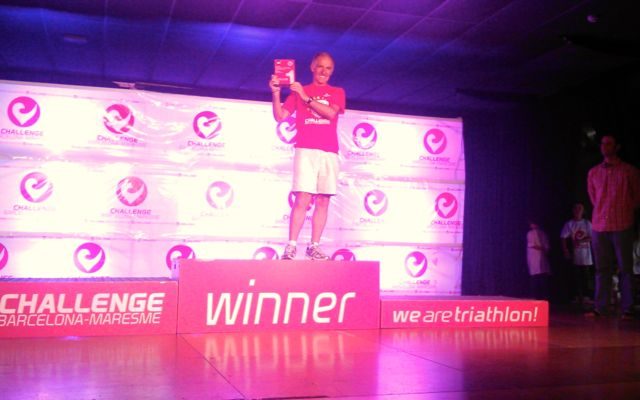